Part of being a good blogger is ripping off ideas that you read elsewhere and using them as your own. I totally didn't do that here, I'm not stealing this from anyone, this was totally my idea. And I think it is a good one.

This is 100% arbitrary, it is voted upon by your TDG staffers and then I make the top 10 be whatever I want it to be (which may or may not be based on the votes of the others). You get the idea. So with our further adieu, here is your week 2 Golden Gopher power rankings.

5 more guys after the jump 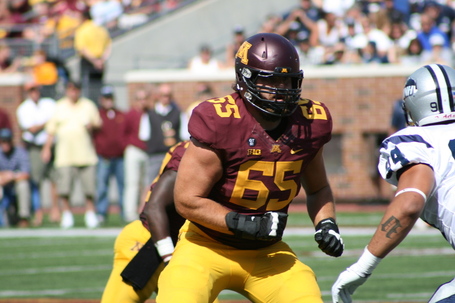 Why He is Here - Has also been rather consistent and through two games is penalty free (unlike that screwball brother of his, j/k). Ed got a fairly high ranking from Jeffrick and none of the rest of us voted for him. But it was enough to sneak into the top 10.

Jordan Wettstein and Isaac Fruechte were close to cracking the top 10. Christian Eldred, Martez Shabazz, Mike Rallis and Roland Johnson received votes. Did we miss anybody? Who are your top 10?

A chance to see some of the names mentioned above in the New Hampshire highlights...