Welcome to your Thursday Nugz! I don't know about you, but I think the weekend needs to hurry up.

So, before we get to any stories, I just want to look longingly at this image. What's that? The Gophers are tied for 1st place in the division? I'm just going to bask in this while it lasts. 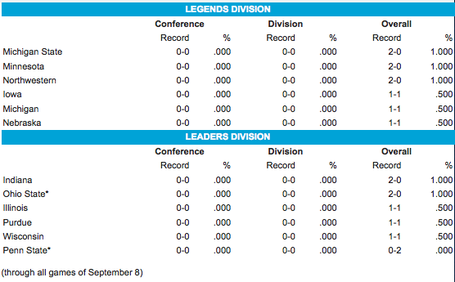 - Fuller writes about one of my favorite things to watch, the TD scoring combo of Gray and John Rabe. I loved the ridiculous stat lines where the majority of Rabe's catches are for TD's. I wish I was playing college FB fantasy football with him on my team, that's for sure. The pair worked hard on their timing and communication over the offseason, improving their relationship considerably from what it was:

Rabe admits he didn't know Gray that well last season, only talking to him "here and there."

But since December, Gray and Rabe have grown closer. Gray says they're both "real cool, mellow guys who don't say too much."

"But when the time is needed, he's going to step up and let someone know about (something)," Gray said. "He's like myself. But I have more of a goofy, happy side."

Rabe's TD explosion is interesting given that TE's typically don't pass catch a bunch in a Limegrover/Kill offense. While he may not see as many passes as the Mason TE's used to, he is already halfway to tying the single season record for TE TD's (6). I hope he breaks it.

- Sandell looks at the improvement from the D-Line and the sack competition between Wilhite and Hageman. A sack competition. Anyone else excited to see such a thing from a Gopher defense?

Junior defensive tackle Ra'Shede Hageman and senior defensive end D.L. Wilhite already have the group three sacks away from surpassing its total from a year ago. All six of the Gophers' sacks this season have come from the line.

The sack count being kept among members of the line is all in fun, though it doesn't mean guys don't want to be at the top of the list.

"You try not to count too much, but we're all trying to keep counts and push each other to see who can get the most," Wilhite said with a smile last Saturday after the Gophers' 44-7 win against New Hampshire.

Plenty more Gopher links, the kicking game version of eHarmony comes through for Kill, basketball recruiting, and why Iowa fans are not smart...all below the jump...

- FSN notes that while everyone is happy to be 2-0, Kill and they players are saying the right things and aren't ready to get too excited.

- The STrib has a video of Kill and Gray that hits the same notes.

- Phil Miller talks more about how Christian Eldred ended up at Minnesota.

One party was mailed a videotape of the other, and in repeated viewings, grew more and more infatuated; the other received only verbal descriptions and assurances about his potential partner, but somehow he sensed that it was meant to be. After months of anticipation, a face-to-face meeting was arranged in March. A whirlwind courtship ensued, before the question was popped and the engagement was set.

And that's how Jerry Kill ... fixed the Gophers' field-position problems.

Or in this case: ProKickAustralia, the Internet site that helped Minnesota and punter Christian Eldred find each other.

I'm glad he's here. It's nice to see punts that aren't shanked all the time.

- Injuries continue to slow Brandon Green says The Bearded One.

- The paper from the hometown of WMU QB Alex Carder profiles his rise from hometown kid to prolific MACtion passing machine.

- Fuller notes that Gopher TE Drew Goodger used to be a teammate of Carder's and looked up to him when in HS.

- MOAR PREDICTIONS...B1G Football Dude sees the Gophers winning by 10. So does CBS Sports. Jacobi sees us winning by 3.

- Gopher Sports has your one stop shop for WMU game info.

- On the marketing front, there is a big ad in The Daily from Coach Kill thanking the students for their big turnout last weekend and asking them to do it again. It will be interesting to see how it looks without all the frosh having free tickets.

- Recruiting, recruiting. Doogie says Tyus Jones still has the Gophers on his list. Scoggins say's that he is calling the shots in the recruiting process. Rayno also has a Jones update. Fuller talks to SG Cedric Hankerson about his visit this past weekend.

- Tubby talks about his contract extension.

- Nebraska's balloon tradition is back. I'm glad, I wanted to see this when I traveled down there in November.

- Jacobi put together a VERY in depth "What If" that wonders what it would look like if a horrid Indiana team made the Rose Bowl.

- Toledo has a new rivalry trophy. For one that just got created, it's not terrible.

- SB Nation looks at why the Notre Dame move could be very bad for Big East basketball. Something mentioned I hadn't thought of, the ND move means unbalanced divisions for basketball in the ACC. There are several schools in the Big East without football or without FBS football that would make nice bball additions to the ACC. Something to keep an eye on.

- The recruiting arms (or in this case, fingers) race.