So, Tuesday already huh? Now that the Gophers have won a few, does anyone else feel like the work week is a long, annoying pause before the Gophers play again? I mean, I've always felt like that during college football season but it's worse this year. Hooray winning streak! Hooray beer!

- I'm skipping ahead of all the real football stories to highlight something GN found. Chris Farley (yes, that Chris Farley) copied some of Joel Maturi's football coaching mannerisms for his Matt Foley character.

Maturi admits that Farley’s "Matt Foley, motivational speaker" (you know, the slightly unstable one who lived in a van down by the river) was based, at least in part, on Maturi’s habit of hiking up his belt and crouching into a football stance during his motivational speeches to the football team.
"Matt Foley is a little bit about me, I’m afraid," Maturi told the News Tribune. "I used to joke with [Farley], ‘You made a lot of money making fun of me.’"

So, that was not something I ever expected to read.

Scoggins takes a look at why QBGAZE could be a good thing for the Gophers:

Gray is a better runner and athlete, Max Shortell is a better passer. The offense relies on both facets, and the coaching staff trusts them in different situations.

So why not use both to maximize that position? It's worth considering to see if a tag-team approach provides some benefits.

Essentially, he's suggesting that the coaching staff consider doing what Northwestern has done with some success this season. And I have to say the idea intrigues me (despite the fact that I know that this RARELY seems to work in practice). To see what he might be talking about, check out this post by Lake the Posts on their QB situation and what the Wildcats are doing with it.

More Gopher links, Ron Burgandy has a message for Gopher fans, Beils earns a check plus, and the D-III play of the year all below the jump...

- The Bearded One says that it was Kill's decision making, not Max Shortell's play, that resulted in the offense moving to a grind it out style in the 4th quarter on Saturday.

- Shama looks at what Gray's injury might mean for the future of the QB position.

- FBT Rouses the Rouser with a more in depth set of thoughts on the WMU game. MV throws out some stats that I love and that I am going to steal and quote here:

On the season, an amazing 25% of all passing dropbacks against this Gopher defense have resulted in a sack, PBU or interception. Almost 20% of all passes against this secondary have been broken up or intercepted on the year; even if that figure falls more towards the B1G average of 14.0-15.0%, this is a markedly different passing defense than the last several years.

I'm going to guess A.J. gets a scholly.

Minnesota has allowed less than 4.72 yards per play on defense for five consecutive games. That happened only five times in the previous 35 games from Wisconsin 2012 to Syracuse 2009.

Plenty more goodness to be found. Check it out.

- Highlights, news, and notes from Gopher Sports about the WMU game.

- Gopher Sports looks at the big days had by both A.J. Barker and Max Shortell.

- A story from last week that we missed but that I liked and wanted to repost. It's a look at the player leadership council Coach Kill set up.

- The Gophers have 2 players in BTN's Player Rankings. Both are on the defensive side of the ball. Ra'Shede Hageman comes in at #2 and Derrick Wells is #5. Seriously, I will not tire of seeing this sort of thing.

- The Wiz of Odds put up Minnesota's schedule poster. Make sure to vote for it! (And yes, I'm the Chris that submitted it).

- The Gophers bring this hammer out of the tunnel with them every game. 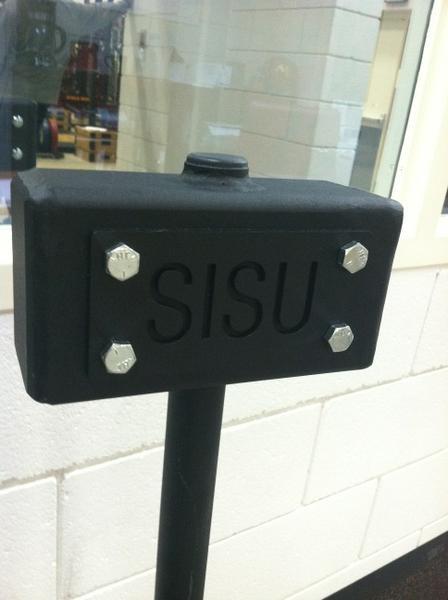 What does SISU mean? According to Asst S&C coach Chad Pearson:

- Ron Burgundy wants you to stay classy and come to the Syracuse game on Saturday night. 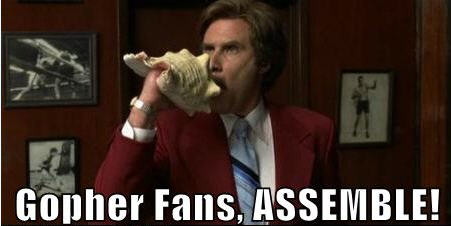 Speaking of which, from Doogie last night:

- OTE has this week's B1G Margin Call up.

- MOAR B1G Power Rankings...this time it's Athlon, and to be honest I have to wonder if they even bothered to watch any B1G games.

- Another reminder that when it comes to attendance, things could be worse. Exhibit Q, Illinois football!

So what now? Bielema is being secretive about his quarterback plans for this week against UTEP. O'Brien and Stave are listed as co-starters on the depth chart, but Bielema said at various points on Monday that the starting nod would depend on "how the week goes" and "how we handle this week." But he also said it's "not really a competition" and the coaches had a plan and the players know now who will start on Saturday.

"They already know what's going on," he said. "But you won't talk to them."

- Grape Job Brett! You're such a great little winner!

- National media members continue to give the Coach's Poll folks a check minus for keeping UW at #24.

- Something tells me these guys aren't going to be too popular at UW...

Three University of Wisconsin students have been charged in attack on Badgers' running back Montee Ball.

- Orange Bowl may redo it's tie ins to include a B1G team.

- So, how long until Tubby says he needs one of these?

The new dorm is built next to the squad’s academic support center and practice facility. And it showcases the differences between the haves and the have-nots in college basketball.

Kentucky just built another multimillion-dollar facility mostly to accommodate its basketball squad. It’s another way to set those athletes apart from the rest of the student body. And that exclusivity caters to former prep stars who are used to special treatment.

- That little Oklahoma kid from the Michigan t-shirt "banned from school" mess? He got his VIP trip to see the Wolverines play.

- You can add seeing ridiculousness like this to the many, many reasons tailgating at The Grove is on my overall sports bucket list.

- The quality passive/aggressiveness displayed by the Colorado SID staff during their loss to Fresno State makes me wonder if any of them are Minnesotan.

- This guy really wanted a touchdown.