Welcome to the 3rd week of the only Gopher gnome moderated B1G roundup on the interwebs. In case you are unaware, today is National Talk Like a Pirate Day. I seriously considered writing this whole thing in pirate before I realized what a complete pain that would be. The gnomes disagreed and decided to do their comments in pirate form. For their horrid almost loss against Utah State, the Badgers will once again lead off the segment. ARRRRRRRRRRGHHHHHHHHHHHHH!!!!!!!

This has to be the least inspiring 2-1 imaginable for Wisconsin fans (not that they ever bothered to imagine 2-1 in the first place). Their running game is still a mess, Montee Ball still had pedestrian YPC numbers, and they failed to convert umpteen 3rd and 1's. This is not Wisconsin football and I couldn't be happier. Bucky's 5th Quarter? Not so much...

What we're seeing is the stark reality of the challenges presented by a six-man turnover on the coaching staff. We're also seeing the true value of coaching geniuses (I don't think that's considered hyperbole now) like Paul Chryst and Bob Bostad. Bart Miller has generated nothing but praise, but you have to believe a great deal of it stems from the desire to put a positive spin on things after Markuson's firing. While barely escaping Week 3 with a 2-1 record indicates a tremendous need for improvement, I think a bit of patience is needed here for the coaching staff. Even with the whole summer and fall to get acclimated, nothing beats game action and game prep for the coaches. They say the same thing for players, who get all the credit when things go right. When they go wrong, though, the coaches are more often than not the all-too-easy scapegoats.

The fact that the words "hot seat" and "scapegoat" are even being used in conjunction with a coach who just brought his team to 2 consecutive Rose Bowls should tell you how things are going in Madison. Like I said, I couldn't be happier. And neither could the Gopher gnomes: 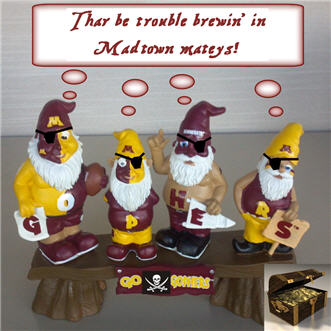 Up next? The mighty Miners for UTEP come to Camp Randall; 11am on EPSN2.

So whatever a Charleston Southern is, Illinois beat it. However, they did so in front of a dwindling number of fans. So Illinois' attendance issues are the national, well, regional story about the school this week. A Lion Eye is pragmatic about the victory.

I am a fan of a football team that lost 18 games in a row at one point in the late 90′s. Big Ten opponents, non-conference opponents – 18 straight losses.

So I have learned to never take a win for granted. Even against Charleston Southern, an FCS team with their own burgeoning losing streak. A win is a win is a win. Sure, we might not be able to take much from this game – it’s nearly impossible to tell if Justin Hardee’s eye-opening receiver stats are 100% a poor secondary with no coverage skills or if this kid really might make some noise during the Big Ten season – but we can take the win. A shutout win, thank you very much. With each mile of the drive home, I felt better and better about this dominating performance.

Up next? Louisiana Tech @ Illinois; playing against the Gophers on BTN @ 7pm.

Oh Indiana...Just when your fans were starting to complain that all of the B1G Power Polls were dissing you the Hoosiers go and lose to Ball State. Ball State has only 3 wins over FBS teams and they all came in recent seasons against IU. Anyone else see an 0-8 B1G record? Feel for The Crimson Quarry folks.

At some point, we have to start winning some of these. Well, this is the lot we have chosen by following this program. Let's see what the Hoosiers can do after two weeks.

Northern Iowa wanted this one. AIRBHG heard their prayers and took out 2 more Iowa running backs. But into the breach stepped fullback Mark Weisman. He risked the wrath of AIRBHG (all are equal in his eyes Mark...being a FB will not save you) and rolled off 113 yards on 24 carries. Enough to carry Iowa to the win. Thoughts, Black Heart Gold Pants?

It was the Iowa running game in general, and Weisman in particular, that won the day, racking up 204 yards and giving the Hawkeyes a 10-minute advantage in time of possession. Weisman did in in particularly satisfying fashion: quickly blasting through massive holes in the UNI front, never avoiding contact, running through gangs of Panther tacklers.

Word is that Damon Bullock is out for this weekend but that Greg Garmon will practice. No word on if Kirk has approved the use of animal sacrifices to protect his remaining ballcarriers. What say ye Gopher gnome? 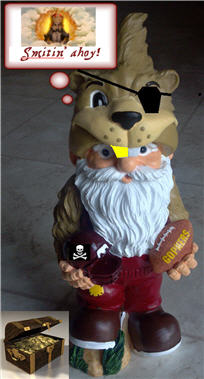 Destroyed Massachusetts. That is all. Oh wait, linky to Maize n Brew:

It was the type of day that, for all of the mostly cogent complaints about playing these sorts of games, exuded a calm, comforting glow.

That's a pretty wordy way of saying "We enjoyed watching UMass get beat up."

The conference's standard bearer went out and woke up the echos for sportswriters across the country by losing to Notre Dame. Nice work Sparty. The Only Colors sums it up in the first sentence of their recap:

Well, that was a disaster.

Yes it was. Please reserve future disasters like this one for the Minnesota game only. Mateys? 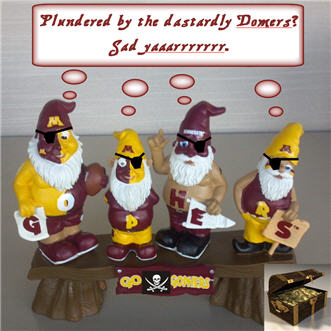 Up next? Eastern Michigan @ Michigan State; 2:30pm on BTN.

Bo Pelini went to the hospital in an ambulance at halftime. He's ok though, which is good. The Huskers played Arkansas State, so I have no idea what to take from the game. They won, which all that really matters. Corn Nation seemed pleased enough (minus the Pelini thing of course):

Well, how about that? Nebraska loses Bo Pelini to flu-like syndromes, almost falls apart in the third quarter but pulls it all together to win 42-13 over the Arkansas State Red Wolves.

As for the game, I think the defense was far improved, don't you? They only allowed two field goals against a well-regarded spread offense (#7 in country) attack.

Ah Northwestern, our annual nemesis at the top of the Legends West division standings. Wait, what? In a sign that the Mayans have doomed us all, Northwestern is tied with Minnesota for 1st in the division. I have no real ill will towards the Wildcats (other than their ability to win too many against Minnesota recently) so I'm glad that Fitz has put his team in position for bigger and better things. Sippin' on Purple is pleased with the record but recognizes that this win wasn't outstanding:

Northwestern regressed to the mean yesterday: after a couple of weeks with few or no turnovers and near-perfect play in the red zone, drive after drive stalled for the Wildcats leaving NU with a whole lot of yardage, but little to show for it. Regardless, they did work when it mattered: five field goals by Jeff Budzien were perfect, and that and a scamper by Mike Trumpy were enough for the W, and that leaves NU undefeated. That really bodes well - NU still hasn't played anything resembling a perfect game and still has yet to see the loss column.

Up next? A non-BCS opponent? Crazy talk. South Dakota comes to Ryan Field; 2:30pm on BTN.

The last of the undefeateds for the B1G, Ohio State struggled to put away a Cal team that seems quite mediocre. Land Grant Holy Land breaks down how this happened:

In Ohio State's toughest test to date, the Buckeyes came out sharp, completely imploded in the second half, then regained their composure when they needed to most. During the course of the second half, Ohio State saw a 20-7 half time lead melt down to a 28-28 tie with 8:10 to play in the fourth quarter. A Vincenzo D'Amato third missed field goal of the afternoon seemingly gave Ohio State's long stagnant offense new life, with Braxton Miller finding a wide open Devin Smith on a complete defensive breakdown for a 72 yard game go ahead touchdown giving Ohio State the lead for good in the process, 35-28.

A WIN! An actual, honest to goodness win in front of the PSU faithful. Now it's time to see if this gets PSU moving in the right direction or if they continue on their path to a much worse than anticipated season. Black Shoe Diaries reminds me why that won't really bother me.

He took our bowls. He took scholarships. He took every victory from the last 14 years. But on a perfect late summer day, one hundred thousand fans in Happy Valley still sang and cheered an (0 - 2) Penn State squad to victory over a winless service academy.

Up next? Temple goes to Happy Valley looking for that elusive win over Penn State; 2:30pm on ABC.

I'm still not sure what to make of this team. They've won the games they should in convincing fashion. They put up a good fight on the road at Notre Dame (who destroyed MSU at home). Yet I'm still not sold that they are for real. Hammer & Rails does the math and is pleased by their defense:

So far, Purdue has only given up 42 points on the season. Yes, we have played an FCS team and a bad MAC team in there, but we've also played a good Notre Dame team. Of those 42 points, 12 have either been scored by the defense or resulted because of a turnover that gave the other team the ball in field goal range. When the opposing team has had to move the ball down the field and get in scoring range our defense has given up 30 points in 12 quarters.

It is clear that said defense is going to keep us in many games this year and erase the mistakes of an offense that will struggle at times.

So, defense may win the day in West Lafayette. Something to keep an eye on. Gnomes? 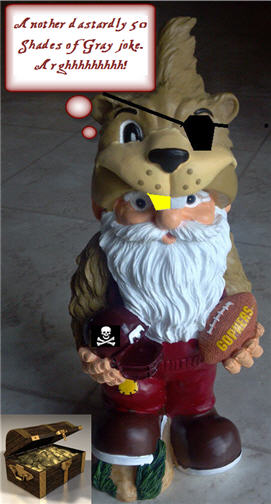