Share All sharing options for: Previewing Week 4 - The Syracuse Orange

So, this should be better than last week's preview. What's that you say? There was no preview last week? I don't know what you're talking about. It was AWESOME! So full of detail and information. It was practically a doctoral thesis it was so good. And this one will be better. Promise.

And here's how the hourly look for kickoff...

5-7 (1-6). Syracuse was 5-2 coming off a 10/21 victory over West Virginia. They never won again. They lost the final 5 games to miss out on a bowl. Yuck. Especially following what was a pretty impressive W over West Virginia. I'm going to guess the team and their fans were not pleased by this.

Syracuse has a tough non-con schedule by BCS team standards. They play 4 BCS schools (Northwestern, USC, Minnesota, and Missouri). Last week's game versus Stony Brook was their only BCS non-con (remember, only 8 teams in the Big East play football so their conference schedule is only 7 games). So...that's not easy. They are 1-2 thus far and there is a lot of talk of them being the "best 1-2 team in the country." I think that sort of talk is pointless (you're 1-2, the quality of your team doesn't change that) but it should serve as a reminder that this isn't a bad team. That said, they'll probably have to make some noise in the Big East this year if they want to make more than a lower tier bowl. That's especially true if the Gophers put them into a 1-3 hole.

The have a goofy mascot. They play in a dome that is not air conditioned. Their SB Nation blog, Troy Nunes Is An Absolute Magician, put together a fun #BEATGOPHERS image for this game. 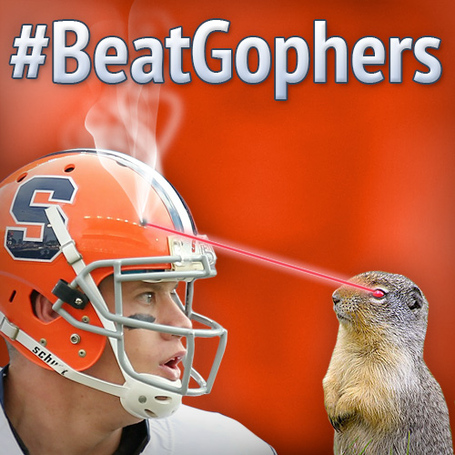 Doug Marrone is the head coach. He's in his 4th year with Syracuse and has an overall record of 18-22 (6-15). You might remember him from when the Gophers beat Cuse back in 2009. Yes, this man lost to Brewster (albeit in his first game and with that Dukie at QB). His first 3 years have been a mixed bag. He got the team to a bowl (which they won) back in 2010, but as noted last season was a disappointment. I think Cuse fans are being relatively patient with him, but I'm not totally sure on that.

Scott Schafer is the defensive coordinator. He's been with Marrone at Cuse since 2009. I don't know a lot more about the guy.

Nathanial Hackett is the offensive coordinator/QB/TE coach (that's a lot of titles). He joined the staff in 2010 as the QB/passing game/TE coach and replaced the passing game part with his OC title last year. Again, don't know much other than his offensive and QB coaching seems to be working given the offensive numbers the team is putting up.

It's good. Like, tops in the country good. Like #3 ranked passing offense in all of NCAA at 380 yrd game good. Their QB, Ryan Nassib, is the #6 passer in the country. He's completing 32 passes a game and has a 66% completion rate. So...yea, they throw the ball and they do it well. How our defense does against their passing O probably decides the game. As you'd expect given the amount of throwing they do, their run game is middling (#69 with 154 yrds per game). Total offense is also strong, coming in at #15 nationally at 533 yards per game. Scoring offense is equal to ours.

So which players should you be keeping an eye on? Obviously Nassib is the #1 guy. He'll be a great test for our defense and a quality pass rush will be a must. He's averaging a 147 in passing efficiency. So.......kinda good? Kinda good. But who is he chucking it to? RS senior Marcus Sales is his #1 go to guy. He's averaging a paltry 116 yards (#7 in the country) and 8 receptions (#8 in the country) per game. There are 2 other receivers averaging over 50 ypg receiving. In order, they are junior Jared West (70 ypg) and junior Prince Tyson-Gulley (50 ypg). Their running back is putting up only ok numbers. Junior Jerome Smith is averaging 58 ypg and 3.85 ypc.

The defense is a bit more of a mixed bag. They are the #97 rush defense, the #18 pass defense but only 97th in pass efficiency, the #55 total defense, and the #94 scoring defense. They are middling in TO's created (though they're in the top quartile in INT's with 3). This is where the Gophers need to make their mark. They must come out and move the ball against this team. Ideally, the weaker rush defense should help out as the Gophers will try to pound the rock to start the game. And as we've seen, both Northwestern and USC were able to tear up the defensive secondary too. The Gophers will be able to move the ball on this team if they are executing.

Defensive players to watch? LB Marquis Spruill leads the team with 21 tackles and TFL w/ 5. No one guy stands out on the defensive line as a sack machine or in the secondary as a ballhawk. Starting CB Brandon Reddish (who has 1 of the teams 3 INT's) may be out with an injury. He is day to day and is their best DB so his loss would be big.

Didn't have a lot of time to research ST for Syracuse. The punt/kick return units don't appear to be anything special based on the stats. On punt coverage...not so good. They are 2nd to last in net punting (have given up 177 return yard on 4 returns) and gave up a PR TD to Northwestern. Kick coverage is the exact opposite, #5 in the country. Ideally we'll see the Gophers pick up some "hidden yards" on PR from A.J. Barker.

CB Brandon Reddish: Day to day but listed as the starter

How Do The Gophers Stack Up?

That's the question, isn't it? I think our defense will perform better than expected. That's probably good because while their defense is a weak point, I'm still not sold on our offenses ability to exploit that fully. I do not see this turning into a true shootout like the Northwestern game did. Instead, I see it staying in the 20's.

Key matchups are our defensive line versus their quick passing game, our secondary versus their receivers, and our run game versus their rush defense. If we can hold them down in the passing game and hurry/hit Nassib a bit then I think we'll be ok on defense. I think it is especially important that we not let Syracuse and their passing game get off to a hot start. I don't think the Gophers win if they end up in an early hole. If we establish the run then I am confident Max Shortell will be able to find and hit open guys for bigger gains.