Share All sharing options for: Tailgate Nugz - PROTECT THE PIG

Happy HATE DAY everyone! Please make sure to stock up on HATERADE before the game today so that you can offer up the proper amount of HATE HATE HATE.

This Nugz is coming to you live from the beautiful city of Muscatine, IA. It is everything I thought it would be and more. If you're wondering what's going on around here, I provide you this graphic... 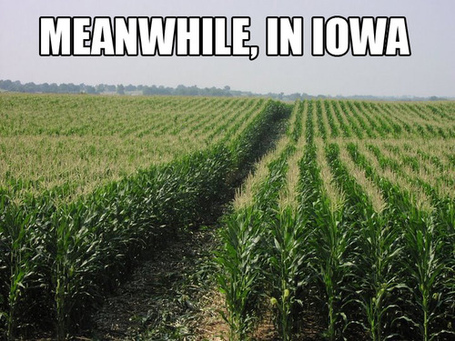 PREDICTIONS PREDICTIONS: Running through them quickly...Phil Beard says Gophers, 20-17. Randball saves me some time and collects the WWL and BTN predictions. Gophers are picked by all 4. Fuller says Gophers, 21-17. Sandell? Picks the Gophers.

- FSN gives their 5 keys to the game.

- BTN previews Gophers/Iowa and the rest of the B1G. The Gophers, and DL Wilhite specifically, get called out as bright spots for the conference.

Twice this year, Minnesota has allowed only one touchdown (beat New Hampshire 44-7 and Syracuse 17-10). The last time the Gophers had at least two games during the same year where they allowed only one touchdown or less was 2009 (Air Force, South Dakota State, Iowa). This is the first year since 2006 that Minnesota has held two of its first four opponents to 10 points or fewer.

- Crazy little known fact...today's game between Indiana and Northwestern will determine who holds the lead for the most losses in any NCAA's program history:

Both teams have 632 overall losses, as pointed out to me by commenter GTom, to whom I owe a trillion thanks. That means the loser of this week's matchup will be the new record for the the losingest squad ever.

- West Virginia has a PSA out that tries to convince their students not to burn couches. Only in West Virginia.

- Nebraska has a new original rap. It's actually pretty good.