It's already Wednesday of Week 2. College FB season is going to move too quickly and this does not make me happy. What does make me happy? Delivering you the Wednesday Nugz.

- I'm declaring today to be Derrick Wells Day. Seriously, the kid keeps getting honored with defensive POW awards. He's exactly the kind of "unheralded" player the Gophers need to keep stepping up for Kill's rebuilding plan to work as well as he hopes. Also, helmet sticker.

- Fuller talks to A.J. Barker, the junior walk-on WR whose performance last week likely resulted in a lot of "who is the guy who made yet another catch" type reactions around a sizable portion of the Gophers fanbase.

The 6-foot-1, 190-pound Barker isn't the fastest receiver on the team. He doesn't have the best hands. He's not the best route runner. But he's been good enough in all those areas to become a player whom Kill and offensive coordinator Matt Limegrover expect to be one of their top four or five receivers.

"It's really not something that was surprising to us," Limegrover said. "He's been a guy who has kind of stayed under the radar and done his thing. We have a lot of confidence in him because he knows there's not a lot of margin for error."

- Time for some Gray stories I think. Sandell points out what should be obvious (but sadly is not for too many folks)...it's not yet time to panic about Gray's performance.

Grand conclusions about Gray's long-term success or failure this season as the Gophers' top signal caller can't be drawn from Game 1. It isn't time to overly berate him for his obvious shortcomings last Thursday and begin the campaign for his successor. No one could have reasonably expected Gray, after a year wrought with constant passing woes, to be suddenly consistently on target and always in control.

But his immediate battle with keeping his mind in check was both worrisome and surprising given the clear strides he had made in the offseason and in fall camp, primarily with his accuracy.

The last part is the key for me. Worrisome and surprising. What we saw on Thursday wasn't a good thing and shouldn't be discounted out of hand. That said...

However, though the glaring accuracy problems have to be brought to the forefront, Gray provided enough positive signs in the opener to validate that the perceived improvements in camp weren't without a level of merit.

With his ground production capped at a relatively minimal 68 yards off 17 carries, he threw for 269 yards -- the second highest total of his career and the most by a Gophers quarterback in the first game of a season since 2004 -- and spread the ball around to nine different receivers.

Gray also made throws when needed in the game's crucial stretch run. Back-to-back touchdown throws to Rabe propelled the Gophers' late rally, though arguably it shouldn't have come down to that.

Given the fact that it doesn't fit in with the other recent evidence from the fall that showed improvement it's just not worth freaking out. Also, keep in mind that Sandell is offering this opinion after breaking down the game film and finding plenty of things to critique about Gray.

Plenty more Gray stories, look aheads to UNH, Iowa has a sad, and an example of when high fives go wrong can all be found below the jump...

- Fuller says it's Gray's call on when to run and Miller talks about Gray taking ownership of his overthrows. Gray says he feels the loss would have been on him if the Gophers hadn't beaten UNLV. Editors at newspapers around the country need to stop with the 50 Shades of Gray references when writing Q headlines. Seriously, just stop.

- The St. Tammany News takes a look at the play of James Gillum.

- Limgrover says that players need to have a short memory. It certainly seems like this was the case on Thursday as Kill says that unlike last year, there was never a letdown on the sidelines when the Gophers fell behind.

- The Gophers say they won't take UNH lightly. I sure hope not. Sad fact noted by FBT yesterday...it's been about a decade since the Gophers have properly and soundly beaten a FCS opponent (it's often forgotten, but Mason was struggling with FCS schools as far back as 2004).

- Speaking of UNH, Gopher Sports has their normal "5 Things" Preview of week 2. The Manchester Union-Leader takes a look at this Saturday's game.

- FBT offers up his predictions for UNH based on his statsy models as well as what alcohol the game reminds him of.

- Here's a sneak peak at the cover of the UNH gameday program: 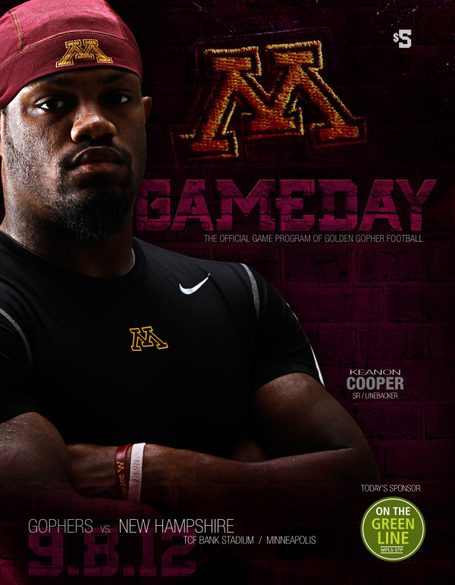 - Yesterday was Coach Kill's presser. He covered a variety of topics, but I want to focus in on my favorite part:

Friday, got to speak to every student on campus at orientation. And again, I haven't been here that long; been here one year, but it was a much bigger crowd than it was last year when I talked to that group of people and they were very enthusiastic. And I told them some very enthusiastic information that probably would get me in trouble if I told you what I said in here, but I told them to have a good time, so to speak, and we need to be user friendly and we need to be accommodating. And you figure that out.

Emphasis is mine. Unlike Mason, Kill prefers his student section to come buzzed and ready to go. Video of the presser here (jump to about the 18:40 mark for the section around my fave quote). FBT's much more in depth preview here.

- Gopher Gridiron and Gopher Sports put up some great videos from Thursday's game. 1) Pregame speech by Kill. 2) Pregame in the tunnel & on the field. 3) Highlights (sorry MR, they're mostly field level). 4) Postgame interview with Kill. 5) Postgame interviews with Gray and Wettstein. 6) Postgame locker room celebration and speech. The last one is my fave so I'm embedding it:

- FBT offers up a really nice and in-depth film breakdown from the UNLV game. He also Rouses the Rouser with some post UNLV thoughts.

- It's time for a local scribe to talk about how this upcoming game is important to the Gophers hopes of keeping the fanbase energized. This time it's Tom Powers copying and pasting in what is essentially a Reusse bit. As always theses stories are nice because they allow the writer a nice "I told you so" if the Gophers lose while also leaving plenty of room for "that wasn't good enough" or "it's only New Hampshire" if the Gophers win.

- Keeping with the PiPress columnists, Shooter has Gopher nuggets. Most important? What beer will be on tap at TCF:

Grain Belt, Summit and Coors Light will be among brands available.

- Nadine Babu (aka GopherLady over at Gopher Hole) got together with a local company and will be providing students a place to tailgate (and a ton of tailgating perks) in the Ski-U-Mah lot before upcoming home games. It's nice to see someone take a proactive step to attempt to deal with the gameday atmosphere problem.

- The Marching Band led the freshman in an orientation session about Gopher football traditions, cheers, etc. This is the event where Kill told them to "have some fun" before games. You've probably seen one of these photos before, but to me they never get old: 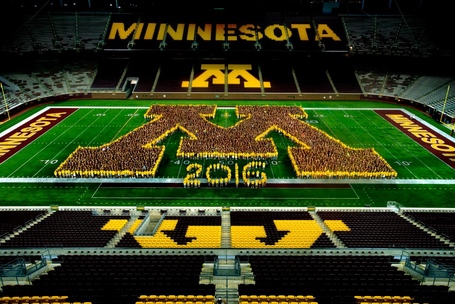 - It sounds like freshman Aussie punter Christian Eldred made the best impression last week. It also turns out that the starting punter wasn't selected until during warmups before UNLV.

- Kill also admitted that UNLV broke out an offense that the Gophers hadn't seen on film. He was pleased with how the team adjusted.

- Ticket prices were announced for the Gophers game vs. Wisconsin at Soldier Field. Ticket prices range from $15 - $85 and entitle you to see both the noon Notre Dame/Miami game as well as the 3:30 Gophers/Wisconsin game. Seating chart: 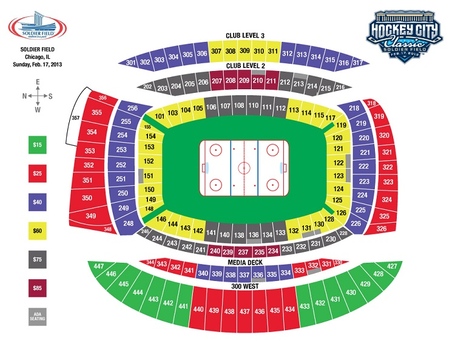 - Rose Bowl tickets can now be purchased with a similar system that was just launched for the B1G Title Game. Sadly, not something to worry about right now.

- Time to point and laugh at Iowa's empty trophy case:

"It definitely hurts to see all the empty trophy cases that we have," Davis said.

So...here's how I feel about that: 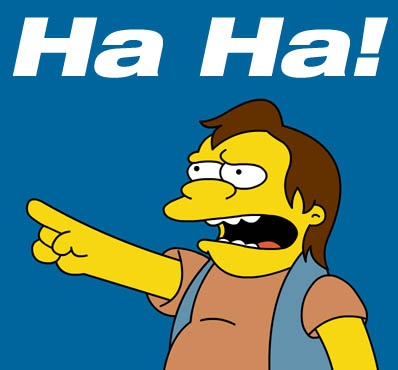 - A DIII QB set the single game passing yards record for all NCAA divisions last weekend. He broke the record while throwing a TD. Fitting.

- Georgia Tech its putting the honeycomb everywhere it seems.

- Michigan's uniforms keep getting more and more highligher-ish. My eyes, the goggles do nothing!

- FSU is getting some sweet new gloves and shoes.

- Your #EPICFAIL GIF of the day: