Golden Gophers Dominate New Hampshire...Like They Were Supposed To

Share All sharing options for: Golden Gophers Dominate New Hampshire...Like They Were Supposed To

For those of you who have experienced long-term memory loss or are not old enough to remember, this is what you are supposed to do to FCS teams. The Gophers played like a Big Ten should play against even a good FCS team like New Hampshire.

The first half was a series of big plays for the Gophers en route to a 30-7 halftime lead.

Near the end of the first quarter New Hampshire finally put together a drive where they put the Gopher defense on their heels to get themselves back into the game. An eight play drive covering 76 yards resulted in a Chris Setian touchdown for the Wildcats. But that was as close as UNH would get. 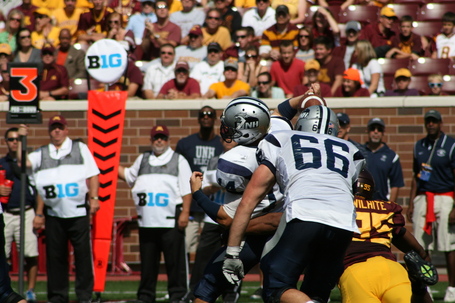 The second half opened with a long, time consuming drive by the Gophers to essentially kill the will New Hampshire. 16 plays, 85 yards and 8:16 taken off the clock. Donnell Kirkwood finished if off with a 2-yard rush. 37-7 Minnesota. And from that point on it was pretty much running time. The second string defense, Max Shortell and many other second string guys played the entire fourth quarter. Logan Hutton, Victor Keise and Ryan Grant sightings were observed in the fourth quarter. It has been a long time since we have been able to sub-down and get some live snaps for those who don't typically get to play.

Game balls should go to a number of guys.

I wasn't too thrilled with the running game. Gray was great but Kirkwood and Gillum combined for 22 carries and 77 yards. i was expecting more. But I'm really searching for things to nitpick about now.

This game was never in doubt and we should be yawning at this result. This is what should be expected. Sadly this has not been the case over the last several seasons. I'm not willing to look at this win as a statement that the program is "back". This was a nice win, we did what we should have done and we need to continue to get better. Western Michigan will be a much bigger test. Great win, we have a three-game winning streak, a beautiful day and we played much better today than we did last week.