Q: Two UND hockey players are in a car. Who's driving?

Also, I'm required by state law to post this during WHIOUX HATE WEEK...not like I needed to be told that.

Hooray for goons! But before we start looking ahead to our friends from the plains, let's look back at the Indiana game and other assorted basketball links.

- ALL THE RECAPS: STrib, Daily, PiPress, FSN, AP. My two cents? That first half made me want to gouge my eyes out. Granted, Indiana was playing at about as high a level as you could expect. But we were shooting ourselves in the foot constantly. I loved how the team came out to start the second half, but I never thought they'd get it so close by the end. You spot a team like Indiana a 23 point halftime lead and well...let's just say the astonishment and excitement level in my house was high at the end. It's hard to believe a game like that can make us think good things, but this isn't the normal Gophers team we're accustomed to.

- Amelia had some postgame notes. Her thoughts on the refs:

Yes, there were a lot of whistles tonight – and most of them went against the Gophers. Referees are human, and so of course mistakes happen. Generally, though, things even out over the long run, and a single call – or even a string of bad calls – is rarely a major reason for any win or loss. That said, Indiana got a strikingly greater number of opportunities on Saturday, getting to the line 40 times to the Gophers’ 15. In fact, Indiana star center Cody Zeller didn’t even have a single foul on him until 32 seconds before the game ended. The discrepancy had Twitter abuzz, with many viewing some of those as ticky-tack and interrupting of otherwise good play. Still, there were whistles on both sides that could have been blown that weren’t. "They had a little home cooking but it was alright," Andre Hollins said. "We fought back."

My thoughts? Yes, the refs were brutal at times (Zeller's magic anti-foul shield comes to mind). But it's a road game in the B1G. That's going to happen A LOT of the time. You can't shoot yourself in the foot like the Gophers did on the road. Period. The refs aren't the reason the Gophers lost. Also, the disparity in foul shots also has to take into account the fact that the Gophers were fouling Indiana at the end to put them on the line.

- Andre Hollins is ready to take on Trey Burke.

But is winning the Cup a good thing, or an expender of so much regular season energy that there's nothing left in the collective tank come March?

That's an argument that can be made, as the last time a team won the trophy outright and captured the NCAA title in the same season was more than two decades ago.

Frankly, I think this is silly. The WCHA is a tough league, no one disputes that. But great teams should be able to accomplish both a conference title and an NCAA championship. To me, the lack of a WCHA champion/NCAA champion in recent years speaks more to the randomness that is part of a 1 and done tourney format than a sign of the WCHA teams being "worn down."

- Don Lucia wants Sam Warning to take more shots. This article was from before the UAA series, but Don's postgame comments on Saturday night make it clear that he's still looking for Sam to step up the scoring (even as he acknowledges the great job he's doing getting other guys the puck).

- The Gophers remain 4th in the Pairwise coming into this weekend. UND is tied for 6th.

- Michael Carter was named to the CNNSI All Bowl Team.

- The Gophers swept UND this past weekend.

- They've now won 30 straight. And that's not the only record they're setting:

The Gophers women's hockey team is rewriting the NCAA record book (all streaks are ongoing):

- Jim Delaney is a huge tease.

McMurphy spoke to league commissioner Jim Delany, who said changing the division names is an option when Maryland and Rutgers join the conference for the 2014 season.

I'll believe it when it happens.

- CHN offers up their WCHA All-First Half Team. Gopher hightlights? Schmidt on 1st team, Haula on 2nd, and Reilly and Wilcox on Rookie.

- NC State fan in a wheelchair led the court rushing following the win over Duke. After almost getting trampled, he was picked up and carried by an NC State player during the celebration. The kid seems to have a true collegiate mentality about the decision:

"It was the dumbest thing I've done in college but it was awesome," Privette told USA Today.

Yep, that sounds like how I approached a lot of stuff in college.

- Syracuse has a recurring issue with their star players and...well...doing schoolwork.

- Speedos are not nearly as distracting as you'd think apparently. 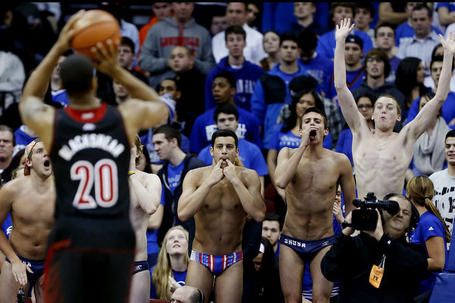 - Bob Knight doesn't know what a shot clock is. Seriously.

I'm a little worried for the guy's well-being to be honest.

- Forgot to post this when it was fresh, but a lone Florida player showed off true school spirit and pride following the Sugar Bowl while the rest of his team decided to skip out on the traditional post-game signing of the fight song:

At the end of Florida victories, the team usually sticks around to sing the alma mater with the band.

But after Wednesday’s embarrassing 33-23 loss to Louisville in the Sugar Bowl, most Florida players couldn’t get off the field fast enough while others went to find their friends and family in the stands.

But one player stayed to sing his last fight song of the season.

Junior linebacker Darrin Kitchens ran over to the band section, held his helmet high and proudly sang the fight song. It didn’t matter that he was the only one standing alone while his other teammates ignored his gesture.

According to the participation report, Kitchens never played in the game. Yet he seemed to savor this final moment and I'm sure the band appreciated his participation.

Hats off to that kid. 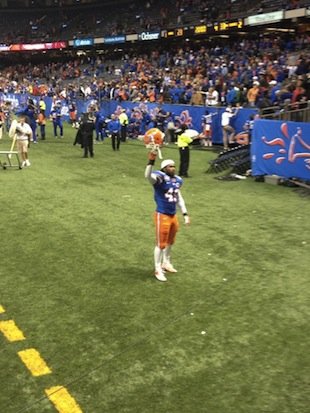 - Youth league game highlights FTW...a no look over the head heave from deep? Sure, that'll work.

- Just going to leave this here: