Whioux Hates UND? This Minnesota Gophers Fan Does (And With Gusto Too).

Here's a small list of reasons why I hate The Fighting Whioux.

Share All sharing options for: Whioux Hates UND? This Minnesota Gophers Fan Does (And With Gusto Too).

I didn't grow up hating UND. If anything, I grew up hating hockey in general. Well, that's not right. It would be more accurate to say that I grew up largely ambivalent about hockey, went through my hockey puberty as ambivalent with flashes of annoyance, and matured into a full fledged Gopher puck fan.

It wasn't like I wasn't exposed to hockey. I mean, I grew up in northern Minnesota playing basement and street hockey with my best friend (who played in the WCHA and was drafted). He was a true puckhead. He tried to get me into the sport, the REAL sport (not the fake kind I playing with tennis shoes and tennis balls). But it never took. I couldn't skate very well. I was a basketball player you see. And on the pro/college level, MN hockey never had an ounce of my attention. By the time I reached high school (the "flashes of annoyance" stage), hockey was something that interfered with the pep band being at every one of our home games (had to be fair and support both sports...lame). Things changed once I got to college, but only somewhat. I still didn't care about the details of hockey. I supported the Gophers because they were my fave school, but I (sadly) didn't get the true joy of hating UND or the full awesomeness of the back to back national titles the way I would now (though to my credit as a fan, I did sit up at odd hours in the computer lab of my residence in London, drinking beer and "watching" both '03 Frozen Four wins on the almost-live gamecast statsheet). That remaining distance from the program wasn't all bad. The Holy Cross loss hit me as more of a "WTF?" moment than a true gut shot for instance. My full conversion happened once I saw my first game in Mariucci a few seasons ago. It didn't matter that it was Michigan Tech or that it was at the tail end of another lost season. What little ambivalence remained was gone; replaced by a deeper love of the Gophers and a deep hatred of UND.

I may be newer to Gopher hockey superfandom and thus, newer to the heavy hatred of UND. But let me tell you, the hating on UND part of my journey has been all too easy. Here's a few reasons why:

1) The arrogance and ceaseless trolling Whioux fans bring to any discussion, especially those involving the Gophers.

I know we can all find easy examples of this, so I'm going to stop with the most recent Whioux fan nonsense that has irked me. I'm speaking of this silly UND argument...

THE GOOFERS ARE TOO SCARED TO PLAY US ONCE THEY LEAVE THE WCHA!

Ah yes. The old "the Gophers are ducking us" claim. Basically this silly bit of whining is predicated on 2 beliefs. First, that the Gophers are scared of UND because they're good and second, that it would have been easy for the U to hold open spots for UND in the upcoming non-conference schedules.

We'll take a look at the latter assertion first. What UND fans do not seem to grasp is that the U did hold spots open. The U was ready to finish the schedules once the nickname controversy was done. And then the brain herpes addled part of the Whioux fanbase dragged out the nickname mess far beyond its expiration date with lawsuits, legislative action, and an attempted constitutional amendment. However you feel about the NCAA's decision on the nickname the situation was actually very simple...without both the leadership of both Sioux tribes being on board you weren't going to be the Sioux anymore. How long it took to start the process was up to Sioux backers. And they chose to fight it out until the bitter end. Meanwhile, the U can't play non-con games against teams with unapproved Indian nicknames. Again, you can feel how you want about that but the fact is that's the U's stance. And it wasn't changing. So what was the U supposed to do? They had these open spots but the Whioux backers were dragging things out. Lucia wants to lock up some quality non-con opponents and stop waiting around. So they go out and add games with BC and Notre Dame (and Northeastern, but I'm not a Whioux fan and thus logic prevents me from calling them a powerhouse). In other words, if Whioux backers had read the writing on the wall and stopped fighting a losing battle they'd be on our non-conference schedules for the 2013-2015 seasons.

This is the point where the Whioux fans usually point to Wisconsin and whine "BUT THEY'RE HOLDING OPEN SPOTS FOR US!" Here's the thing Whioux...We're not Wisconsin. The Gophers have 4 in-state programs that they have to play every season. We do that because A) State of Hockey, duh and B) several of those programs depend on playing Minnesota on their ice for revenue. Yep, the Gophers help keep other programs afloat. The Gophers also host the Mariucci Classic. UW has no tourney. That means UW has 10 more games open in every non-con schedule to reserve for the logic deficient fans from Grand Forks.

And this is the point where Whioux fans ignore the NCAA mandate for a maximum of 32 games. The Gophers have 20 games in their B1G conference season, 8 against MN teams in the non-con, and 2 in the Mariucci Classic. That leaves 2 games. I guess UND fans failed elementary school math because last time I checked, 12 open non-con games (the number of non-B1G games UW has to play with) is 10 more games (READ: A LOT MORE) than the 2 games Minnesota has to play with. What that means is that UW had leeway to wait for you to stop fapping over a nickname. Minnesota meanwhile wanted to finish the schedules with quality teams. That could have been you UND, but your massive hard-on for picking losing fights with the NCAA left you out in the cold. You have only yourself to blame.

Which brings us to the "ducking" and "scared" parts of the argument. We signed up for games with BC and Notre Dame. Remind me again, BC is kind of good right? And those games against Notre Dame, they've not been pushovers either? Well then, we're certainly afraid to play good teams. Very fearful of us.

Ok, I can't get away from the Whioux fan part of my hate just yet.

I'm Facebook friends with plenty of folks from high school. We're not real life friends, and we rarely interact on FB, but I'm a nice guy and didn't feel like turning down their friend requests. I'm sure some of you have a similar section of your FB friends list. Growing up in Detroit Lakes, I have numerous high school classmates who went to NDSU, Concordia, or MSU-Moorhead. A few went to UND, but not many. I don't mind the UND alums being Whioux fans, that's expected and good for them. It's the stuff I see from a number of the F-M school kids. Far too many of them post adoring Whioux fan things on their FB feeds. Now, that's ok if you're a Concordia kid, you're D-3. You can give it to MSU-M alums too since they don't play UND anymore really. But the fun part is that these UND "fans" are also Bison football fans. I'd say they were the lowest of the low in sports fandom, but for the NDSU grads on my FB wall who root for Whioux hockey. Your largest historic rival, an in-state rival to boot, and you are cheering for them? It's like watching people change their Notre Dame jacket out for an IU basketball jersey in the winter.

UND equals goons. It's very simple. Heck, one of the most unabashed UND homer blogs out there is called UND Goon. They embrace it. Which is understandable (to a point). Goons can be fun. See: the recent Sean William Scott movie "Goon" as an example. (ED NOTE: No seriously, watch it. It's a totally underrated flick. You think you're getting Stiffler on skates and it is WAY better than that.) I do get it. Hockey fights are fun to watch. But at some point you have to have the self awareness to realize that your program is the equivalent of a guy farting on the elevator. Sure, it's a funny gag that'll get laughs from folks watching a sitcom. But people don't want to see it all the time because in the end it's a cheap gag that gets tired. But the Whioux haven't grasped this because every season they're back, farting on the elevator, waiting for the laugh.

And Whioux fans? I guess supporting your team despite the goonery is admirable in a way too. I mean, I'm glad to see that they've found a way to keep on supporting a behavior that most fans prefer to shun and avoid. You know, like they do when it comes to hooking up with people who have herpes. But not you Whioux fans. You know that even hockey programs with herpes deserve your sweet loving. That's a scary thought until you realize that the Whioux are supported by fans who seem like they'd have real herpes.

Anyway, the goons. Let's run down a recent list of UND goontasticness. Lets start with the current squad first. In fact, let's look at Mama Fratelli himself, head coach Dave Hakstol. You flicked off a referee in a game where your team racked up 17 penalties for 91 minutes. I mean, really? Who the f*** does that? Your goon squad is racking up 91 minutes and you think the right move is to GIVE THE REF THE BIRD? Do you have brain herpes? 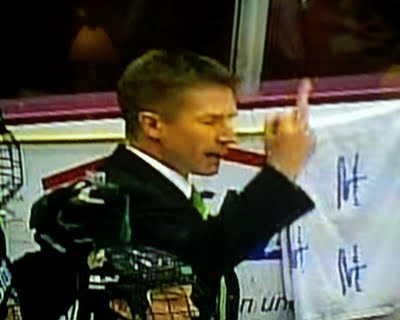 Then there is Francis Fratelli, our dear friend Andrew MacWilliam. He of the 23 penalties for 57 minutes over 21 games. Quality goon work there son. Canadian herpes I see.

And let us not forget Jake Fratelli, er, Danny Kristo. He of the fantastic anger management skills:

Yes, there is nothing goon-ish about that.

That takes care of the Fratelli's, but let us not forget 2 of the greatest UND goon moments vs. Minnesota from the YouTube era.

- UND ends their 97 penalty minute show by starting fights after the final whistle in 2008:

This second clip includes some of the cheap stuff that UND was pulling to earn the 97 minutes:

- Ben Blood, gooniest of the recent goons, goes after Rau in the handshake line.

So troll and goon on Whioux. Enjoy watching games in "The House That A Nazi Sympathizer Built." Enjoy your new conference, you know, the one that the X considers to be its second choice for conference tournaments (enjoy the Target Center!). But most of all, enjoy your herpes, be they metaphorical or real.