Gopher Basketball is Winning AND Losing the Possession Game

Share All sharing options for: Gopher Basketball is Winning AND Losing the Possession Game

In the game of basketball there are a myriad of varying styles and strategies on either end of the floor that have all had success over time. Some styles are more aesthetic and pleasing, some are more exciting while others may only be viewed as beautiful to a small subset of fans or basketball purists. But style is immaterial, what matters is how you execute them and essentially how efficient you are with each possession. Basketball is a game of accumulated possessions that flow from one to team the other without stopping.

Possessions are rather simple to estimate by simply looking at the box score and calculating with the following formula. Every time you have the ball you will either take a shot (FGA), turn the ball over (TOs) or get fouled. To get a possession total for a particular game the formula is this...

In this formula, primarily used to calculate possessions to be used for efficiency stats, offensive rebounds are viewed as an extension of the current possession not a new one entirely. Also note that free throws are taken times 0.475 because a two shot free throw (or three or a FT following a made basket) should not count as 2 possessions. Research shows that this is about the rate at which you should use to estimate a possession.

Now let's bring the Gophers into this conversation. Minnesota is unique this year in that they are dominating the college basketball universe in offensive rebounds giving themselves extended possessions and more opportunities for shots which equals more opportunities for points. Currently they get back 48% of their own missed field goal attempts. Over the course of a game this should give them an incredible advantage over their opponent. While they are not technically extra possessions they are certainly extra opportunities to score points.

The problem is the Gophers are nearly equally as bad at giving away possessions and opportunities. Nearly 22% of our possessions end in a turnover. The worst of all ended possessions... a turnover is an ended possession without even giving yourself the opportunity to score. Turnovers are one of the sins in basketball that will get you to the bench faster than anything else (except maybe when I used to shoot threes and my coach would bench me for shooting outside of the lane, but that's another story).

Considering the Gophers are so good at giving themselves extra opportunities on the offensive end, I could maybe live with the high turnover percentage; maybe they cancel each other out. But unfortunately the Gophers are not so good at ending opponent possessions with a defensive rebound either. This team currently ranks 284th in the nation allowing opponents to gain extra shot opportunities by rebounding 35% of their misses. That number is slightly better in conference play but not significant enough to believe that we are trending towards the positive.

Lastly, if we are going to look at how much we turn the ball over it is only fair to look at how many turnovers our opponents have. Currently we force a turnover on 22.7% of our opponent's possessions, a solid number that ranks 71st nationally. Do our turnovers equal what we are generate? Not really.

Put all of this together and we have a simple little formula. Sort of a very simple Opportunity +/- stat.

Seems strange right? Negative numbers in wins over Michigan State and Illinois? Nearly even in our losses to Indiana and Michigan? In fact looking at other games Duke was +6, Memphis -8 and Stanford -2. Maybe this homemade stat isn't very useful.

But I still think it is valuable when you look at things more closely. Looking cumulatively at just rebounding and opportunities gained or lost in Big Ten games only, the Gophers are fairing well.

That is an advantage. But now look at turnovers.

Any opportunity advantage from rebounding has been negated and them some.

As the title states, we are clearly winning the possession battle and losing it at the same time. Our offensive rebounding advantage is significant and when you look at it on a percentage level, it is really an impressive number. Worthy of being praised on every telecast. But offensive turnovers, along with the lack of generating more turnovers and poor defensive rebounding is what will hold this team back.

We are a rather efficient team on offense and on defense. We score 1.186 points for every possession (calculated as it was above), even if that number is inflated by extending nearly half of our initial possessions with an offensive rebound. Defensively we hold teams to 0.881 points per possession, a figure good enough to be ranked 27th nationally. But we are giving away more opportunities to opponents without even giving ourselves a chance to score with a field goal attempt.

Clearly these numbers are just a piece of the puzzle. Making your shots, getting to free throw line and defending in a way that makes things difficult on your opponent are major factors in determining outcome of a game. The Gopher win over Illinois is a great example. Illinois gave themselves 14 extra opportunities but shooting 35% when the Gophers shoot 53% isn't going to allow to win very many games. You'll need another dozen extra opportunities at that rate.

But looking at the teams atop the Big Ten standings you can see that doing well, even just marginally well, allows you to win a lot of basketball games.

Or perhaps this is a better graphical representation. 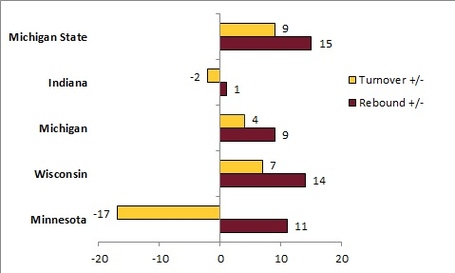 We cannot be content having an historically good advantage rebounding our own misses, it doesn't matter if we keep turning it over and not grabbing defensive rebounds. Just limit the possessions we give away, just a little bit, and this team becomes a much more dangerous team. Right now the one thing keeping us from the top echelon of the conference is our own desire to give away possessions without getting an opportunity to score.

The answer is never as easy as identifying the problems, I'll save that for the comment section or maybe another post. Part of the turnover problem is due to our desire to push the ball, style and strategy. Increased speed will result in more mistakes, but too often the turnovers are just careless. This Gopher squad is capable of accomplishing big things, but these in-possession opportunities need to be fixed.