Time to learn more about the other MSU. 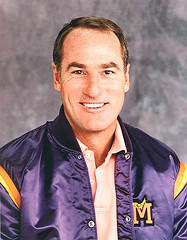 ***This is so obviously not true that I can't believe I'm pointing it out. Obviously I wrote the questions and was out of creative ideas for how to title the Q&A that I fell back on the made up connection between Coach and the real MSU. Just be happy that I didn't use a Manti T'eo reference (saved that for the Badger Q&A).

Hayden Fox of The Daily Gopher: Coming into the weekend the Mavericks are tied with Duluth for 6th in the WCHA. What are your thoughts on the season thus far? In your mind are the Mavericks behind, meeting, or beating preseason expectations? How do you see the season playing out for MSU?

Dan Myers: Well, I picked the Mavericks to finish seventh on my preseason media ballot, so they're sitting right around where I thought they'd be. Of course, I was bullish on the Mavericks, probably more so than most of my media colleagues. What has surprised me is how the Mavericks have gotten to where they are. After an abysmal start (1-5-0) over their first six league games, the Mavs have rallied, losing only three conference games since. And two of those came in overtime a couple of weeks ago against Wisconsin. Five of their eight losses have been one-goal losses and they very easily could have won three or four of those games. This definitely is the best MSU team in a decade, and much of that is because of two people: new coach Mike Hastings and freshman goaltender Stephon Williams.

Chris Dilks: Coming into the season, I think Minnesota State was a trendy pick around the league to be in contention for home ice in the playoffs, but it's difficult to say you "expect" a team to be that good after they've struggled so much the past few years. There's a lot riding on their last 10+ games of the season that are ultimately going to determine how their fans end up viewing this season, but so far, I think their fans have to be thrilled to be playing games that have a lot of meaning both in the upper half of the WCHA standings, and in terms of the NCAA tournament field in late January.

HFoTDG: I'm the less knowledgeable hockey fan among the TDG writing staff so my knowledge of personnel on the other conference teams is rather weak. In your mind, who should I be keeping an eye on this weekend?

DM: I'm very excited to see the battle of the goaltenders this weekend. Adam Wilcox and Stephon Williams may be the two best goalies in the league so far this season, so that will be intriguing for me. From an MSU perspective, keep your eyes on Eriah Hayes. He's big, strong, quick and athletic. He's also one of the nation's top power play goal-scoring threats, so if he's putting the puck in the net, it probably means the Mavs are winning the special teams battle. Jean-Paul Lafontaine and Matt Leitner are both gifted playmakers and Zach Palmquist is one of the best defensemen in the WCHA nobody talks about.

CD: The Mavericks are pretty balanced offensively, but are led by Matt Leitner, who is tied for 10th nationally with 29 points(along with Minnesota leading scorer Erik Haula). He's on pace to be the first Maverick to average over a point per game in six years. Big forward Eriah Hayes gives them a nice presence in front of the net and is second nationally with seven power play goals.

HFoTDG: How do you feel about the demise of the current WCHA? How do you think the new WCHA will fare moving forward?

DM: I'm pretty outspoken on this topic because I feel the demise is unnecessary. If you maintain a WCHA without Minnesota and Wisconsin but add a Miami and perhaps a Notre Dame or a Western Michigan, that's still a really, really good league. Unfortunately, the NCHC schools have decided to break away and form their own conference, based almost 100 percent on "competitiveness," instead of other important things like location and tradition. I think those schools will quickly realize that someone in that "super-conference" has to finish last every season, and if it's a team like St. Cloud State or Minnesota-Duluth, schools that would not be in that situation in a revamped WCHA, they may see the grass isn't always greener. It's my belief, and will be until someone proves me otherwise, this league was created solely out of contempt for WCHA commissioner Bruce McLeod and officiating boss Greg Shepherd.

Going forward, I think the league is beneficial for teams like Minnesota State and Bemidji State because they will still get games against Minnesota AND they'll be able to compete for conference championships year in and year out. I think the league will hurt the Michigan teams and I think, eventually, it will kill the Alaska programs. But that's just my opinion.

CD: I think just about everybody is disappointed to see the WCHA in its current form dissolving, especially as we get into the stretch run of the season, and it looks like we're going to have a fantastic finish. From a Minnesota State perspective, I don't think anyone blames Minnesota and Wisconsin since they had no choice in the matter. But it's a shame to see college hockey losing so much of what makes it special, and not gaining much in return. As for the new look WCHA, they should be fine from a competitive standpoint. Conference affiliation hasn't had any real effect on any team's recruiting, at least in the short term. The real concern will be handling things financially. Both the WCHA and CCHA in their current forms said they could not handle both Alaska schools or Alabama-Huntsville in their conference, and now the smallest programs in the west are being asked to find a way to make both of those work.

HFoTDG: I'm glad that Minnesota has kept a yearly series with the Minnesota schools. As time passes, what do you think the ideal format for these series should be?

DM: With an odd number of schools, I think the format is as perfect as it's going to get. Four teams in the 'Minnesota Cup,' Gophers always in, other teams rotate out, but the team that's out gets to host the Gophers for a two-game series in their barn. Bemidji is out of that tournament next year, but hosting Minnesota for two at the Sanford Center is a HUGE benefit for that program. Say what you want about how Don Lucia has handled the North Dakota scheduling mess, but you have to give him massive amounts of credit for what he's done for the smaller state schools by taking care of the teams here in Minnesota. He has definitely followed in the footsteps of Herb Brooks when it comes to being a tremendous advocate for, not only his own program, but the other Division I programs in the state.

CD: First off, I was really impressed to see what Minnesota's non-conference schedule looked like next year, playing all four of the schools in the state, and then the Minnesota tourney on top of that. I ripped into Don Lucia about four years ago about not doing his part to support the growth of hockey in the state after some comments he made, but if Minnesota maintains a schedule like that, he deserves a ton of credit for it. If I had to nitpick, rather than one road series for Minnesota and three homes series, I'd like to see one of those home series become a home-and-home with Minnesota hosting Friday and traveling Saturday.

HFoTDG: Looking back to this weekend, what do you think the Mavericks need to do in order to beat the Gophers?

DM: Two things will be key for Minnesota State if they want to have success this weekend: Stephon Williams needs to be the best player on the ice and the Mavericks will need to keep it even 5-on-5. When these teams met back in October, the Gophers won a 3-2 game at Mariucci by scoring three power play goals. That won't happen again. MSU is a much more disciplined team than they were then and their special teams on both sides are among the best the WCHA. In fact, since that game in Minneapolis, MSU has allowed just five power play goals in 19 games and just one since mid-December. If MSU can keep it even at full strength, they may have a chance to take this series with a timely power play goal or two.

CD: Being ready to take advantage of a potential Minnesota letdown after that emotional series against North Dakota last weekend is a big key. Minnesota is a better team when they can play with a lead and really get rolling, and the more Minnesota State can keep the crowd out of the game on Friday, the better for them. The other big key for them will be taking advantage of their power plays. Minnesota State's defense might have a tough time matching up against the Gophers skill and speed up front, so they're going to need those goals from their special teams.

HFoTDG: Predictions for Friday and Saturday?

CD: I'll say a split, just like last time they met, but with each team winning on the road this time.

Thanks to both Chris and Dan for putting up with Hayden and his last minute e-mailing of the questions thanks to some incompetence by both Luther and Dauber.

Be sure to stop back tonight for the Hockey Open Thread and make sure to read Jeffrick's Mankato Preview if you haven't already.