The statement win over MSU sells the national media on this year's team, a Haula injury update, Jadeveon Clowney goes Mortal Combat on Michigan, plus way too many GIFs.

- Luke Winn has the Gophers #7 in his latest Power Rankings.

- The latest edition of the "aMAILia Bag". Amelia also blog about the 3 big takeaways from the Gophers' win over MSU.

- ESPN's Jason King calls Trevor Mbakwe the B1G's X-factor and says that Minnesota is the team with the best chance to challenge Indiana.

- In case you missed it, Trevor shed his knee brace for the game versus MSU.

- A Gopher fan and Gopher Hole poster "Gopher6" took advantage of MSU's "Rock" and their Spartan statue to celebrate the Gopher's big win over the Spartans: - In a move that should surprise no one, the Gophers men are now ranked #1 in both major polls following their blowout win over Boston College. That means both U hockey teams hold the top rank. 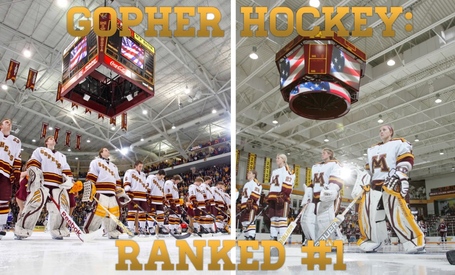 - Coach Lucia said that the team is hopeful that center Eric Haula will only be out 1-2 weeks and that he'll be back in time for the UND series. Roman notes that losing the Finn for any period of time will hurt. Russo has been hearing that it's a potential fracture in one of his fingers.

- MarQueis Gray has been invited to the NFL Combine.

- The WWL Blog has their Season Report Card for the Gophers. The also have the Best and Worst from the Gophers' season. And Michael Carter got a bowl Helmet Sticker.

- In case you missed it, here's the great Yahoo Sports story on Coach Kill and his epilepsy.

- The football complex continues to get facelifts: - The Gophers took 4th in the Southern Scuffle, behind PSU, Okie State, and Missouri.

- If you weren't watching the Michigan bowl game then you missed the nastiest CFB I've ever seen. Jadveon Clowney is a beast.

- LSUFreak delivers a quality GIF interpretation of the event.

- Wisconsin fans didn't care for the Stanford Band making fun of cheese during their halftime show. They went to Twitter to prove it and the results were...quality.

And for those who were not aware, the Stanford band is weird.

- Everything you never wanted to know about the new lawsuit against the NCAA by the State of Pennsylvania.

Referees allowed Marquette and UConn to face the wrong baskets for the opening tipoff of overtime, which resulted in Shabazz Napier attempting a layup on the incorrect goal and Golden Eagles defender Jamil Wilson goaltending in an effort to block it. Only after the possession was over did the referees realize their mistake, stop play and confer for several minutes in an effort to figure out how to handle the unusual situation.

What they decided was to wipe out the two points UConn would have received because it's not possible to goaltend on your own basket and to award the ball to Marquette since the possession arrow favored the Golden Eagles. Based on a close examination of the NCAA rulebook, however, that wasn't the appropriate ruling.

- The Texas A&M police escorts have new uni's for the Cotton Bowl. - Guy surprises his Bama fan father with tickets to the MNC game.

- A collection of the best Sports Illustrated "Signs of the Apocalypse" from the past 20 years.

- Lane Kiffin in a sombrero. Yes, he is a tool. 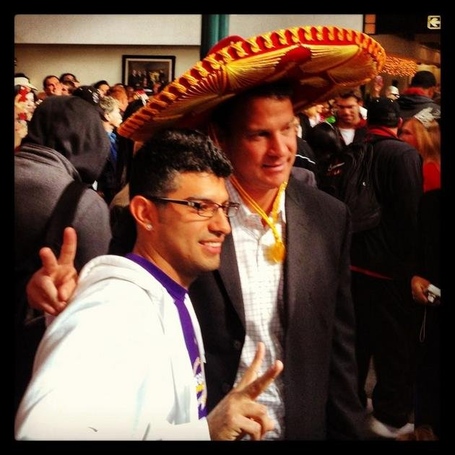 - Mike Leach is co-authoring a book on the famous Apache warrior Geronimo.

- Some of the best GIFs from the CFB season:

- AND LAST BUT NOT LEAST: