Here's why you should be in Ridder tonight.

Share All sharing options for: Minnesota Women's Hockey - 5 Reasons You Should Be At Tonight's Home Opener

The Minnesota Women's Hockey team also has their home opener at Ridder this evening, with the puck drop scheduled for 6:07pm. The back to back national champs deserve a great home crowd. If you're not already planning on being there, here are 5 reasons why you have to go:

Back to back Natty Champs. 51 straight victories. And you have the chance to sing The Rouser when last year's squad is honored with another title banner in Ridder. Per GopherSports, fans should be in their seats at 5:45pm to make sure you don't miss the banner.

That's right, the Gopher women have their home opener against the vile red menace from Madison. They're good too, ranked #4 in the country. I mean, what else needs to be said here? 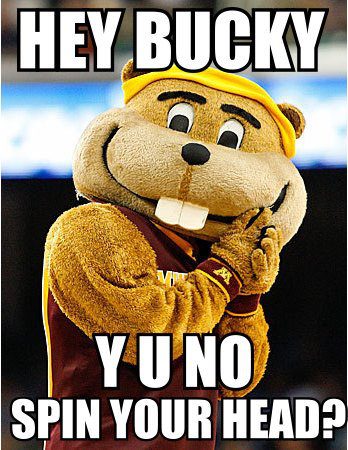 That's a steal! Great hockey, the chance to hate on Wisconsin, and it's free? Did I mention they're giving out free stuff too?

The first 200 students at Ridder Arena will receive a free shirt...Maroon Madness is a special invitation to all Gopher student-athletes to support Gopher women's hockey. Pizza will be available.

WHY ARE YOU NOT THERE ALREADY?

Seriously, it's kind of a big deal and if the home opener had an apartment it would smell of rich mahogany. It means you can be among the first to see the great new entrance video in person:

- National Title banner is going up.

- Matchup between two excellent teams that will lead to some great hockey.

- The home opener is very important, much like Ron Burgundy.

Time to pack Ridder. Let's get it done Gopher fans!