Because we need more positivity today.

Welcome to my first TDG #TEAMSUNSHINE piece. What is a #TEAMSUNSHINE story? This is a post that will be wholly devoted to a positive from the Gopher sports world. Why? Because sometimes you just need to say how awesome something is, ESPECIALLY when you're a fan in the midst of a stretch with a lot of rough news. I totally meant to run this last week, but Job A required that I change plans. Such is life, it is what it is, additional saying noting that the real word can suck inserted here.

Anyway, it's been a relatively rough stretch over the past 17 days if you're a Gopher fan. There was the stinker against Iowa, Coach Kill's seizure preventing him from coaching at Michigan, the underwhelming Michigan performance, and the news that Coach Kill is taking a leave to focus on epilepsy treatment. Actually, the last one is good news of a sort, but it's still a drag for everyone who is a fan of Kill or for anyone who detests especially stupid Souhan #TAKES.

While it hasn't all been bad news (hooray for men's and women's hockey, the volleyball team, etc), I still wanted to highlight some things from the past 2 months that have made me very happy. For this piece I'll take a look at...

My Gopher buddy in Madison shared a story with me that I think illustrates how noticeable the improvement of the student section has been this season. His 7 year old nephew Wyatt was at the UNLV with his grandfather (my buddy's dad). Wyatt has been going to a couple of Gopher games every season since TCF opened in 2009, so he's familiar with the TCF game day atmosphere at has an excellent sense of what is "normal" for a Gopher game. So it really stood out to me when I heard that early in the UNLV game he got excited and said "Grandpa, look at the college kids. They're really participating this year!" This wasn't the third quarter break or anything special, it was just a moment when the students were rocking.

I'm with Wyatt on this one. The student section has been impressive so far this year. Yes, the normal caveats about number of season tickets sold apply, but the baseline number of students who have come to games (not the high water mark represented by the Iowa game, although the section was super awesome that day as well) have still been louder, more engaged, and had a bigger impact on the game day atmosphere than any student section since the 2009 edition.

I was already planning on writing this piece, but I felt it was especially important to do so after reading this article from The Daily on Friday. It's not a bad piece, it just includes an anecdotal opinion that I've heard voiced in other circles that I think is pretty off base.

Though many fans have contributed to the drop in attendance, marketing senior Tyler Othen said he's noticed a dwindling number of students attending games lately.

Othen has held season tickets every year he's attended the University, and he said student attendance this season is the worst he's ever seen.

"Homecoming is one thing," he said. "But with some upcoming games, you kind of forget about them because you don't hear about it."

Othen said he thinks Minnesota's struggles on the field have had the biggest impact on student attendance. The Gophers are 9-25 in Big Ten games since TCF Bank Stadium opened.

In addition to the team's poor play over the years, Othen said the cold Minnesota weather keeps even more students away from games late in the season.

"People sometimes view [football] as a warm-weather, social event," he said. "When it starts to get cold, there's barely anyone in the stands."

In my opinion his anecdotal take on the student section is both right and wrong.

What I agree with:

- I'd argue that the "cold weather" attendance issues are as much about the Gophers having poor B1G records than the temperature, but I'm sure the cold plays a role.

Now, astute observers will note that the size of this year's student section doesn't really surpass last years and is smaller than at least the 2010 iteration (at least on paper), a comment that I would agree with. But there is a noticeably different level of engagement coming from this year's section so far. In my opinion, the section is filling up earlier and the students are staying longer. Both of these can be at least partially attributable to winning, but I'd note that last year's team had a similar start to the season while not getting that level of commitment from the students. Even when the students have had great cause to bolt early (looking at you Iowa game) they haven't. Here is the student section partway into the 4th quarter of that ugly game. There is no more fun to be had if you're talking about watching the game or dancing in between the 3rd and 4th quarters. It's after 5pm and that means it's about time to grab a bite and start getting ready to go out that night. But there they are, almost all the students who showed up that day. 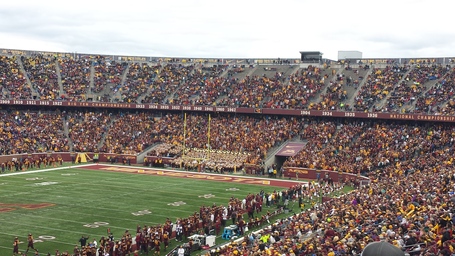 Additionally, I feel like this year's student section is more engaged. They are consistently louder than any section since 2009, and I've been impressed with just how loud they've been able to get given the fact that the average student attendance is about ½ the section's total allotment. The students are participating in the newer traditions like "Do the Gopher" at higher levels, and their excitement around the 3rd quarter break has continued to grow. Incidentally, the decision to rotate some of the music used for that break has really grown on me. Rather than attempt a lame copy of Jump Around the U has wisely decided to tap into whatever the big song of the moment is, be it Gangnam Style or What Does The Fox Say. Anyway, back to the point...

When short segments of a Brick by Brick episode are played on the scoreboards during a timeout, the students start chanting "BRICK BY BRICK, BRICK BY BRICK." When Donnell Kirkwood asked fans to start chanting "KILL, KILL, KILL" on 3rd down, the students responded (this was made especially clear against Iowa when they students had the gold towels). And to their credit, the section swelled in size for the Iowa game (the sort of one game increase that has been lacking in recent years).

The Daily article touched on what I think is a likely cause of this improvement.

The best way to boost fan attendance at Minnesota is to change the culture around the football program, Othen said. "It's a little bit of a bandwagon effect," he said. "Later [in the season], there's this lack of team spirit." That isn't a problem at schools like Oklahoma and Florida State, which have strong football traditions.

It's that feeling of campus unity that Minnesota lacks, Othen said. While winning more games will help, he said, it's up to the students to commit to supporting the team through good times and bad.

I think there is a culture change happening in the student fanbase. It's a slow slog forward, but as I've related above the momentum and improved commitment is noticeable. My best guess on what is driving the change is that the U has committed to engaging the students more since 2009. When the team first moved back to campus, the U took a "build it and they will come attitude" and as a result, the numbers dropped as soon as the team lost. Now, the U has been engaging the students from the second they step on campus as freshman, opened a student tailgate lot, etc. Also, Coach Kill has clearly connected with the students (as evidenced by the early popularity of the "Jerry! Jerry!" chant and the recent adoption of "KILL! KILL! KILL!"). And I think the result is a student section that is growing slowly and growing with members who are more committed. My sense is that every season there are a few more kids who show up on campus and come away thinking that going to games, staying at them longer, and being loud are an important part of the U experience. I know we'd all prefer an overnight change, but while this kind of improvement may be slow it's also more likely to build a stronger core of student fans.

Am I saying this is the best they can be? No, not even close. All you have to do is imagine all the good things I've mentioned replicated across 10K students to see just how much room there is to improve. Will this improvement hold throughout the rest of the year if the Gophers continue to lose? Probably not. As I said, my hope is that we're seeing the development of a better core student base who will stick with the team despite further struggle but I'm also realistic that a long losing spell would hurt. But for me, neither of these takes away from the great effort and quality work the students who are showing up this season have delivered on a game by game basis so far. Which is why they get the nod for my first #TEAMSUNSHINE story.

Hats Off To You Student Section and SKI-U-MAH!