Lil' Red didn't stand a chance. The Cornhusker game was the home opener for the 1936 season, and the Gophers were coming off back to back National Championships and a 19 game unbeaten streak. Bud Wilkinson scored the games only touchdown and Minnesota rolled to its 3rd consecutive title. 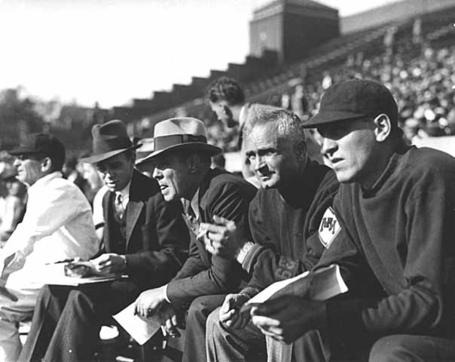 Depending on how you count National Championships the Gophers have anywhere from 7 to 4 (I heard Gary Dinardo last night on BTN only credit Minnesota with 4 and I twitched with anger because he's wrong.). There is in similarity in each of those National Championship seasons. In every championship year the Gophers played and beat the same three teams. Those three teams are: the badgers, Hawkeyes, and Cornhuskers.

wisconsin and Iowa make sense, the Gophers always play both teams, but Nebraska was a bit of a surprise to me. Back in the good old days the Gophers and Cornhuskers match-up was a pretty regular nonconference game. As you may know Nebraska has played Minnesota more than any other B1G team, with Minnesota having the edge in the all time series 29-2-22. 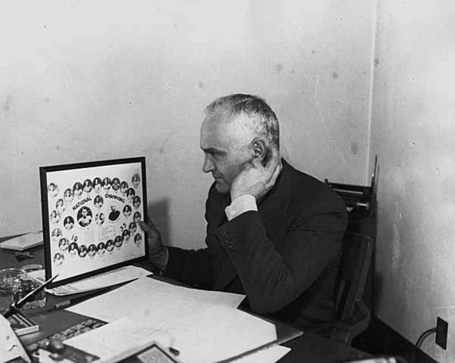 Bernie staring lovingly at pictures of his 1935 National Championship squad. via collections.mnhs.org

I know what you're thinking, its sad because 1960 was the last time the Gophers beat the Cornhuskers. (Sad facts are sad.). But using this logic I assume when the Gophers next beat Nebraska, Minnesota will once again be in the hunt for a National Championship....