Big Ten Football: What's the B1G Deal? The One Where The Gnomes Have Fun Recapping Wisconsin

All the snark that's fit to print.

Share All sharing options for: Big Ten Football: What's the B1G Deal? The One Where The Gnomes Have Fun Recapping Wisconsin

YWas anyone surprised that Illinois couldn't stop Wisconsin from scoring rushing TD's? No? Didn't think so. The gnomes want to snark about that, but they hate Wisconsin. So how about we focus on the fact that the Illini wore uniforms that made them look like this:

Congrats Illinois, you're the first winners of the Sharpie Award for Abhorrent Uniform Coloring. The Champaign Room found some positives:

The defense is still terrible and Tim Banks is most likely gone at the end of the season, but the offense is legit and things are getting better. It's a long way back to being a consistently good program but we're on the right track.

Up next? Michigan State comes to town. Illinois could feel better if they had a defense. I mean, a little better. 2:30 PM CST on ABC/ESPN2.

Indiana let Michigan collect over 750 yards of offense in their loss to the Wolverines. Indiana's defense is pitiful. Remember the "Two Face" award they got? Yea, Kevin Wilson is now missing half of his head. I asked the gnomes what things reminded them of Indiana's defense. Their response? 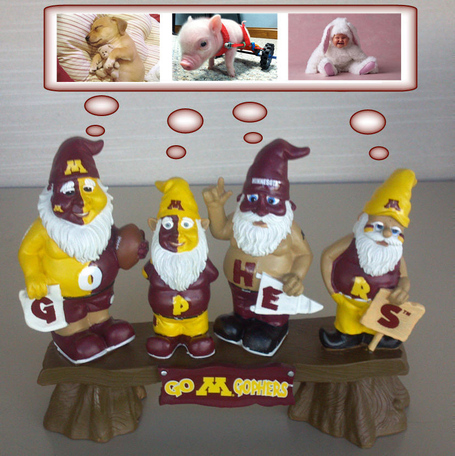 Personally I think they are insulting the Crisp P. Bacon with this wisecrack.

The Crimson Quarry is dealing with disappointment.

We're at a strange place in the program's build at the moment where we're good enough to be in big games, but not good enough to win them with any consistency. It almost makes it harder to watch than when you have no chance. Almost. You can see that Indiana is on the move, but they still have a lot of work to do if they want to be in the upper echelon of the conference. Saturday's game against Michigan proved to be exhibit B in why Indiana is good, but not good enough.

That feeling would seem to be best represented by:

Seriously, if they had anything on the defensive side of the ball Hoosier fans would have a lot to celebrate right now. Given that they are still probably the best shot at bowl eligibility for the Gophers I'm ok with that.

Up next? BYE. Oh goodie, another team with an extra week to prepare for Minnesota.

Just watch, the Gophers will finish with the same B1G record as Iowa again this year but won't have the head to head W. You just wait. Anyway, Iowa put up a good fight on the road at OSU before losing, which did more to remind everyone why OSU is going to be the weakest team in the B1G than anything else.

Anyhow, their 10 point loss was enough to earn them a Close But No Cigar award. 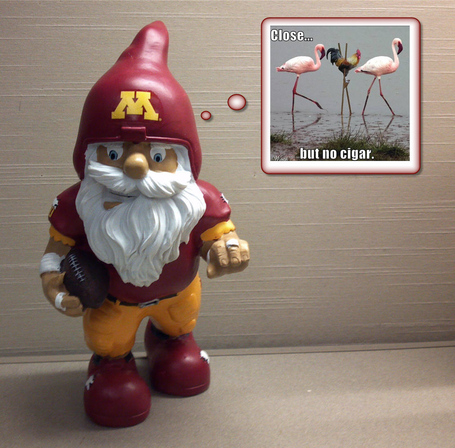 Black Heart Gold Pants is liking a moral loss that they dislike:

Look, I don't like moral victories.  Moral victories haven't had any value for this program since probably the 2000 season.  Nor do I like losing.  Iowa lost to Ohio State today -- that sucks.  That definitely, undeniably sucks.  And, yes, losing a game where you're competitive for three or so quarters is no more and no less a loss than a game where you get trounced by 30 points.  A loss is a loss is a loss.

I'd prefer pretty much the opposite of everything he just said there when it comes to Iowa.

Up next? Northwestern comes to Kinnick. Beware of tubular root vegetables Jake. 11 AM CST on BTN.

Made Indiana's defense cower in a corner. Alternatively, this GIF seems to sum things up nicely.

Oh, and Michigan? Your defense?

Or perhaps better summarized by:

The Hoosiers had absolutely no answer for Jeremy Gallon. As such, Michigan did exactly what should always be the case in this situation: they kept throwing to him.

Despite at least one uncharacteristic drop (there was another, if I remember correctly) from Gallon, he finished with a mind-meltingly insane 369 yards on 14 receptions and two touchdowns. If this were NBA Jam, the ball would've gone up in flames every time Gardner targeted Gallon, who invariably had acres of space between him and the nearest Hoosier defender.

Beat Purdue 14-0. Only 7 of those points were scored by MSU's offense. They had to use a trick play to get them. 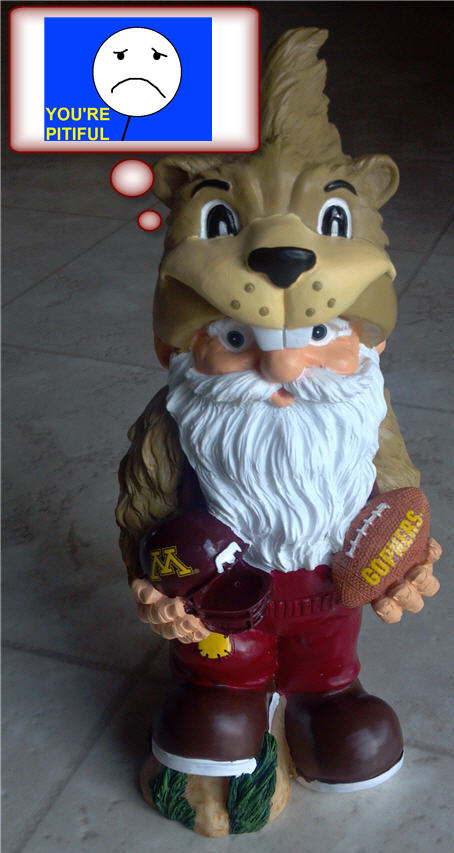 Connor Cook? The Only Colors would like a word:

MSU isn't going to win many games on Connor Cook's arm, so it's important the running game is there, as it has been.

Ok, there's more positives in there somewhere. Perhaps something about a defense?

It's weird when you're a little meh about a shutout, but that's how high the expectations have gotten. Purdue was manball-ing MSU early on, but MSU recovered. Purdue didn't have a three-and-out until the third quarter, and with this game matching two of the best punters, it certainly set the MSU offense back with field position. MSU had just two drives start outside its own 40-yard line.

Of course, the defense had the game's only touchdown for three quarters. They also had five sacks and nine TFLs. Isaiah Lewis also had an interception in the end zone on a deep ball.

Ok, so this game sucked. Feel free to reprise the weekend after Thanksgiving Sparty.

Stupid bye week. What does Corn Nation have to say about Minnesota?

Minnesota's offense ranks fourth in the Big Ten, averaging 210 yards a game. (Nebraska is second, averaging nearly 285 yards. Minnesota and Nebraska are seventh and eighth, giving up 123 and 157 yards respectively on the ground. The Gophers are last in the Big Ten in passing at 118 yards a game, while Nebraska and Minnesota are eighth and ninth respectively in pass defense. The most impressive offensive stat for Minnesota is that the Gophers have scored on 22 of 23 drives in the red zone. The Gophers are also tops in the Big Ten in red zone defense, with opponents scoring 75% of the time when they get inside the Minnesota 20 yard line.

Up next? Husker fans come to the big Twin Cities. 11 AM CST on ESPN.

Just going to leave this here:

Sippin' On Purple is having a tough go of it:

The Disillusionment Council of America is deeply sorry that the things you want to be true are not. They're sorry there's no god, and that your parents were Santa Claus, and that your significant other has been sleeping around behind your back since last July. (Wait, did you not know about that? Whoops. The Disillusionment Council of America apologizes for this premature disillusionment.) But they can't fix the world. They're merely here to remove the veil and show you the truth -- the hideous, cold, awful truth -- and help you live with it.

NU bros, the gnomes would simply like to say...

Up next? Need to prove yet again to Iowa fans that they are not justNorthwestern. 11 AM CST on BTN

I hope you enjoy being shut out of the national title game OSU, because wins like the ones you put up against Iowa aren't going to cut it.

Except Land Grant Holy Land didn't necessarily think it was a good call:

Bradley Roby, no doubt listening to doubters and haters alike for the past two weeks about his play for the last three, goes down in history as the first Buckeye player to have his afternoon ended early as a result of the new rule. In a game with many story lines, losing a star player - an All-American no less - early due to a questionable targeting hit stood as one of the biggest.

But that was only one part of the story the Buckeyes and Iowa Hawkeyes told on Saturday, in a bruising tale of two halves that saw the Buckeyes overpower Iowa in the third and fourth quarters to win, 34-24.

Yea no. He launched. However, Ohio State also did this:

Up next? Penn State becomes the next target. 7 PM CST on ABC.

Bye week for football, so lets see what Black Shoe Diaries has to say about Ohio State:

The gnomes are hurting for snark, so they'd just like to remind PSU that while the NCAA was trying to destroy their program Miami was getting this treatment for letting a booster give their players prostitutes, money, and blow:

Lost to Michigan State in a game that while terrible to watch for most folks, was at least mildly positive for Purdue fans. The gnomes just want to say good work Purdue!

How are you feeling Hammer and Rails?

I don't think I have ever been quite so pleased from a loss.

That itself should tell the depth to which Purdue football had sunk. The Boilers did not come close to getting a touchdown and missed two field goals, but the 14-0 defeat to a very good team represents tangible improvement over the season's previous results.

Their running game in the win over Illinois:

"This was an old-fashioned butt-kicking," Wisconsin head coach Mike Eaves said after the game. "Look that up in the dictionary and you might see this game."

My bad, that was a recap of their 9-2 pantsing at the hands of Boston College in hockey.  Here's the right recap:

In front of 5,129 fans at Agganis Arena in Boston, the Badgers were routed for the second night in a row, this time dropping a 7-3 result to No. 15 Boston University.

Oops, sorry. That was the Sat night squeeker against BU. Let me try that again:

The fact of the matter is this Wisconsin team would be ranked completely differently had it pulled out a win at Arizona State. We all know the Badgers were jobbed and should've at least received an opportunity to win the game, but it's clear the nation views a 6-1 UW squad completely differently than 5-2 one, despite what you believe the team's record should be.

Nope, that's just whining about their position in the polls.Sorry about that:

The positive news is there will be no virtual banner on the ribbon board. The idea of sprucing up the concrete portion of the Kohl Center is a positive one as well. Not certain it was worth the risk of taking down traditional banners, but at least it's not a virtual banner.

Sorry, that's just more on the story of UW thinking their fans are tired of success. Hmm, where did the right story go? Is this it?

The Badgers' fifth-ranked rushing offense ran wild on an inexperienced and overmatched Illinois defense, rushing for 289 total yards. Sophomore Melvin Gordon and senior James White combined for 240 yards on the ground and six total touchdowns, as the 25th-ranked team in the nation averaged 6.3 yards per carry against Illinois' 97th ranked rushing defense.

Yep, that's it. Anyway, I'm hoping Gary Anderson decides to take his running backs to the Springfield Mystery Spot before the Minnesota game.