Share All sharing options for: Minnesota-Nebraska Goodwill: The Sharing of #TEAMSUNSHINE Q&A

So you all might recall my #TEAMSUNSHINE story from a couple of weeks ago. What you might not be aware of is the the #TEAMSUNSHINE meme isn't mine. I shamelessly stole it from Corn Nation and repurposed it for my own diabolical uses. Since it's Nebby week, I thought I'd get ahold of Salt Creek & Stadum, the true originator of the #TEAMSUNSHINE meme to learn about it's origins. Here is that Q&A. When you're done, make sure to follow Salt Creek on Twitter (@tamattes)

The Daily Gopher: So how exactly did the #TEAMSUNSHINE effort get started? Is there any truth to the rumor that it was originally formulated as part of your movement to destroy Lil' Red back when there were suspicions that he could be killed by a concentrated dose of direct sunlight?

Salt Creek & Stadium: Believe it or not, my vendetta against Lil' Red has nothing to do with #TEAMSUNSHINE. In fact, I think Lil' Red is one of those things that is not brought up at chapter meetings due to the differences in opinions among members. Amazingly, some people think he's cute and get offended when I go after Lil' Red. Those same people did not thank me when I did this so I'm not sure what to think. Double standards if you ask me.

Getting back to the topic at hand, #TEAMSUNSHINE was born out of the UCLA lost from 2012. People were bummed out (and rightfully so) and so I wrote a short editorial in the morning links post to bring people back from the ledge. Of course, the actual hashtag didn't really show up in a post until a little while later, and it was really just a joke, used to disarm the people who would accuse me of being a sunshine-pumper. (There's also something to do with Phil Steele, who I believe had Nebraska written in as going to the Rose Bowl all the way up to when Wisconsin realized Nebraska's LBs aren't very fast.) It wasn't until after the Ohio State game that I embraced it.

Nebraska went on to win six games and #TEAMSUNSHINE has been beyond my control ever since. Though I did sound a call-to-arms in August. (I also picked Northwestern to win the Big Ten. Thanks guys.)

Heck, not even Wisconsin or Georgia could kill it. Some of our less enthusiastic members see it as one of those weeds that won't die when you hit it with Round-Up.

TDG: Not that it would really stop me since I'm a #memethief, but do you have any concerns with a Gopher fan stealing #TEAMSUNSHINE as a way to buoy the spirits of the TDG community?

SC&S: I think it's a fair trade for accidentally creating this:

But in all seriousness, I am 100% behind TDG opening a chapter of #TEAMSUNSHINE. I think every team needs to have a centering philosophy like #TEAMSUNSHINE, something to balance out all of the negativity and frustration we so often associate with sports fandom. I think we can all agree that sometimes we forget that we're talking about a game played by young men with a ball that is has a some what unpredictable bounce (SCIENTIFICALLY PROVEN).

TDG: Have you spent any time thinking of what your #TEAMSUNSHINE post would be next week if Minnesota wins thanks to the gift of seven TMart armpunts?

SC&S: I tend not to try and think about things that will surely result in #LincolnPoliceScanner trending on Twitter. But if it did happen, I imagine the CN staff will be working on putting together head coach candidate profiles, because if Pelini loses to Minnesota, I'm not sure if his job can be saved. Hell, I'm not sure if he'd want to stay head coach after that.

All that being said, if Taylor Martinez throws the ball that much, Corn Nation will feature prominently on This Week in Schadenfreude, I guarantee it. I'll be the one posting kittens and cats between "WHY TIM BECK HATES US" posts.

TDG: How would you feel about me referring to you as the #TEAMSUNSHINEGODFATHER while using this image? 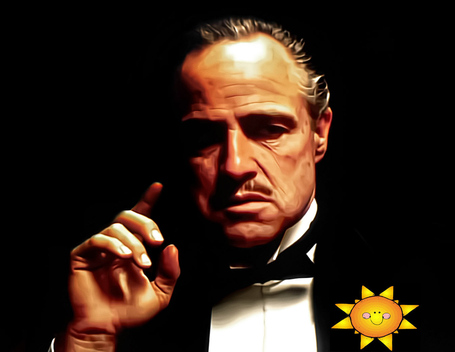 SC&S: That seems like a mouthful. But hey, if we want to turn #TEAMSUNSHINE into a mafia, I'm on board. Let's neutralize the #NegativeNancies and make sports fun again.