Minnesota Hockey: Women Continue Their Streak And The Men Tie BC

The quickest of thoughts because I have to be up tailgating in few hours.

Share All sharing options for: Minnesota Hockey: Women Continue Their Streak And The Men Tie BC

- The first chance I'll have to see the women in person this year is the outdoor game. Was really hoping to catch them before that.

- No highlights or anything yet, which is too bad.

On to the men:

- The Gophers raised their WCHA banner tonight with the McNaughton on hand. I was pleased by this. 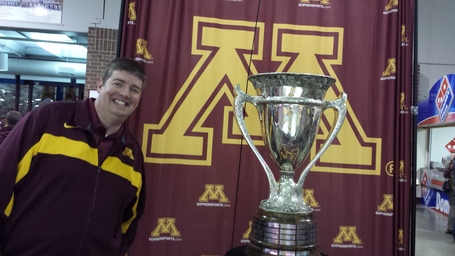 - If you haven't seen it yet, the new intro video is pretty darn sweet:

- The Gophers scored their first goal during the part of the "Camptown Races" chant where the students are saying "he lets the puck go by." It was one of the most awesome moments in terms of timing I've experienced at a sporting event.

- Wilcox was way off his game in the first which was sad. He is still awesome and went into #WALLCOX mode as the game went on. That was not sad

- I really wish we got to see the Gophers play more teams with a wide open style like BC's. It was fun hockey to watch, with a lot of back and forth, scoring chances, and creativity. I wasn't originally going to be going to Sunday's game, but I really think I need to make that happen.

- Johnny Gaudreau is pretty damn good. Speaking of Boston College, BC Interruption has a good recap that is not bullet point based that you might enjoy. #TheAlliance

- Losing Paranteau hurt and you could see the defense isn't all the way there yet in general, but overall they got it done.

- I swear to Jobu, we need to quit it with all the no look dump passes. They don't work and they drove me batty!  =)

- I don't remember who had the scoring chance right at the end of the 3rd, but if that had gone in Mariucci's roof would be on its way to the moon. The place was primed.

- There's swallowing the whistles and then there is what the refs did in the second half of the 3rd period and all of overtime. Unconscionably bad no-calls.

- Ian McCoshen's "save" in OT wasn't legal, but it was still damned impressive. Seriously, it was a play he had to make and I'm not sure how he pulled it off. Still should have been ruled a penalty shot though.  =)