Minnesota Football: The Monday Perspective Moves on From a Signature Win

Share All sharing options for: Minnesota Football: The Monday Perspective Moves on From a Signature Win

Following Saturday's win over Nebraska there has been a lot of ink and discussion surrounding the signature-ness of this signature win and what it means.  Is this a program changing win?  Where does this rank amongst other signature wins over the last couple decades?  Is this is even that impressive considering the obvious flaws of Nebraska?

There are a lot of questions but I am not here to answer them today.  I'm here to offer perspective, but even that is tough to nail down here.

First of all I want to point out that it is ridiculous to make any season defining statements based on one game, or even a couple games.  My how our attitudes on the season have changed since the Iowa and Michigan games.  We seem to change our minds on everything from week to week based solely on how we played on the prior Saturday.  Remember the carnage you read in the aftermath of the Iowa loss?  It was at that point people were completely done with Philip Nelson, they had serious questions about Kill's future and some were wondering why the Gophers don't switch to the MAC. I tried to maintain perspective at that point...

The Iowa game was clearly a step in the wrong direction and one of the more frustrating losses considering you were facing another lower-tier team at home with an opportunity to prove on the field that you are getting better as a program. We fell on our face, we then went to Michigan and were beaten soundly and now things are looking their bleakest. But the season is not over and grand judgements on the overall state of the program and Kill's ability to move us forward can and should be discussed at that point.

That perspective should still remain today, even in the wake of back-to-back conference wins as double-digit underdogs.  This was a big win, no taking away that.  Even if Nebraska finishes 2-6 in the Big Ten, there are decades of ass-kickings at he hands of the Cornhuskers that were exercised on Saturday.  Not only did we win for the first time since 1960, but we held a lead for the first time since 1964!  14 games and something at or near 56 quarters where we couldn't accidentally take an early lead.  So this IS a big win, one that was clearly unexpected and a generous boost to the 2013 season.  But the season isn't over and any progress made can still go back in the wrong direction.

There are 4 more games to play.  This team is playing well right now and there can be no denying that there has been improvement; not just from 2012 but week-to-week in 2013.  Continue to get better and continue to play like the physical Big Ten team we want to be; the team we were on Saturday.

I am a lifelong Gopher fan, and wins like this past Saturday's are few and far between.  I enjoyed it very much.  But I don't want to start to expect this, just because it happened once.  I hope we don't hang on to this victory too long.  And I hope we aren't satisfied with the season because we have basically met both of the primary goals many of us held to start the season.  Return to a bowl, notch a signature win.  Done right?  Wrong.  There are 4 more games to play.  This team is playing well right now and there can be no denying that there has been improvement; not just from 2012 but week-to-week in 2013.  Continue to get better and continue to play like the physical Big Ten team we want to be; the team we were on Saturday.  0-4 might happen, we are not in a place to be expecting any wins in the Big Ten. What I do expect is that we play with confidence, we play disciplined, we play tough and we are competitive the rest of the way.

I should end there, but there has been something else on my mind lately.  It is the notion or concept of a program changing win.  A win that puts you on the map and sets a new course for a program.  A win that generates some buzz in the recruiting world and makes your program more desirable.  I believe this is a myth, an urban legend; no such win exists.  And even if it did, this one would not qualify.

Tim Brewster loved to declare any Big Ten victory as a program changing win (see @Illinois in 2006).  But Brew never found a win to change the fortunes of his program.  Partially because beating Northwestern might have been his biggest win, and partially because it does not exist.

Certainly beating a team or two that you shouldn't, beating a team that is in the hunt for a BCS title game appearance or even notching a major bowl victory can be huge and generates a ton of positive coverage for your program.  Absolutely it can open the eyes and be a factor for recruits who were already considering your program.  It can help to boost momentum, but I firmly believe 1 win regardless of the opponent or quality of the win does not a program change.

How about a few examples of potential program-changing wins in recent memory.

Great wins are great wins.  They excite your fan base, they instill confidence in your team and it is a nice boost to the season.  Sustaining them over multiple seasons is what matters.  Programs are not changed over night, a course is not set with a big win.  If you are building a program, eventually significant wins occur more frequently and against higher caliber teams.  Saturday's win over Nebraska was huge.  I hope it is just the start.  I hope that soon beating a ranked team at home is not cause for storming the field.

With all of that said.  Saturday's win really was a lot of fun and below are some of the spoils...

"I thought we got physically beat up."

Dirk Chatelain of the Omaha World-Herald,

"But at the end of the day, I come back to this truth: If I had put Nebraska and Minnesota in shirts and skins, you wouldn't have known which one has decades of tradition and which one doesn't."

How about some love from Kirk Herbsteit

Congratulations to Minnesota on a huge win!!! Bowl eligible for 2nd year in a row!!

Just look at this be pleased with Saturday's win... 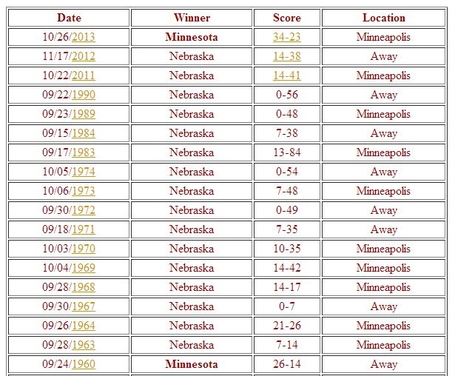 Lastly, I re-edited my slo-video of Nelson's game capping touchdown.  I thought this was kinda sweet.