Not quite ready to move on.

It's almost time to move on to talking about Indiana. ALMOST. I'm still too giddy after Saturday to get there yet. I knew I wanted to write something, but wasn't sure what route to go with it. Matt already covered the potential significance of this game. GN already made sure we stay grounded. And given my "state" on Saturday, I don't think I'm the right person to give a detailed schematic breakdown of what the Gophers did right (watching the game off the DVR certainly helped though). So I decided to be me and deliver a Smorgasbord grouping of thoughts about Saturday. Enjoy!

Quick Thoughts On The Game (In Bullet Point Form Of Course)

- I loved all the pre-snap motion. I loved the formations they started in and the variety of ways they moved players around. It's the first time since the bowl game that we'd really gotten to see it and it was just fun.

- Wildcat formation where Nelson comes in motion to take a QB sneak. LOVED THIS. Will not grow tired of seeing it. Realized after the game that I managed to get my own video of it:

It was a great call because of what it opened up in the defense.

- Goodger. Everything Goodger was wonderful.

- Speaking of, Ben Lauer lined up out wide to sneak Goodger up the seam? I mean, WHAT? /giggles

- David Cobb being a beast. Not going down on the first hit. Destroying Nebraska's hopes yard by yard.

- Everyone who decided to go on the field? You rock. "Act like you've been there yada yada yada..." HAVE FUN. Screw the naysayers. When we've started winning and the fun is already there we can act like we've been there because we will have been. 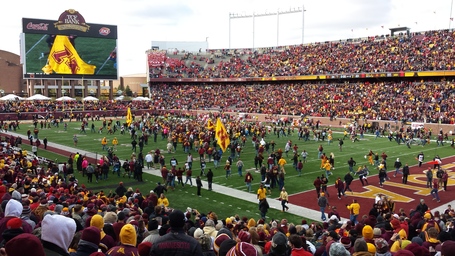 - Phillip Nelson's passing. The stat-line doesn't show it, but he was pretty done solid. The accuracy was much improved overall. Not perfect, but the reason he wasn't over 60% passing or better was drops that were on his receivers, not on him. That's a step forward from where he was in previous weeks.

- The weather. Yes, that wind was annoying in the lot but it was sunny and crisp and really what more can you ask of from a fall day?

- The fans who didn't sell out, most important among those being the great folks of Section 133 and and the students (Hats Off to you again student section!). You all were great.

- This. This never gets old.

- Running into all sorts of friends after the game was over.

Just a great day all around!

Like I said, Matt already handled the signature win topic. I want to talk about an even more important ranking. How much fun did you have in the Nebraska win? That could be at the game, at home, wherever or however you experienced this past weekend's upset. What I want to know is where does this rank in your all time list of fun games? NOTE: Pick whatever definition of fun you'd like, because it's a completely subjective measure. These could be games you saw in person, heard on the radio, whatever. You make up the rules.

1) Nebraska 2013: Yes, I'm sure the fact it just happened has a lot to do with it but dammit I had an awesome day!

2) Wisconsin 2003: Another day that just turned out great all around.

5) Syracuse 2012: Awesome atmosphere, lots of great moments on the field.

6) @ Nebraska 2012: Told you it this was a subjective ranking for fun. The Gophers got their butt kicked, but I was having too great a time to care.

7) @ USC 2011: Great sports weekend with buddies down in SoCal, complete with a fantastic time tailgating and going to the USC game.

8) Toledo 2004: Lots of stories from this night plus Winston went out and called his own number twice on the fake punt.

9) Iowa 2010: Confused a lot of people in an outlet mall outdoor patio area with my hooting and hollering. It's a long-ish story with gopherguy05 guest starring as Vin Scully.

What would your "All Time Fun Game" ranking be?

Where does Nebraska rank on it?