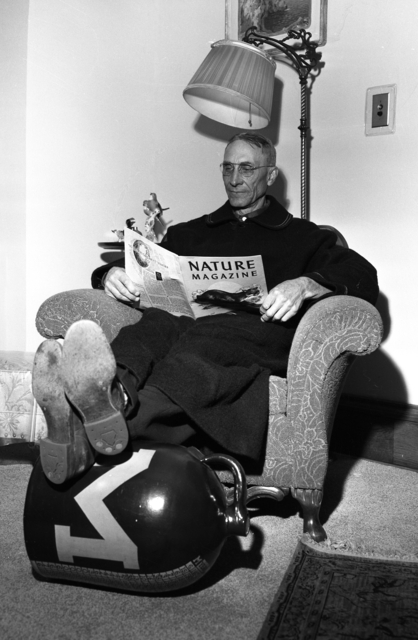 Oscar Munson with the Jug in 1948 via collections.mnhs.org

This is both the story of both the Little Brown Jug and an obscure University of Minnesota employee.

Oscar Frank Muson MUNSON (haha illiteracy is real!) was born in 1879 to Swedish parents. It is unclear if he was born in the United States or in Sweden but by 1903 he had moved into a custodial position for the University of Minnesota.

In 1903 Michigan was riding a 29 game unbeaten streak when they arrived in Dinkytown Anticipation was at a fever pitch for the Halloween matchup between the Golden Gophers and the "Point-A-Minute" Wolverines (they had literally averaged a point a minute in 1902).

Minnesotans crammed onto the student made wooden bleachers at Northrop Field far surpassing the 20,000 person capacity. When the bleachers were full kids started climbing trees and telephone polls to catch a glimpse of the game. 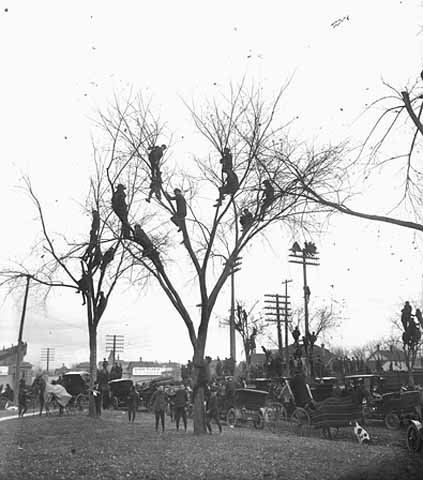 Fans trying to sneak a view of the 1903 Minnesota vs Michigan game via collections.mnhs.org

With only a few minutes remaining in the game Egil Boeckmann of the Gophers tied the score. The crowd was so excited they rushed the field and in the chaos Dr. Henry Williams and Fielding Yost were forced to agree to a tie, ending Michigan's winning streak. 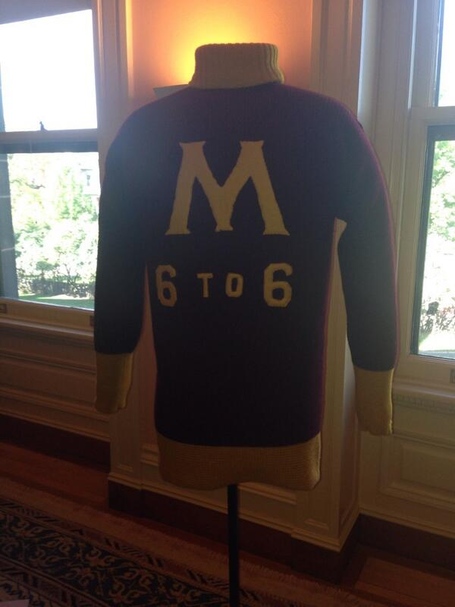 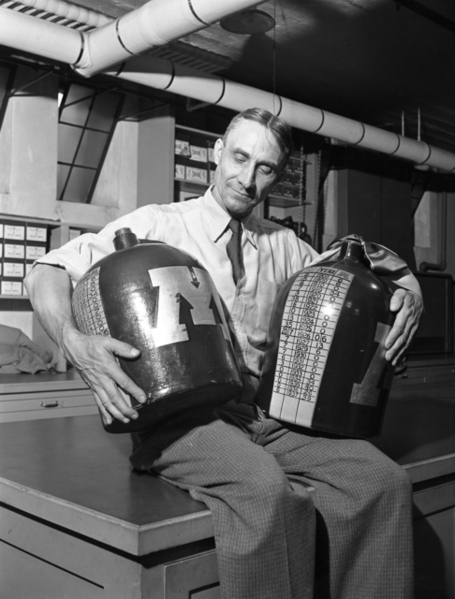 Oscar with both jugs in 1938 via collections.mnhs.org

While the celebration of the tie carried on through Minneapolis, the young Munson was cleaning up and came upon a leftover Michigan water jug. Some sources say that Michigan had brought their own water jugs because Yost was worried Minnesota would try poisoning their water (kinda cool?). Oscar collected the jug and giving it to the head of the athletic department uttered the famous, if very Scandinavian phrase, "Yost left his yug." Michigan being too cheap to buy a new water jug demanded its return. Cooke refused and kept it in his office. For awhile Cooke had painted on the jug "captured by Oscar". 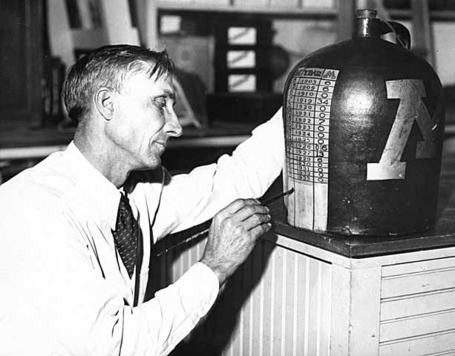 Oscar painting the jug in 1933 via collections.mnhs.org

It took a while for the idea of a traveling trophy to catch on. There was no precedent for a traveling trophy before the Little Brown Jug. In 1909 it was suggested by Minnesota captain John McGovern that they wager the jug. It was a dumb bet as Michigan won handily. After that Michigan briefly left the Big Ten (because they were pissy about something) so Minnesota didn't play the Wolverines again until 1919. When the Gophers won in 1919 Michigan tried to pretend they had lost the jug, eventually "finding" it in a trophy case. After that the tradition of the traveling trophy was truly born.

Oscar Munson parlayed his fame in capturing the jug into a promotion from janitor to equipment manager, a position he would keep at least into the 1940s (it is unclear when he retired). But little else is known about the man. Here are a few facts about the man behind the pictures: he lived most of his life in Dinkytown (neat), he married Anna C. Munson (probable babe) and had a child Gorden (cool name?). And lived to the ripe old age of 81 (Oscar passed away 3 days before the end of the 1960 season). From the sound of it like he had a nice life. 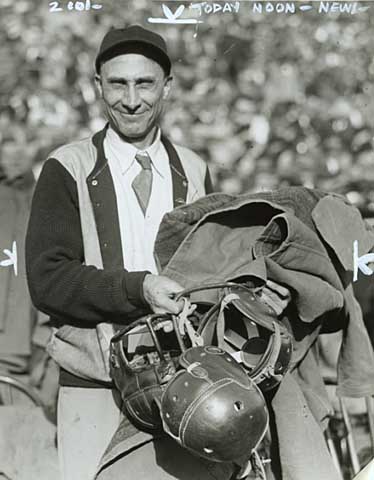 What makes Oscar Munson noteworthy is that he was there when Minnesota arrived on the national scene (by tying Michigan), and was there during the glory years of the 1930s. In all of the old photos of Gopher football Oscar is one of the most photographed subjects. I assume he's photographed because as the equipment manager taking care of the trophies was part of his duties. But the striking thing is how happy Oscar seems in the photos. He smiles like a fan would. Out of all of the trophies Oscar seems happiest with the Little Brown Jug, which makes sense, it was his trophy. Oscar is my guy. 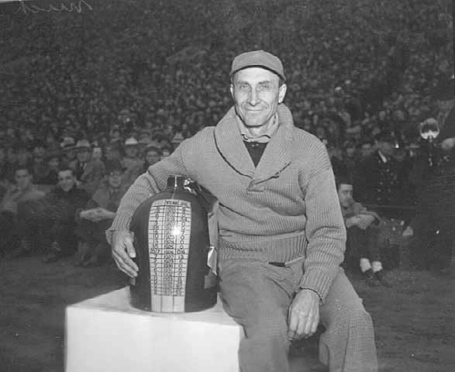 Oscar giving the Little Brown Jug a thug hug in 1940 via collections.mnhs.org