All the key information for Saturday's game in Bloomington, plus a fun game of Hoosier Mad Libs.

Internet: BBTN2Go for your computer or mobile device.

3-4, with games where the offense made it seem like Indiana was this...

...combined with games where their defense made them look like this...

Sometimes this happened during the same game. See: Michigan game.

This is normally where'd I quickly preview IU and highlight some players. But I've been in a work bunker today and I really just need some non critical thinking time. And I mean, c'mon! Do you really need the details to know what we're getting here? The Indiana script is rather plug and play right now. In fact, I think it deserves the Mad Libs treatement.

OFFENSIVE SKILL POSITION PLAYER ONE is having a great year DOING SOMETHING IMPRESSIVE WITH HIS ARM/LEGS/HANDS/SPEED/JUMP SHOT. Not to be overshadowed by his teammate, OFFENSIVE SKILL PLAYER TWO has been getting attention by helping the Hoosiers rack up RIDICULOUS STAT INVOLVING MANY YARDS AND POINTS while performing like a SOME SORT OF SUPER FAST HIGH END CAR. Coach Wilson had this to say about his offense: "COACHSPEAK PLATITUDE PRAISE FOR HIS SENIOR LEADERS PLATITUDE PRAISE FOR THE LAST OPPONENT/UPCOMING OPPONENT PLATITUDE INSPIRING SLOGAN."

The defense on the other hand is UNWATCHABLE/HORRIBLE/A DISGRACE TO PEE WEE DEFENSES/NEEDS TOO MUCH WORK TO BE EXPLAINED IN THE SORT OF SHORT SPACE THIS LITTLE FILL IN THE BLANK SECTION IS SUPPOSED TO OCCUPY/INSERT A BURNING DUMPSTER HERE.

See, it's like a choose your own adventure story where every choice you make as Indiana's defense involves you dying a slow painful death.

1) So your defense is a rotten fish-head sitting on top of a bed of dog poo...what do you do in that situation?

For all the crap I'm giving IU's defense, if IU's offense is lighting up the Gopher secondary, one good stop could very well be all that is needed to create a loss (and possibly a pretty good sized one). If IU's offense proves mortal, then their defense could be the reason the Gophers keep a small but insurmountable lead through the second half.

2) MEMORIAL STADIUM WAS BUILT ON A PET CEMETERY WHICH SITS ATOP A FORMER MURDER HOUSE WHICH WAS BUILT BY DESECRATING AN INDIAN BURIAL GROUND.

In case you are unaware, the Gophers have had some issues with playing on the road at Indiana in recent years. 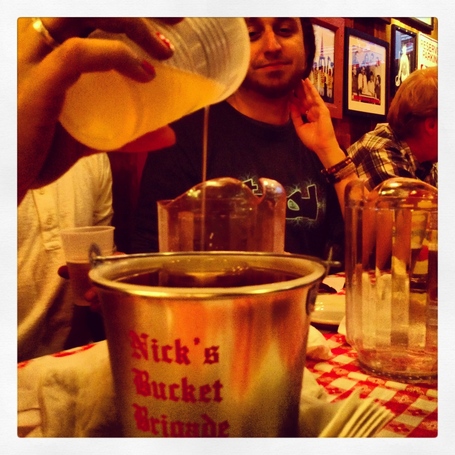 I expect that for those who partake, the above game could be the cause of and solution too all of a fan's problems this weekend.

I ENCOURAGE/DARE YOU TO COMPLETE AND SHARE A HOOSIER MAD LIB IN THE COMMENTS.