Jerry Kill and his battle with seizures this year got more press, this time from the Washington Post's John Feinstein.  This is a well-written article that touches on the touchy subjects (without cheap-shots) and looks at the difficult questions facing Teague.

Clearly, Teague isn't thinking that way. "I think he's an amazing coach," he said. "He knows what has to be done for us to have success. Most of his staff has been with him forever, and when these health issues happen they're almost seamless in the way they deal with it. His players love him. We all want him to coach here for a long time."

So far  it appears as though Teague is 100% behind Kill.  I would say that missing 6 out of 20 quarters this year is getting to be a higher percentage of missed gametime than in other seasons and is significant.  But much like The Monday Perspective pleaded for patience with the Kill Era, we should let this season play out with his health.

Gopher Hoops Recruiting News - there never seems to be a shortage of recruiting news this year with Gopher Hoops.  I guess having 3 of the best players in the country in your backyard and a new coaching staff that

Lastly, you have to get these pants!  I know they've been mentioned around here but they are seriously sweet.

Dockers Gameday Pants are your perfect below the belt gameday gear for those of you who do not prefer Zubaz.  Also available in khakis. 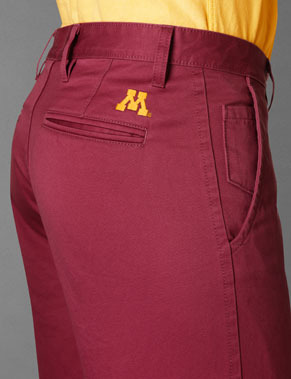