Share All sharing options for: Minnesota Football: The Monday Perspective During Hate Week 2.0

Personally I wish we had a separate name for Wisconsin's hate week, and reserve "Hate Week" for Iowa; but that is a losing battle for me. And regardless of my wishes, HATE WEEK is here and the Badgers are coming to town on Saturday afternoon. This is a fun week already. The Gophers are ranked in the latest BCS rankings and the Badgers are coming to town for 123rd meeting between these two programs.

Saturday better have a huge student section, all of the seats should be filled and I am expecting a passionate atmosphere.

Today's perspective is really coming from a very zen-like place. Each of the past four Gopher wins has slowly moved me from being convinced that Wisconsin was going to kill us to thinking that we can keep this game competitive and have a shot. We are clearly still dogs on Saturday and Wisconsin is a very good football team. But I don't care. The Gophers have been a consistent team that is playing fundamentally sound and they are being physical along both lines of scrimmage. They don't beat themselves, they are improving as the season goes along and I believe they are playing with a high level of confidence.

Don't mistake this for me being confident in a win, but it is confidence that this Gopher squad will not wilt and will be competitive. Wisconsin is rather good this year. They are the only team to have hung within a touchdown of Ohio State (at Ohio State) and their only other loss was a blown call by Pac 12 refs at Arizona State. Just looking at the Big Ten stats you'll see that Wisconsin ranks really high in virtually all significant statistical categories.

So they don't rank in the top 3 of the Big Ten in passing yards and 3rd down conversions, but everything else is pretty good. On the other hand their Big Ten schedule has afforded them to miss Nebraska, Michigan and Michigan State so their numbers might be a bit skewed with games against Illinois, Purdue and Indiana but now I'm digging pretty deep for positivity.

But back to my point of not really caring. This has been the most fun Gopher season in a very long time. A win over Wisconsin would put most of us into a frenzy, solidify a very good bowl and give us something to be proud of in our trophy case (intentionally offensive to the offensive Governor's Bell). But a loss doesn't really do anything except drop us out of the top 25. A competitive game after the Gophers have had 2 weeks to heal up and prepare for the Badgers shouldn't be too much to ask.

By the way, the early weekend forecast is not looking so great. Bad for facing a team that likes to pound you and bad for a Saturday when there will be a lot of recruits in the building. 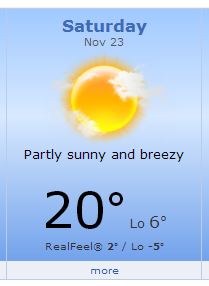