It's kind of a weird start to the week when it comes to football, as there aren't a lot of stories written in the local press yet about the upcoming game with Wisconsin. I expect those will drop for tomorrow.

- People sometimes forget, but Phil Nelson is from a family of Badgers and grew up in the Madison area. Which makes this game the biggest of his career for a couple of reasons. Phil is keeping his head though:

And as monumental as a victory over Wisconsin would be for the program and for his family, Nelson is trying to keep that game -- and his entire career up to this point -- in perspective.

"This is one that not only me and our team but all the fans and the people of this campus ... this is the one everybody wants a lot," Nelson said. "But I think I learned last year, I'm just trying to have fun playing football and not let anything get to me."

- Joe C. says there is more on the line this weekend then just the Axe. Ruining the BCS dreams of Wisconsin and taking the Axe back? Yea, a win on Saturday would be pretty sweet.

- POLLS: As you may have already heard, the AP still doesn't like us (boo!!!!). The Coaches do, moving Minnesota up to #23. So does the BCS, as their black magic places Minnesota at #25.

- POWER RANKINGS: Consensus among the ones I looked at this morning is Minnesota as the #4 team in the B1G right now. (ESPN, Detroit News, CSN Chicago, BTN). With #3 Wisconsin this Saturday, the Gophers will either move up or down.

I'll have some thoughts later today, but here is some of the post Streak coverage.

- Jason Gonzalez of the STrib has great coverage of the reaction to the end of The Streak. My favorite part of his postgame story was his description of what happened after the final horn sounded:

The Ridder Arena crowd roared as North Dakota rushed the ice in celebration of a 3-2 victory on Sunday afternoon. The ovation, however, belonged to the Gophers women’s hockey team despite the end of its exceptional 62-game winning streak.

The longest winning streak in college hockey, women’s or men’s, had been broken, and still an announced 2,435 fans showered the Gophers with extra applause as a reminder of what had been accomplished. The streak stretched over three seasons and two calendar years, and included a 41-0 national championship run.

That's how it should be.

Jason also has some good quotes and video in his postgame blog:

Brad Frost:
-We’re not sad it’s over, we’re happy cause we were a part of it. And I’ll tip my hat to anybody that can go to 62 or 63 games without a loss.

Rachel Ramsey:
-It’s frustrating being upset, but at the same time it’s an amazing to be part of it. As bad as this sounds, it’s a relief. We’re really, really honored to be a part of the 62-game streak.

Bethany Brausen:
-I knew it was going to happen at some point and that was OK. Now that’s out of the way it’s a slight relief in a way because it’s not the primary focus anymore.

- Want to see every team Minneaots beat during The Streak? The STrib has got you covered.

- In case you missed it, the Gophers earned their first road win under Coach Pitino by rolling over Richmond, 74-59 on Saturday night. Some things that jumped out at me from Amelia's recap:

After struggling against a plucky Richmond team through most of the game, the Gophers regrouped, holding the Spiders (2-1) without a point after they took a 59-55 lead with 7 minutes, 25 seconds to play. The Gophers finished by scoring the final 19 points of the game.

19-0 runs to end the game are impressive. Delivering one on the road against a not terrible opponent is more-so.

The pressure defense that the Gophers have been using became a weakness with the quick Richmond guards whizzing past them for easy transition baskets.

"We let them get a full head of steam," Andre Hollins said. "We didn’t get back tips and we didn’t give our big men too much help and they were attacking them."

The fact that the Gophers were getting beat playing their preferred style isn't wonderful. However...

The Gophers took a timeout after Kendall Anthony’s layup gave Richmond its 59-55 lead. When the Gophers returned to the court, they ditched the press and switched to a half-court zone defense. Suddenly, it was Richmond that looked rushed, and the Gophers capitalized.

"We went zone because they were carving our man up really good," Pitino said. "We couldn’t get stops and we zone and it worked. Their man offense is really tough to guard, [coach Chris Mooney] is phenomenal."

Always good to see your coach be willing to switch things up when needed. That's a positive.  Also good was how the Gophers worked the glass to out-rebounded Richmond 54-37.  Normal caveats about opponent quality apply, but still a nice win to bank early in the new season.

Eliason, Austin Hollins and DeAndre Mathieu were out for most of the first half after collecting a pair of fouls each. Without them, the Gophers' struggled mightily on defense and were forced into the following lineup: Andre Hollins, Wally Ellenson, Malik Smith, Oto Osenieks and Joey King. It looked a bit awkward, and Hollins seemed to have an adjustment period, but ultimately the Gophers were able to hold Richmond well enough during that time. The Gophers had their most fouls of the season tonight, with 20.

I don't think it will surprise anyone, but fouls might hurt us this year.

- The story of the day? Austin Hollins and his rebounding. Both Marcus and Amelia take a look at what has gotten into the Gopher guard:

Is this what we can start to expect from the senior guard?

It seems a bit ridiculous to even muse about it. Until last week, Hollins had never had more than seven rebounds in a game, and he’d only reached that plateau twice in his career. Besides, at a lanky 6-4, Hollins doesn’t exactly have a reputation as a bruiser, part of the reason the four-guard lineup the Gophers have been forced to roll out on occasion has been so risky.

But now, even he’s not sure that this isn’t the new norm. The last two games the rebounding has appeared to come pretty naturally for him, and who’s to say the trend won’t continue, for at least a little while longer.

"We’ll see what happens," Hollins said. "I’m just going to go out there and play hard."

- Were you under a rock on Saturday, watch this for GIFs.

- Seriously, that Auburn/Georgia game. Just...wow. Make sure to click to see a new GIF of ultimate dejection that our story editor wouldn't let me insert for some reason.

- Florida State wins so big they play hangman on the sidelines. For reals. 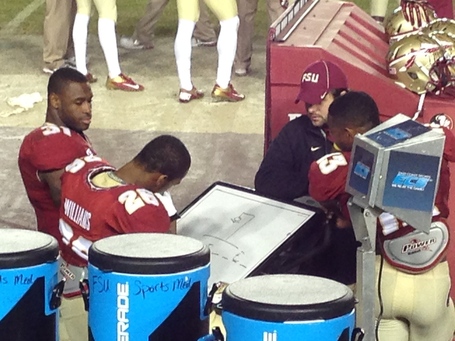 - This dunk is alright I guess.