Auburn Beats Alabama: College Football Is The Best And I Wish The Season Would Never End

Tonight is just another reminder why I love this game.

Share All sharing options for: Auburn Beats Alabama: College Football Is The Best And I Wish The Season Would Never End

College football is the greatest.

I'm reminded of this fact every season, but tonight was just so surreal that I had to stop saying it to myself and put digital pen to digital paper to share this thought with the world. Nights like tonight. I mean...wow.

I should be bummed because the Gophers lost today but I can't be. I just can't. Because I saw a game end on a missed field goal returned 109 yards for a touchdown. That alone would be awesome. But it happened at the end of a rivalry game. A game between two fanbases that H-A-T-E each other. The kind of game that makes me love college football even more.

I was in a Carrabbas Italian Grill in Cincinnati, OH when this all went down. Just a normal dinner with my wife and one of her friends. But there I was, screaming "GO GO GO!" at the bar TV. Like a madman. And I wasn't alone. My wife was on her feet screaming for Chris Davis to get the TD. The guys in the booth next to us were yelling. The Bama fan at the bar with his wife was swearing. IT WAS GLORIOUS. When it was all done, waitstaff left their tables and came out of the kitchen to watch the replay. Time felt like it stopped. Twitter exploded like the Death Star. It was everything I love about sports. It's why I think college football is the best of them all. It's why two teams I have no ties to and that I care very little about can make me WAR DAMN EAGLE at the TV in a chain Italian restaurant with no regard for what I might look like.

I mean...really? WE LIVE IN A WORLD WHERE THINGS LIKE THIS CAN HAPPEN. We watch a sport where this is a way you can win a football game. Sure, sometimes you end up on the wrong side of the line between SHEER UNDENIABLE JOY and all of this...

...and as a Gopher fan I know all too well how the ugly side of the coin feels. But the fact is that this game wouldn't be as fun to watch if it weren't for the emotional roller coaster. If you couldn't feel crushed, you couldn't end up in the place our SBN brethren from Auburn found themselves: 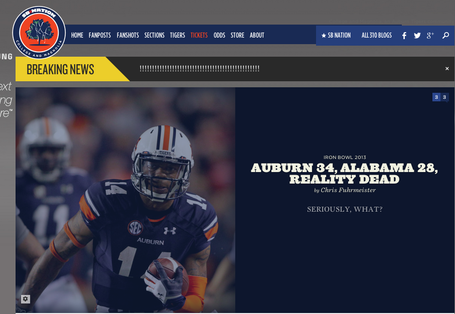 WHAT THE HELL DO YOU SAY ABOUT THIS. CHRIS DAVIS JUST RETURNED A MISSED FIELD GOAL 109 YARDS FOR A TOUCHDOWN. ON THE LAST PLAY OF THE GAME. TO BEAT NO. 1 ALABAMA. AUBURN IS 11-1 AND GOING TO PLAY IN THE SEC CHAMPIONSHIP GAME. THIS IS A THING THAT IS HAPPENING. IT DOESN'T SEEM TO BE A DREAM.

THERE IS NOTHING THAT NO ONE WHO WATCHES SPORTS THAT COMPARES TO WHAT JUST HAPPENED IN JORDAN-HARE STADIUM. THE GAME WAS GOING INTO OVERTIME. AND THEN NICK SABAN LOBBIED TO GET AN EXTRA SECOND PUT BACK ON THE CLOCK. AND THEN HE TRIED TO KICK AFTER ALABAMA HAD MISSED THREE FIELD GOALS IN THE GAME. THAT'S HOW IT PLAYED OUT. THAT'S WHAT HAPPENED. HOW DID THAT HAPPEN? WHERE ARE WE AND WHAT IS THIS EXISTENCE. ARE SPORTS CANCELED FROM HERE ON OUT, OR DO WE CALL SPORTS SOMETHING ELSE FROM NOW ON? BECAUSE NOTHING ANYONE EVER WATCHES THAT IS LABELED AS "SPORTS" WILL EVER BE IN THE SAME UNIVERSE AS THE 2013 IRON BOWL. AUBURN 34, ALABAMA 21 IS SOMETHING ELSE.