The Gophers overcame a size differential against Florida State by coming up big on defense and from beyond the arc.

First, let me note that I was only able to watch last night's game on and off so this won't be a blow by blow recap and it won't have much in the way of player by player assessments. Instead, I'm going to share my general thoughts (many of which are stats based). Those of you who saw more than I did (or who understand stats better than I) should feel to correct me or offer your own assessments in the comments!

How I Felt Pregame

I'll be honest, I wasn't expecting a win. The Syracuse game convinced me this team could play tough teams close and I wasn't going to be surprised if the Gophers did it again. But in the end, I looked at this game and saw what Amelia saw...

Minnesota is still undersized, particularly against the big, physical Seminoles, who have a pair of 7-footers in Boris Bojanovsky and Michael Ojo. Florida State is battle-tested and extremely tough. In a bit of scheduling misery for coach Richard Pitino -- "Embrace?" He asked aloud on Monday? "No. Fear? Yes. Embrace would not be the right word." -- the matchup falls immediately after returning from three games in three days on the islands.

Calling tonight’s game an incredibly demanding challenge is an understatement.

...and thought "Yea, that looks like a game where we lose our bigs to foul trouble and FSU pulls away at the end." Perhaps I should have been buoyed by what GN saw...

FSU does turn the ball over at an alarming rate (22.7% of possessions, 329th in NCAA basketball) and they don't rebound particularly well, so maybe this will be closer than I'm anticipating.

...but I wasn't convinced we'd end up with a big enough TO disparity to matter. Boy was I wrong.

What I Liked And The Four Factors

Quick note: Advanced statsy things will be briefly discussed in this section so click here if you need a reminder on what the "Four Factors" are. If you would like to review the advanced stats from this game yourself, go here.

The Defense: The Gophers won this game in large part by creating turnovers. This is one of those games where the advanced stats do a nice job of clearly backing up what anyone could see for themselves or from a quick glance at the box score. Heck, I'm so pleased I'm going to show give you the pretty picture interpretation anyhow because, bar graphs: 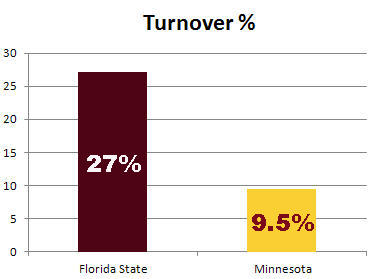 Yea, that's just a little bit of a disparity. When over 1/4 of your possessions end in a turnover, it's going to be tough to win.

3 Point Shooting: I'm not going to speak to the quality of the looks because as I already admitted, I wasn't able to give this game my full attention. But from an advanced stats perspective, 3 point shooting is the other reason the Gophers were able to stay in this game.  I'm feeling artsy, so lets take a look at a few more graphs. First up is FG%: 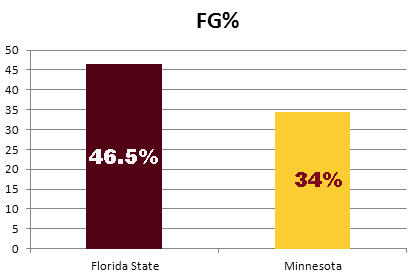 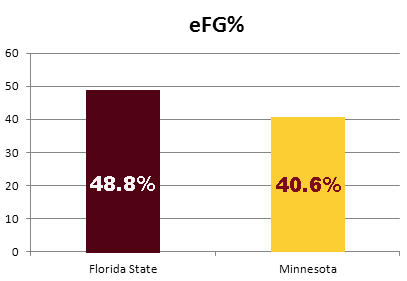 Ok, that's still not great. But it's a 35% improvement in terms of the disparity. What accounts for that difference? 3 point shooting: 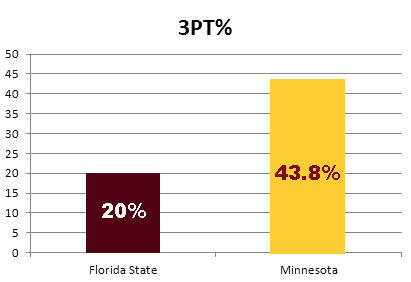 Effective FG% gives additional weight to 3 point shots, which makes sense since they are worth more and are converted about the same percentage of the time as 2 point shots that aren't close to the rim. Minnesota's edge in 3 point shooting allowed them to partially overcome the fact that they only shot 29.7% on shots inside the arc.

Free Throws: The Gophers took advantage of their foul chances much better than Florida State did. Minnesota was 10 of 14 down the stretch while Florida State hit only 4 of 9. Given how the team seemed to struggle with this in past years this was a nice change of pace. For the night, the Gophers had a moderately better Free Throw Rate than FSU: 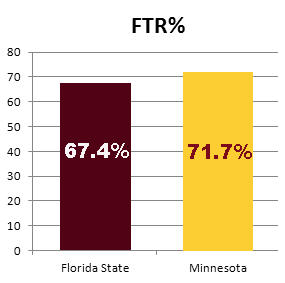 Offensive Rebounding: Again, my inability of watch carefully means I'm not going to speak to why the Gophers hit the offensive glass so well. But the simple fact is that they matched the much larger Seminoles when it came to this metric/ In sheer numbers the Gophers led this category 13 to 10. In terms of offensive rebounds as a percentage of total rebounds they barely trailed: 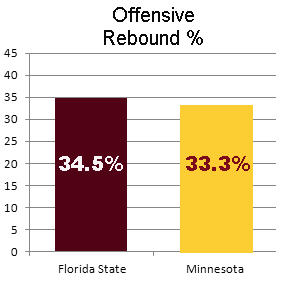 Coming into this game I wouldn't have been surprised to see the Gophers beaten fairly soundly here so this was a pleasant surprise.

Whooptydoo! What does it all mean Basil?

In other words, what should I have said right away? Florida State shot the ball better but Minnesota was able to keep pace with that scoring by being better from behind the arc and from the line. They held their own on the offensive boards and pulled away by forcing Florida State to turn the ball over far too much.

What Did I Hate? 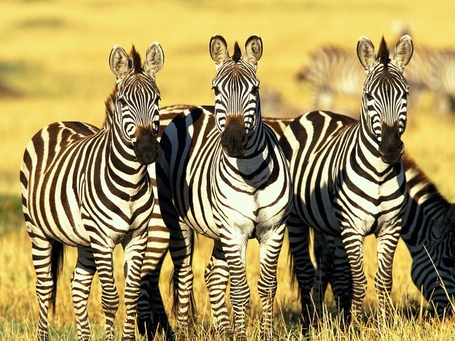 Well, not too much different than what we knew coming into the year. If we turn our opponents over and shoot well from outside we'll be in most games and will win more than our fair share. I'll be interested to see if the Gophers can maintain their performance on the offensive glass as the year continues.

WHAT DID YOU GUYS THINK?