Minnesota Volleyball - The Nugz Remind You To Go Support The Gophers!

The Gophers face Radford tonight at 7pm and you should go! Plus other good stories from the Gopher universe.

Share All sharing options for: Minnesota Volleyball - The Nugz Remind You To Go Support The Gophers!

I'll be honest, the toughest thing about living in Madison isn't all the Badgers or Packers fans around me. It's that I don't have the ability to make it to a larger variety of Gopher sporting events. Without question, I would be at tonight's volleyball match (probably with a press pass) if I wasn't 4 hours away.

So for you lucky folks with the good fortune to live in the Twin Cities area, I urge you to get out and watch the Gophers tonight if you have the chance! Here's all the details you need:

Where: The Sports Pavilion

Tickets: Go here to order your tickets online. I did a quick check of the seating map and there are definitely seats available. So get some friends together and go support the Gophers!  Assuming the Gophers win, here are the details you need for tomorrow night:

Where: The Sports Pavilion

The Enemy: Iowa State or Colorado

Tickets: Same link as above. 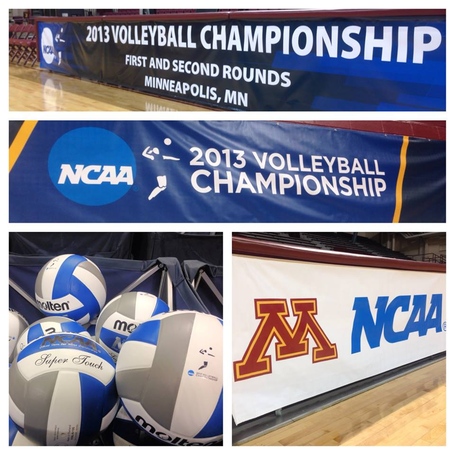 And with that plug, it's on to the Nugz!

- Another reason you should go to the match tonight (and tomorrow), besides the desire to support a great Gopher team? The Pav should be rocking because it has a tradition of being full and loud.

Minnesota also ranked third last season with an average of 3,316.

All-Big Ten middle blocker Tori Dixon, a 6-foot-3 senior from Burnsville, has been watching Gophers volleyball since she was a fourth-grader. She said nothing compares to the support her team gets from its fans.

When the Gophers are on the road, Dixon said, they have to create their own energy on the court. That's not the case when they're in the Pavilion.

"When we play at home, there's already some sort of hype around it, so we don't have to get pumped up because everyone's doing that for us," Dixon said. "We can just worry about playing volleyball."

The bolding above is mine. If you've got friends and family who live in Nebraska/are Husker fans, you'll know how big volleyball is in that fanbase. To be third in the country in attendance with those kinds of numbers is impressive. So don't miss out on the fun!

- Reusse puts on his "good writer" hat and puts together a nice piece that explains how the Gopher Volleyball program reached the point where it became (in his opinion) the most successful Gopher sport in recent history.

- In case you missed the news, Derrick Engel underwent a successful surgery to repair his torn ACL. Here's to a complete and speedy recovery Derrick!

- RECRUITING: Big weekend for the Gophers (something Matt will expand upon later), as multiple recruits including Jeff Jones and Frank Ragnow come on campus for official visits.

- Kendall Shell is on pace to graduate in three years. That's really impressive, as the time commitment of D-I basketball is intense. The Daily also profiles the great work Shell is doing off the court. HATS OFF to you Kendall!

- AmeliaBag time. Props to her for answering even the questions that are half troll.

- Following his impressive weekend against Wisconsin, Seth Ambroz is receiving some well earned pub. The B1G named him First Star for last week. Folks are also talking about how he's taken on a new and more vocal leadership role on and off the ice.

- Hudson Fasching and Brady Skjei made the 2014 World Juniors roster.

- The Daily takes a nice look at Brad Frost's coaching style and what he's done to build up a powerhouse program at the U as well as raise the profile of women's hockey.

Excited that Johnson was back on board, Frost met with him, and the two decided they needed to establish some "non-negotiable" principles they could use to guide their program.

"We agreed together that we knew if we were able to establish these pillars as a culture, [then] we can recruit enough talent that we’d be successful," Johnson said.

Brausen said those ideals are ingrained in the program, and there’s been a noticeable improvement and development in the team’s culture.

Johnson said the culture change created accountability, credibility and trust off the ice, which has allowed for more success on the ice.

Good read and worth your time!

- I love it when opposing players do stuff like this when on the road:

- You think we had it bad for the Wisconsin game? Looks like Bethel might have it a bit rougher for their D-III Quarterfinals matchup this weekend.

- Not everyone was happy when TCF Bank bought the naming rights to the new Gopher stadium. I'm here to remind you that it could be worse. MUCH WORSE:

Cal players will be entering Memorial Stadium to play on ... Kabam Field.

Kabam makes games like "Kingdoms of Camelot" (I almost feel obliged to link to it, because it's FREE!) and "The Hobbit: Armies of the Third Age" (also FREE). Please tell me these games are good, because I want to rule a kingdom!

In their press conference, Kabam announced that they will be re-branding and will release a new logo in the spring.  So let your fertile imaginations run wild with what might actually be displayed on our field. 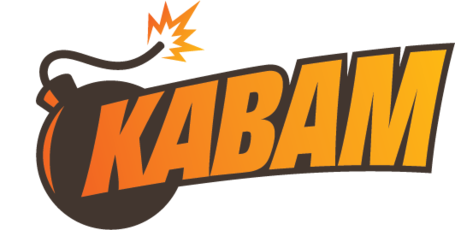 I'll note that in addition to not tying themselves to a funny sponsor name, the U also made the wise choice to keep the sponsor logos OFF THE DAMN FIELD, something that Cal failed at.

- There is way to win at Connect Four every time.

- Members of the Crazy Pants fraternity, I salute you!

The gnomes and I would like to extend our sincerest regrets at failing to deliver snark to you this week. The gnomes wanted me to use an elaborate story that basically had the Underpants Gnomes dragging them into the underwear theft equivalent of Gone In 60 Seconds, but I just shook my head and asked them to gnome up: 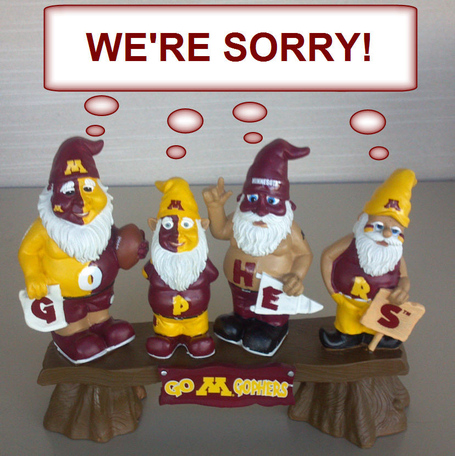 The gnomes would like you to know that there will be "End of the Season Snark Awards" delivered next week.