How Important is Minnesota's Rivaly with Michigan for the Little Brown Jug- and every other B1G School?

With divisional realigment on the horizon, E!SPN.com's B1G blog assessed the importance of football rivalries. They deemed two games involving Minnesota as untouchable, but the Little Brown Jug with Michigan as expendable. This seemed like a good time to assess not just the importance of playing Mee-chigan on an annual basis, but all the other B1G schools. We rank all 13.

Share All sharing options for: How Important is Minnesota's Rivaly with Michigan for the Little Brown Jug- and every other B1G School?

It's Wednesday, and high time we shift the focus away from how maddenning the basketball team has been- well, at least for a few minutes. So why not a conversation about Minnesota's football rivalries, and an arbitrary ranking against all 13 other B1G schools? The boys over at E!SPN.com's B1G blog, Adam Rittenberg and Brian Bennett, decided to assess all the B1G rivalries- both perceived and real- and the importance of maintaing them when the divisions are realigned. They came up with 20 matchups that they considered rivalries, and divided them into tiers of "Untouchable", "Keepers", "Possible" and "Expendable". Six rivalries were considered untouchable, including two for Minnesota with Wisconsin and Iowa, but the Little Brown Jug game with Michigan, a game that was first played in 1892 and has involved the Jug since 1903, was considered "Expendable".

Crazy? Outlandish? Or considering Minnesota has only beaten Michigan three times since 1977 maybe one that's just a little bit expendable? I understand the LONG history and tradition of this game, but because Minnesota hasn't been competitive with the Wolverines for decades, I could handle this one going on the chopping block. Of course, Minnesota's anti-competitiveness probably shouldn't be too strong a factor considering they haven't been able to hang with Wisconsin or Nebraska in recent decades either. Still, I'd agree with Rittenberg and Bennett that the rivalries with Sconnie and Iowa are much more important to maintain than the one with Michigan.

In fact, it got me thinking of the importance of Minnesota playing not just these three, but everybody else in the B1G, including our new incoming members that nobody wants everyone is so happy to have! So here is a totally arbitrary ranking of how important/meaningful it is to play every B1G team for your University of Minnesota Golden Gophers football squad. And just to beat opposing fans to the punch, I realize that outside of Wisconsin, Iowa, and maybe Nebraska and Michigan, that the Gophers would rank near the bottom of a list like this for every other school. But anyway...

If they never played again, I'd be fine with it. I'm sure Hoosier fans would agree- if the Hooisers never played anyone again in football, not just the Gophers.

I am going on record as saying right here and now that the B1G will regret adding Rutgers for two reasons: 1) IF/when the B1G finally cracks the very, very difficult NYC market's basic cable tier, the addition of Rutgers will have little to nothing to do with it. 2) When, not if, Maryland negotiates a signifcantly smaller buyout from the ACC than the $50 million exit fee and the conference realigment tilt-a-whirl goes crazy, there are going to be much, much, much more appealing schools that the B1G could add to get to 14, 16, or 18 than Rutgers. The four ACC schools being prominently mentioned as candidates, as well as Notre Dame and even BC (who I would want solely and selfishly for hockey) are all more attractive, and while I guess Jim Delaney's march to take over the world could push the B1G to 20+ teams, I do think it stops at 16 or 18 and there's going to be a few very attractive options that get left out because Delaney wanted Rutgers. As far as the Gophers, I could care less if they ever play the Scarlet Knights and the only reason they're ahead of IU is because it means a potential roadtrip to NYC. For the record, I am sure fans of The State University of New Jersey feel the same way about us. Mutual disinterest sounds like the making of a rivalry to me!

The only reason they're not lower on the list is because Minnesota's beaten them three straight times. Thanks to the Zooker and Tim Beckham! Wait maybe they should be higher...wait no, I can't think of anyone who's ever said "Hey let's take a roadtrip to Champaign!"

Can't explain it, but the Terps have a higher Q score with me than the schools below them. Maybe it's the batsh*t crazy uniforms and helmets, maybe it's the vicinity to the DC market, maybe it's my affinity for Under Armor? Maybe it's all of the above, but I kinda like Maryland's addition to the conference, and look forward to seeing them come to Minneapolis once every eight years, or whatever the scheduling works out to be.

Since the 1960's, Minnesota hasn't had many competitive matchups, but this, at least of late, has been one of them. Purdue and the Gophers have been battling to be not-at-the-bottom teams recently, and Minnesota got the last laugh earlier this season when a school known for it's engineers and general smartness couldn't adjust to the slant-and-go or sluggo routes. I'll miss Danny Hope and his mustache and worry that new coach Darrell Hazell will make the Boilermakers a handful to play against for as long as he's there.

Look, I get it- OSU is awesome and carrying the torch for the B1G and Urban Meyer is a better recruiter than the rest of the conference combined and "Hang on Sloopy" and the Horseshoe and everything else that goes along with big-time Buckeye football. But as a Gopher fan I've never felt a strong tie with OSU as they generally roll in, kick the crap out of Minnesota, then roll on. True, you could say this about a lot of schools against Minnesota in recent decades, but OSU's dominance of Minnesota takes the excitement out of playing them for me. Hopefully Jerry Kill can change that, but Urban Meyer being Urban Meyer doesn't give me much hope.

This ranking is based on recent history, and maybe, just maybe, one cold Halloween night in 2009 in Dinkytown when Adam Weber threw for over 400 yards and the Gophers upset a good Sparty squad. Minnesota built on that momentum with a loss to Illinois, a should-have-loss to SDSU 16-13, one of the most unwatchable losses to ever 12-0 to Iowa, then a similarily unwatchable bowl game loss to Iowa State. Was that really only four years ago? Gone and unfortunately not forgotten, Tim Brewster. 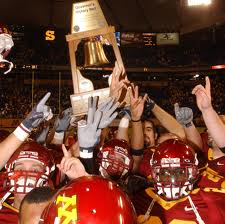 Stirs inspiration just looking at a trophy that beautiful, doesn't it? Serious question: why do we suck at making sports trophies now? The Pig, The Axe, The Jug, and the Stanley Cup are just a few sports trophies made long ago that remain awesome. New trophies that are awesome...yeah, I haven't seen any. New trophies that were laughably bad include this one with Penn State, Penn State's trophy with Michigan State, and of course, the undisputed all-time champion of bad trophies(really, who knew something made in Iowa would be so terrible? What a surprise).

I might be in the minority in both fan bases, but I love that the Gophers and Wildcats play every year, and I hope it continues. If we didn't suck so much at making new trophies, I'd say this one deserves a trophy of it's own, like the "we don't take you seriously" trophy or something with the mantras of the two schools on them like Minnesota's "SKI-U-MAH" and Northwestern's "We're Smarter and Richer Than You". This has been a very competitive series, and despite NU's success, it's still a game I look at each and very year and think "there's no way we lose to Northwestern." Usually I'm wrong, but occassionally I'm right. Add in the fact it gives an excuse to visit Chicago every other year AND see a road game with more fans of the Gophers than the home team, and it's a winner all around.

I'm not saying the Little Brown Jug game isn't important, it's just that because Minnesota so rarely wins this one and because of the lack of proximity to Michigan, I don't rank it as highly as the next three. I'm not saying, I'm just saying.

I know, I know, I know- Minnesota has been even LESS competitive with Nebraska than with Michigan or even Ohio State, and yet they're THIRD? For illogical and totally emotional reasons, I do feel a kinship with our western plains brethren, and after Chris' more-than-glowing review of his trip to Lincoln, well, I just believe the Gophers need to play Nebraska every season without question, and we'll just have to hope Jerry Kill is the man to get Minnesota a victory against the Huskers for the first time since...1960. Egads.

First of all, f*ck Iowa. Second, WHO HATES IOWA? WE HATE IOWA! Third...it kills me to say it, but Lake Okoboji is kind of really awesome. Fourth...ok fine, they're our second most important rivalry, if not first. There are plausible and compelling arguments for having them first for any number of reasons, but I'm putting them here as of right now. Floyd is an awesome rivalry trophy (sorry that you have to live in Iowa this year, buddy. I wouldn't wish that on anyone. Well except Hawkeye fans, and since they all seem to love living there I'd wish for the gift of perspective so they can understand why noone else wants to live there. Or to understand stadium bathrooms aren't for having sex in), the two schools have a very lengthy history of playing, and this is one rivalry Minnesota has actually done pretty well at in recent seasons winning two of the past three and six of the past 15 meetings (if only Timmy Brew was right and 2008 and 55-0 didn't exist. Alas, it did). From Iowa's perspective, we're at best third on their list behind Nebraska and Wisconsin, and come to think of it, would Minnesota be #1 on any other B1G school's list? Guessing not, but still as great as this one with Iowa is, it's not #1 for me.

Barry Alvarez and Bret "Natty Ice" Bielema have just killed Minnesota since about 1995, as the Badgers have won nine straight and 16 of 18 since then. I get that, and I hope a new regime in Madison and continued improvement from Kill and the Gophers can help balance this "rivalry" out a little. But as one-sided as it's been lately, this is still (and better always be) the longest-running rivalry in D1 college football, dating back to 1890. Not only that, but since 1948, they play for Paul Bunyan's Axe, the coolest rivalry trophy in all the land. The history, the importance, and the trophy itself trumps all for me, and that's why I rank it #1. All in all, whatever happens with conference and division realignment in coming seasons, the Gophers MUST play Wisconsin, Iowa and Nebraska every season. If Michigan fits in there, great, but I put the Little Brown Jug a distant fourth on my list.