Share All sharing options for: Golden Nugz - 2.22.13 - The Smorgasbord Takes Over

We all need a break. Gopher sports have us on edge for the most part (even hockey) so today's late edition of the Nugz is going to mostly consist of a free for all of videos, GIFs, and random links. Why? Because anytime I read something about basketball I wish the article looked like something out of a CIA secret action memo: So, enjoy this slightly OT Nugz!

- Now that Gopher fans have proven capable of holding their liquor at TCF, some state legislators want the U to sell it to the gen pop at The Barn and Mariucci as well.

The Legislature passed a bill allowing alcohol sales at the Gopher's football stadium last year. Schoen says the football game alcohol sales proved "Armageddon did not happen" and booze could be monitored.

Currently, only fans in premium seating can buy alcohol at the arenas where the school's hockey and basketball teams play.

The university pulled in more than $900,000 in liquor sales from seven home football games last season. The profits went to the university's athletic department.

Honestly? Probably not a terrible idea.

- Nate Wells offered up his 9 thoughts on the Hockey City Classic. NOTE: Not all of them are actual "on the ice" related so it's more of a "what was my experience" post then a straight hockey recap.

- The stupid NCAA rule created Joel Bauman mess gets national play on CNNSI.com as Andy Staples uses the plight of the U wrestler to call out more NCAA foolishness.

This is the NCAA in a nutshell. When it isn't busy hijacking a federal bankruptcy deposition to gather dirt in defense of its flawed model of amateurism in an infractions case involving Miami, its schools use that same flawed model as the rationale to attempt to crush a young person's non-sports career. Never mind that if Bauman were a minor league baseball player instead of a singer, the NCAA would allow him to keep his baseball earnings and still wrestle. Apparently, those 99-cent iTunes downloads of Bauman's Ones In The Sky represent a threat to the purity of college athletics, even though Bauman has yet to make a cent of profit. "I've not broken even on anything I've done," he said.

Bob Williams, the NCAA's vice president of communications, wrote in an e-mail that Minnesota's compliance department made the interpretation and that Bauman could seek a waiver if the school chose to back him, but that seems awfully unnecessary. Schools shouldn't need to be so terrified of NCAA justice that they threaten the scholarships of athletes such as Bauman. The rule is the problem.

- The Vikings have come to agreement on a baseball configuration according to EL SID. Some examples of how that might look can be found here 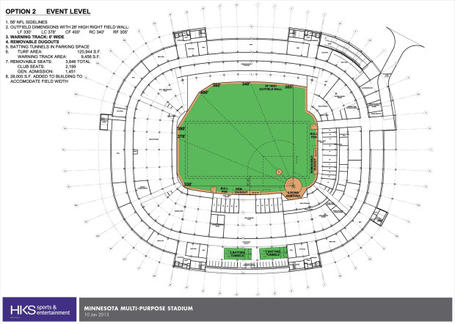 The Minnesota Twins Want To Troll Us All

I know I'm excited for another season of Twins baseball right now...

- Iowa doesn't feel like recruiting the state of Florida for football is worth the effort. No, seriously.

- Wisconsin hockey has an attendance problem.

- Nebraska's basketball arena no longer has the necessary infrastructure to be on BTN (not the only reason but still). Nice work!

- The "B1G-ability" of all the ACC teams is rated by SB Nation. I like the "un-Big Ten" reason for Tech:

Big Ten already has a Purdue.

- Which program would be a better coaching gig if it opened up after this season, USC or Texas?

- For anyone who is still annoyed that TCF Bank got naming rights here is a reminder it could be worse. We could have taken money from a private prison company with a questionable history instead.

- Which conference will be more powerful in the new CFB world, the Big East or the Mountain West?

- Grantland has a nice in-depth piece on pace of play in college basketball and a D-II coach in West Virginia who is bucking the trend with an extremely up-tempo style that doesn't get all wild and crazy like the folks down at Grinnell, IA.

- The worst free throw ever explained.

- A look at why KenPom is a better predictor of NCAA success than the RPI.

- Remember though, using a student fund to buy every athlete an iPad is cool though.

- The STrib has a new soccer blog devoted to the Minnesota Stars.

- FIFA will use goal-line technology at the next World Cup. THANK GOD.

SB Nation has created so many wonderful communities over the years. People feel connected to each other even though they've never met or interacted in a "real world" way. But sometimes you wonder who are these friends made over the Internet, where do they live and what's their story? In order to bridge that divide, Royal Blue Mersey came up with their own take on an idea that originated with Gaslamp Ball.

Take one teddy bear emblazoned with the Everton crest, name him Tony Hibbeart, and send him on a trip around the world.

Members of the Royal Blue Mersey community sign-up to participate, meaning they are willing to receive the bear, post their story about why they are Everton fans, then send the bear on to the next person. They're also encouraged to take pictures with the bear at local landmarks.

- Cincy is going for a big reno of Nippert Stadium. I've always liked Nippert (I think it's cool how it's tucked into campus) and I've thought for a while that a renovated home sideline could look sweet. These images and plans show me that I wasn't crazy. The plan is a necessary one anyway, but UC is also doing it to get into the ACC (hopefully). - NFL player chooses to work at Jimmy John's in the offseason to keep out of trouble. Cool story.

- This is real and actually happened:

- Any story with the bolded statement found below is automatically awesome. It's a rule, look it up.

"At first when I seen the police, I was like, 'What the hell is going on?'' World Peace said. "I just got finished watching 'Zero Dark Thirty' or whatever that movie is. I'm like, 'I'm dreaming, I'm dreaming. Is there a terrorist in the building? Do y'all need my help?'"

After a brief conversation with the police, World Peace put on his Cookie Monster pajamas and accompanied them outside.

- An infographic/story showing you how to avoid drinking an InBev or SABMiller product disguising itself as "local".

- Speaking of non-conglomerate owned beer...Sam Adams is now available by the can. Here's the story of the process that got them there.

- Dude steals Walmart mobility scooter and drives it down the highway drunk. A masterpiece of fail.

- As the article says:

Consider it a PSA: if you don't lower your safety bar, you're gonna have a bad time. 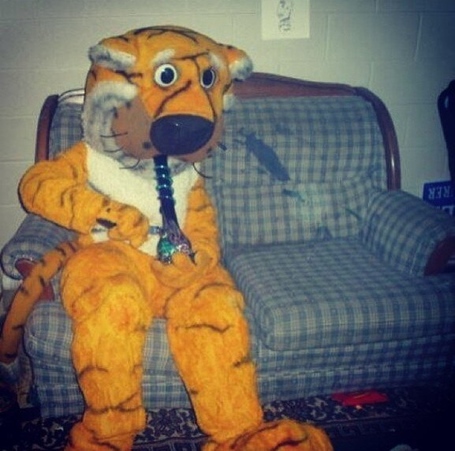 - Winston Churchill wanted to build aircraft carriers out of ice to fight the Nazi's. Yes this is real and not the plot of a crazy movie. Though to be fair, I'm betting it would be a better movie than Battleship was.

Once developed, Churchill planned to deploy the ice-carriers off the coast of France and in the Indian Ocean where they would primarily serve as refuelling stations for the RAF. The plans called for an entire fleet, with each carrier measuring 2,000 feet long, 300 feet wide, and with walls forty feet thick. The entire structure would displace two million tonnes of water and be stitched together using 40 foot blocks of pykrete. Had it been constructed, it would have been the largest floating structure ever built.

Each carrier would be capable of carrying over 300 aircraft of all sorts, including bombers and fighters (like Spitfires and Hurricanes, which did not have folding wings). For contrast today's Nimitz class carriers can carry 90 aircraft. On the downside, however, the designs called for a structure that could only travel at 6 knots (11 km/h or 7 mph).

- The New York Times has been trying out some interesting new media formats for some longer online stories (SB Nation has been doing something similar with their "Longform" stories). Best example I've found lately is this interesting and well written piece on the death of some skiers in Washington during a backcountry avalanche. Worth a look!

- You guys see the crazy video of that Russian meteor last week? Also, an explanation of why Russians all have dashboard cams in their car. Short explanation? Scammers and crazy people.