Minnesota Gopher Basketball vs. Illinois - The "SERIOUSLY, YOU'RE ALLOWED TO COMPLETE A SWEEP YOU GUYS" Q&A

Will the third attempt at a season sweep be the charm? Mark from The Champaign Room is back to answer our questions.

Share All sharing options for: Minnesota Gopher Basketball vs. Illinois - The "SERIOUSLY, YOU'RE ALLOWED TO COMPLETE A SWEEP YOU GUYS" Q&A

The Gophers return home tomorrow to face a suddenly hot Illinois squad that just defeated Indiana. Needless to say, that increases my level of concern for the game a little bit. So I turned to Mark (@SSS_UGod) from fellow SB Nation blog The Champaign Room to find just what has gotten into the Illini and if he thinks they will need to do anything different to pull out a W on the road.

The Daily Gopher: So Indiana...where the heck did that come from? Obviously you had to be ecstatic, but has it changed how you feel about the Illini in general?

Mark: That glorious Indiana game was what can happen when everything goes right with this Illini team. It was nice seeing the squad that beat Ohio State back in January show up again. It hasn't completely changed how I feel about the team, but it has revived hopes that we can actually make the dance.

TDG: Neither the Gophers nor the Illini have had a great go of it since their game in Champaign back in January. What have been the big issues for Illinois in that stretch? Do you think they are closer to being solved after the Indiana win?

Mark: Poor defensive play, inconsistency, and just all around poor play. Tyler Griffey missed literally every three point attempt he took between the Purdue game and the Indiana game, so that certainly didn't help. D.J. Richardson and Brandon Paul reverted to the versions of themselves that we absolutely hate. If the Hoosier game didn't restore Griffey's confidence, nothing will and the other two seniors look to be returning to form.

TDG: What is in the water that has your guys addicted to shooting the 3 ball? Do you see that as a long term offensive strategy for a John Groce coached team or is it the makeup of the current squad that is to blame?

Mark: Over the past three seasons, Groce's Ohio squads were in the top 35 when it came to three point attempts so it's kind of looking like this is his preferred style, especially when he gets his players of choice. Combining him with Paul, Griffey, and Richardson is the perfect storm of semi-reckless three point shooting.

TDG: Speaking of Groce...you guys have had some fun with GIFs of him being really upset. Where does he rank on the current list of B1G coaches in terms of ANGRY! energy and outbursts? Is he ready to rumble with the big dogs? And how would he fare against CHAIRSMASH McCaffery in a cage match?

Mark: He's just so damn GIFable. I think it's the combination hawklike face and incredibly shiny head, which makes it so much more amazing how calm and nice he is when you actually get to talk to him. I don't think he'll ever reach Bo Ryan levels of nightmare inducement, but he's definitely in the upper half already with tons of potential. And while he may not destroy furniture, he can kill with a stare.

TDG: Do you think that Illinois will make the NCAA tournament? If yes, what record will be required to get in and what seed do you think they'll get?

Mark: If they can just hold serve, I don't see how the selection committee can keep the Illini out. Yeah, it's rare to see teams with sub-.500 conference records sneak into the tournament, but most of the time those teams don't have four top 15 scalps on the season. We need to hit at least 20 wins without another bad loss. If we lose to Purdue, Northwestern, Nebraska, or Penn State everything goes right back to fear and life on the wrong side of the bubble.

TDG: What was your favorite submission in the new Illinois mascot Facebook contest?

Mark: Colonel Kernal for sure. 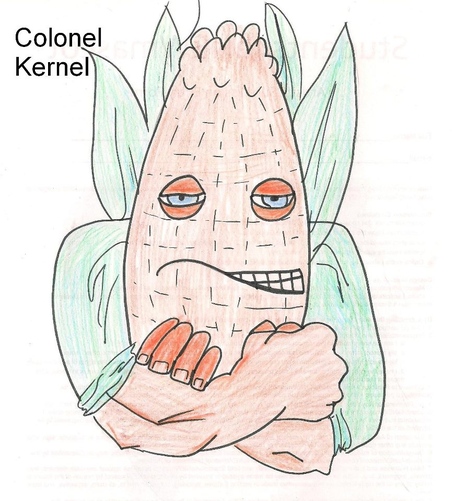 TDG: Last time out you felt the guard play of Illinois would be the difference that would allow the Illini to beat the Gophers. Do you still see that as the key to this game? What would you like to see Illinois do differently this time around?

Mark: I do still believe guard play will make the difference in the rematch. Looking back at the box score from the first game just makes me angry. Only outrebounded by five? Eight fewer turnovers? Six more offensive rebounds? HOW DID WE LOSE? Oh yeah, we shot freaking 3-24 from behind the arc. The team still thrives on threes, but has learned to play inside at least a little bit more. Nnanna Egwu has matured into a legitimate Big Ten center and the Big 3 should have their confidence back.

TDG: Prediction time. Your thoughts as to the outcome of Sunday's game?

Mark: I'm expecting a much better game this time around, pretty much solely because I'm still high from that Indiana win. Might not come down from that for a while. I want Illinois to win this game so badly. If we do turn the upset, we're in the dance for sure. But I don't really see it happening. Minnesota wins a close one.

So, essentially it sounds like it will come down to whether Illinois hits their 3's (no stupid defense guys!). Thanks again to Mark for helping out. As always, be sure to check back tomorrow afternoon for another legendary OPEN THREAD.