Share All sharing options for: Gopher Baseball Off to Solid Start - A Look At the 2013 Team

It is not very often that we talk about something other than football, basketball or hockey on this particular site, but at least a few times we try to give an update on Gopher baseball. This has been an incredibly successful program for the athletic department and deserves some annual attention.

And today they deserve some special recognition after Tom Windle pitched the first Gopher no-hitter since 1993. Windle is a junior lefty who is one of the best pitchers in the Big Ten and will certainly be drafted in June. The nine-inning no-hitter came against the Leathernecks of Western Illinois and Windle recorded 8 strikeouts along the way to the team's 3-0 win.

After that win and the eventual series sweep, the Gophers hold an 10-5 overall record. After a couple of disappointing seasons in a row, Gopher baseball was picked to finish 5th in this year's preseason poll. But let's take a look at this year's squad.

The 2012 lineup finished in the middle of the Big Ten pack with a .266 team average but they were next to last in runs scored. Considering they led the Big Ten in fielding and were second in pitching, scoring runs was clearly the issue holding the Gophers back from winning. But coach, John Anderson returns most of his top hitters from a year ago so this year's lineup in hopes of a bounceback year for the Gophers.

1. Andy Henkemeyer - LF - Senior outfielder from Sauk Rapids and typically is batting leadoff. Henkemeyer made 35 starts as a sophomore and 50 as a junior (out of 56 games). He was the team MVP and 3rd team All Big Ten last year after hitting .314 and primarily hitting leadoff or second in the order. Not a blazing, base-stealer but he gets on base at a higher clip than the rest of the team.

2. Troy Larson - CF - Another experienced outfielder at the top of the lineup. Larson is a senior from Hill Murray who started 29 games as a sophomore and 37 last year as a junior. On top of being a versatile and high quality outfielder for the Gophers, Larson is also rather academic. He holds one of the top GPAs in the pool of Gopher student-athletes and is majoring in genetics, cell biology & development biological science and will be going to medical school! Larson will also start in LF at times with Jake Bergren starting in center. Bergren is a sophomore who also is an on-base kind of guy at the plate.

3. Dan Olinger - 1B - A junior who led the team in hitting last year with a .318 average and also led the team with 34 RBIs. Olinger started 54 games as a sophomore and 23 as a redshirt freshman, so he adds more experience to the top of Anderson's lineup. In the first 15 games of 2013 Olinger is batting just .260 but he leads the team with 10 RBIs.

4. Matt Holloran - C - As a sophomore last year, Holloran earned 3rd team All-Big Ten honors after hitting .307. The junior from Eden Prairie is the team's primary catcher getting 8 starts this year and appearing in 11 games. When Holloran is not behing the plate you will see Kurt Schlangen wearing the catcher's gear. Schlangen is a versatile kid from Albany who started at five different positions last year, and has made 9 starts already this year.

5. Michael Handel - SS - A sophomore from Wisconsin (thanks Badgers for not having a baseball program), Handel started 42 games as a freshman, earned All-Big Ten Freshman team honors and has quickly become a core piece of the Gopher baseball team. This year he is the only Gopher to start all 15 games, is hitting .321 and has one of the team's two home runs. Handel is also a very good defensive player.

7. Ryan Abrahamson - 3B - Filling the shoes of Kyle Geason, who was the starting fixture at 3B for the past four seasons. Abrahamson got 29 starts last year, primarily at 1B and has started 14 games this year, mostly at third. He is hitting just .237

8 - J.T. Canakes & Alex LaShomb- DH - Nobody really owns the DH spot in the lineup. Canakes has 8 total starts (not necessarily all at DH, but I'm not going through every single box score) and 29 at bats. He is a senior from Eden Prairie and he appeared in 23 games in 2012. LaShomb is a junior from Simley who is in his first year with the Gophers as a JUCO transfer. He also plays 1B with 5 starts and 17 at bats this year.

9. Tony Skjefte & Connor Schaefbauer - 2B - This is the youthful position on the team. Skjefte is a sophomore from Eden Prairie who started 26 games last year hitting just .192. He has started in 7 of the 15 games this year (appearing in 13). Schaefbauer is a true freshman out of South Dakota. He has started 8 games and is hitting .320 in 25 at bats. You might see these young guys doing the RHP/LHP platoon unless one of them locks down the job.

Dan Motl is also seeing action for the Gophers, starting 6 games and appearing in 10 but he has just 14 total at bats. He is a true freshman out of Burnsville and primarily plays in the outfield.

There you have the 14 guys who are getting the vast majority of at bats. This is a pretty experienced group and much is returning from last year's lineup. But as mentioned, last year's lineup was rather punchless and needs to be more threatening at the plate. 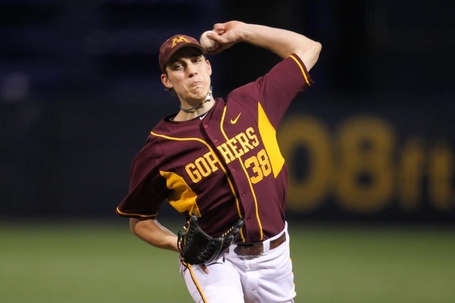 Tom Windle - SP - (pictured right from GopherSports.com) this is your Friday picture and he is one of the best in the Big Ten. He has a no-hitter on his resume now as well as pitching great in a win against what was then the #2 team in the country, UCLA. Windle has a 1.96 ERA this year, 2-1 record in four starts and opponents are hitting just .188 against the 6-4 left from Osseo. Windle was a key member of the bullpen last season and is having a great season as a starter in 2013.

Ben Meyer - SP - Saturday's starter in a typical weekend series, Meyer is a 6-5 sophomore from Totino-Grace. He was an All-Big Ten Freshman last year appearing in 15 games and sporting a 2.37 ERA. This year Meyer is 2-2 with a 2.92 ERA but he gave up 5 of his 8 earned runs in a blowout loss to #2 UCLA. He has 15 strikeouts to 1 walk in the early goings and is answering one of the questions about starting pitching that we had at the start of the season.

Jordan Jess - SP - When projected Friday (or Saturday) starter DJ Snelton went down with an injury, Jess was the next man up to be the Sunday starter. But the lefty sophomore from Wisconsin, who made five starts as a freshman, has struggled a bit this season. In Jess's four starts he has a 5.82 ERA with 11 earned runs (six of which were against UCLA).

DJ Snelton - SP - started 13 games last year and was projected to be probably the Saturday starter. Snelton went down with an injury and is expected to be back around the time of the Big Ten season. He is a 6-7 lefty from Illinois and pitched 86 innings for the Gophers last year mostly as the Saturday starter in the Big Ten season. A healthy Snelton would dramatically help the Gophers in their quest for the program's 23rd Big Ten title. When he returns, expect Snelton to be the Sunday starter with a right-hander on Saturday.

Alec Crawford - SP - a JUCO transfer who was a NJCAA first team All-American last year for Des Moines Area Community College. He had a 12-1 record with a 2.33 ERA last year and was projected to be in the Gopher starting rotation this year before the injury bug bit the right hander. I do not know the nature of the injury nor do I know of his timetable to return (maybe a commenter who is aware of the situation?). More pitching depth would be a huge boost.

Billy Soule - CLOSER - Soule was a key member of the bullpen last season and the senior from Wayzata has five saves in six appearances this year with a 0.96 ERA this year. Pitched 51 innings as a freshman, 38 as a sophomore and 25 last year as a junior.

Kyle O'Shea - SP/RP - Junior lefty from Blaine (Centennial HS) who has been 3 starts as the team's mid-week starter. He made 10 appearances last year out of the bullpen and will be a versatile pitcher for the Gophers this year. He has a 2.84 ERA and opponents are hitting just .191 against him but to be fair he has spent most of his innings against Hamline and Western Michigan.

Lance Thonvold - RP - getting the most innings out the bullpen, is the redshirt freshman from Eden Prairie. Thonvold saw action early as a true freshman but was injured for the season and ended up redshirting. This year he has a 1.46 ERA in 12.1 inning pitched (4 appearances).

Kevin Kray - RP - led the team with 7 saves last year and this year has been a key cog of the bullpen. Kray is a junior from Osseo and has 8.1 IP this season and 1 save.

Dalton Sawyer - RP - true freshman, LHP from Waconia. Sawyer has 5 appearances and 7 IP on the young season. His 10 Ks in 7 innings leads the team in Ks per inning pitched.

The Gopher staff has some solid numbers thus far, but their schedule (outside of the UCLA series) has been pretty weak. The strength of opponents starts to heat up in the next couple weeks with a trip to Kansas State and Texas at the Metrodome before the Big Ten season gets started.

It should be an interesting season for the Gophers. I think we have come to expect a very good defensive team each year, it looks like solid pitching (especially if Snelton and Crawford are able to come back healthy) and then it all comes down to hitting. Can this experienced lineup start producing runs?

I'd love to see the Gophers earn their 23rd Big Ten title in the 125th year of their program and the first year of their brand new Siebert Field. 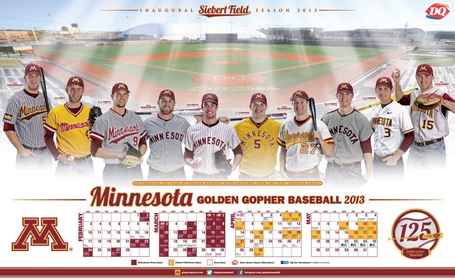