Share All sharing options for: TDG's Big Ten Tournament Preview, Can The Gophers Make a Run?

The Big Ten Tournament is going to be an outstanding four days of basketball and I'm pissed that I won't be there (my own fault, but that is a story for another day). Four teams ranked in the top 10 and Wisconsin is a fifth team still ranked. Minnesota and Illinois were both top 10 teams at one point and you have a conference tournament with 6 or 7 (or 8) teams who could be cutting down the nets on Sunday.

The battle of teams who both should be disappointed in their finish/seed. This should be an intriguing matchup of two teams who both have huge wins on their resume, beat each other in the opposing arena, both play better when the tempo is above Big Ten standards, both are riding 2-game losing streaks and both could really use a win to boost their confidence (and seeding) as they head into the NCAA Tournament.

What do I think? Well, I think that a neutral floor and a B1G stage with bright lights is good for the Gophers. I am thankful that they will not be playing another true road game this year because I wouldn't be able to watch it. I also think that Trevor Mbakwe has been playing his best basketball of the year over the last couple weeks, while Rodney Williams is playing his worst.

The Gopher offense has statistically been trending in a positive direction over their last four games (yes, even the road losses to Nebraska and Purdue). Their points per possession is up, turnovers are down, offensive rebounding is also up and effective FG% is up. Below are a couple charts to illustrate some offensive improvement. 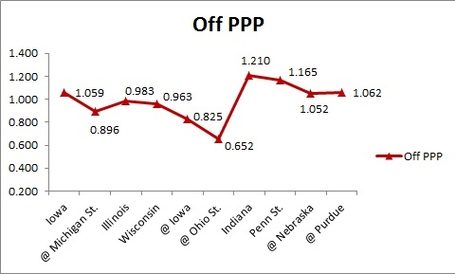 Below you'll see that turnovers have also come down in the previous 4 games. For this state the magic line is 20%, which we have stayed below in recent games.

Clearly these stats do not define everything and should only be taken in the context that offensively we've been playing slightly better than we were for the month of February, and most of the Big Ten season. But I'm looking for something encouraging here. Scoring is more efficient, possessions are taken care of and rebounding has been better. Based on those number, based on how I like how Mbakwe has been playing lately and based on the belief that these are the types of moments when Andre Hollins likes to have big games, I'm picking the Gophers (and based on the fact that I'm a homer).

Illinois is athletic and they could run us out of the gym if they are shooting well. But Mbakwe has been focused and he will dominate the paint, the Gophers just can't get killed on the perimeter.

It wasn't very long ago that Penn State upset Michigan, ruining the Wolverine's chances at a Big Ten title and giving themselves their first Big Ten win in 15 tries.

I'm not going to spend very much time on this match-up because I think Michigan will dominate. Penn State is playing much better now than they were for the first 4 months of the season but Michigan is just too good and they won't get caught off guard again.

In fact Michigan is my pick to win this tourney. This Penn State game will not be too taxing, then they get Wisconsin. Their only match-up against Wisconsin was an OT loss in Madison, they'll get the best of Bo Ryan on the neutral floor. For a team that "fell" to the 5th seed, Michigan has a pretty good draw.

I'd like to pick an upset here, but after recently seeing both of these teams beat the Gophers, I was much more impressed with Purdue. This might be an ugly game with a lot of fouls as both teams are known more for their defensive abilities than having prolific offenses.

Overall I really like Purdue and they have a pucher's chance of knocking off Ohio State in the 2nd round too. This young team is getting better at the right time. They will beat Nebraska by 10+ and give Ohio State a run for their money, potentially beating them.

This game does nothing for me from an entertainment standpoint. Iowa is trending the right way at the right time of year and they are playing for a chance to get themselves on to and maybe on the right side of the bubble. It will take at least a run to the title game but this team is 6-2 in their last 8 games. Against Northwestern they are 2-0 including a 20-point win in Evanston.

This one should be all Iowa.

I've been rather impressed with the Hawkeyes and Fran McCaffery has done more with less better than anybody else in the conference. Unfortunately for Hawkeye fans I think they fall to Michigan State in round 2, but it was a good run for them and they may be dangerous in the NIT.

Michigan will beat Wisconsin - Bo Ryan is David Copperfield this season but Michigan is a bad draw for the Badgers. Wolverines were once a favorite to win the regular season title, they'll be out to prove this 5-seed business is embarrassing.

Michigan State will beat Iowa - MSU is just too good in tournament settings and Iowa might make this a game but my money would be on Tom Izzo and the Spartans.

Purdue will beat Ohio State - maybe I'm too high on Purdue after watching them dismantle the Gophers but I think they are playing well and they can beat the Buckeyes. I could be way wrong on this one and OSU routes them by 18, but I'll pick one major upset in this weekend's tourney.

Michigan will beat Indiana - huge win by the Hoosiers last week to lock up the outright title, this game will mean more to Michigan than it will to Indiana. With the offensive firepower of Michigan, if they can get on a little bit of a roll they benefit from playing all these games in a row.

Michigan State will beat Purdue - I just don't bet against Tom Izzo against a less talented and inexperienced team like Purdue. No disrespect to Purdue, but the Spartans are more talented this year and won't be intimidated by the Boilermaker's physical defense.

Michigan will beat Michigan State - I just have a feeling that this is the team that will be on a mission to win it. Conference tournaments are best for teams with something to prove and for teams trying to get themselves into the NCAA Tournament. Michigan cares more about the conference tournament title after falling so far in the final standings/seeding.

There you have my brief overview. I'll be covering the rest of the Tournament through the eyes of a Gopher fan, but those are my thoughts on how things will shake out.