Expanding a bit on GN's last post plus game details.

Share All sharing options for: Minnesota Gopher Basketball - UCLA Game At A Glance

GN already covered some of this in his post Selection Sunday story, but I wanted to fill in some of the details about Friday's game, links to ticket info, etc.

For student season ticket holders: Student season ticket holders are eligible to purchase one ticket by ordering over the phone or in person at Mariucci arena. Tickets will be available from 9:00am until 12:00pm and they will be sold on a first-come, first-served basis so it is important to call at the beginning of the allotted time frame. Students will be notified via email if the tickets sell out. Students must have a vaild U of M Student ID to pick up their tickets.

- This will be the 7th meeting between the two teams. The last time we faced the Bruins was 1997, when the Gophers beat UCLA in the Elite Eight.

- As is famously noted, legendary coach John Wooden took the UCLA job after a job offer call from Minnesota was delayed by a snowstorm.

- This is Minnesota's ninth official NCAA Tournament berth (13th if you count the vacated Clem berths) and the third trip under Tubby Smith.

- This is the 11 billionth NCAA trip for UCLA, but only the first since 2010. It is the 7th NCAA berth for the Bruins under Ben Howland. 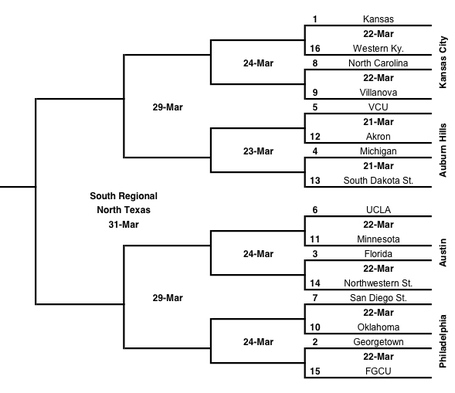