Yesterday morning I had the opportunity to attend the Patty Kazmaier Memorial Award ceremony at the McNamara Alumni Center at the U. For someone who's interaction with women's hockey has been limited to cheering for the Gophers from afar until now, it was a wonderful event. The Patty Kaz award ceremony is as much a celebration of women's hockey and college hockey as it is a celebration of the nation's best women's college hockey player. So it was a great event for me, a women's hockey rube for all intents and purposes, as it gave me the opportunity to better understand the history of women's hockey at the college level.

I suspect I'm not alone, but growing up in Minnesota the presence of women's hockey in the sporting landscape just feels normal. My high school had women's hockey, the U had it, and while it doesn't dominate the sporting news landscape a sports fanatic like me is always going to be hearing about it. Moving to Wisconsin did change things, as the UW also has a good program. So it was interesting to hear about how much the sport has grown in the years since the Patty Kaz award was created in 1998.

This was a historic year for the Patty Kaz, as all three finalists came from a single school for the first time. That's another record for this year's Gopher team has broken, as junior forward Amanda Kessel, senior goaltender Noora Raty, and senior defenseman Megan Bozek made up the three finalists. One of the questions I'd been asking other media members this weekend was which Gopher did they think would win the Patty Kaz and why? I'd have to say that the sense I got from most folks was that they thought Noora Raty deserved to win but that Amanda Kessel would win, for reasons similar to why QB's and RB's dominate the Heisman trophy awards over defensive players. Everyone could agree that any one of the three would be deserving winners though.

In the end though, the recipient of this season's Patty Kazmaier Memorial Award was point scoring phenom Amanda Kessel. She becomes just the second Gopher to win the award (the other was Krissy Wendell in 2005). 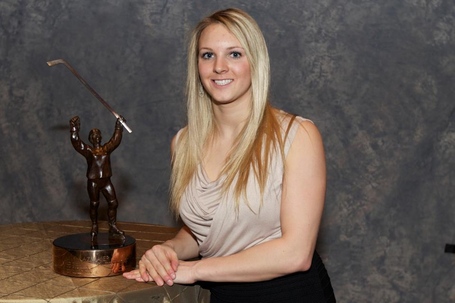 It was an exciting moment for Amanda and her Gopher teammates, but the work is not yet done. They face a tough BU Terriers team this afternoon in the NCAA Championship game. At stake? A repeat national title, the first undefeated season in women's college hockey and the first in all of college hockey since the Cornell men went 29-0 in 1970.

If you want to catch the women live at Ridder Arena be ready to shell out some cash. Otherwise you can catch the game live on the NCAA's feed, chat about it in our National Title Open Thread (opens at 2pm, puck drops at 3pm), or catch my updates on Twitter by following @GoAUpher.

So a big congrats to Amanda Kessel. Hats Off to you and and your team, good luck today, and here's to finishing strong in front of your family, friends, and fans!