The Monday Perspective - Are The Gophers Back?

Share All sharing options for: The Monday Perspective - Are The Gophers Back?

Last week was a pretty good week for Gopher basketball. Just when you thought we were at our absolute lowest and the season was slowly wasting away into nothing...they win a couple games in a row and TOTALLY REDEEMED THEMSELVES!

So the question is...are the Gophers "back"?

It has been a crazy ride for Gopher fans this year. A slow and stead rise of expectations throughout the non-conference season that was bolstered by wins over teams in the ACC, Pac-12, Conference USA and what felt like a strong showing against Duke. Then the Big Ten season hit and the Gophers continued playing beyond expectations with a win over Michigan State, an 18-point win over Northwestern and then a road win over Illinois. NOW we were flying high, maybe a little too close to the sun. Losses to Indiana and Michigan didn't damper our spirits too much before the bottom fell out. A couple home wins and a big win over Wisconsin kept the season afloat before back-to-back 20 point losses took us to the pit of despair. 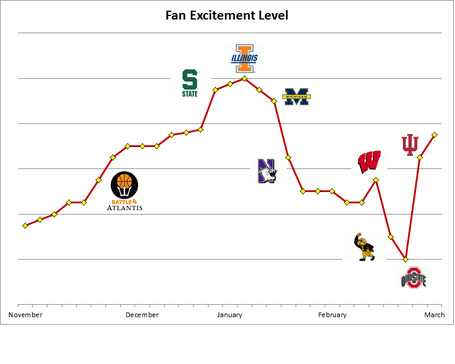 But just when you thought the season was over and an NCAA Tournament bid went from a sure thing to probably having our bubble burst, we went out and started playing like that December team again. We went to play Indiana at what was the peak of our season, which started a negative trend. Then at our absolute worst we hosted Indiana and potentially turned our season around.

Taking the pulse of our season now, I am starting to believe that the team we are seeing is the one we should expect to see the rest of the way. Why? Well let me tell you.

Trevor Mbakwe is back to playing like Trevor Mbakwe. His tenacity and physicality has been largely missing this season. But the way he played against Cody Zeller and then how he followed that up with a strong performance against Penn State, I believe that he is ready to lead this team again. A confident and aggressive Mbakwe gives us the Gophers a legit scoring option inside and he dramatically helps secure defensive rebounds (ending opponent possessions). Both of these are critical to the Gophers operating more efficiently on both ends of the floor.

But this isn't all on Trevor. The Gophers, as a team, are playing with renewed enthusiasm and confidence. They appear to be having fun and the confidence they are exuding is the one that gets them through difficult times, allowing them to battle back and finish off teams. This is the team that ended the Michigan State game on a 22-4 run. This is the team that put a beat-down on Illinois. And this is the team that made a ferocious comeback on Indiana after a bad stretch in the first half.

But this isn't just about the players, the coaching staff is making adjustments. The offense is operating a little differently due to some tweaks and adjustments by the coaching staff. Hard to believe, I know. The bench has been shortened to fewer players who are getting slightly longer leashes. The last couple games we have received contributions from Mav, Eliason and Welch. Getting those guys to contribute will help immensely come Tourney time.

Once again I like the direction this team is headed but I urge you not to get carried away with expectations again. I feel as though everyone is once again confident in this team and nothing but a 2-0 finish will be acceptable. To be honest, losing at Purdue would not be the most surprising thing in the world and if it happens it will not be the end of the season (again). It is not a must-win and we should give Purdue their due respect. The Boilermakers are a young but talented team with a few nice wins on their resume. A top-tier team they are not, but they absolutely are a team capable of beating a good team on their home floor.

Getting two more wins would really give this team a ton of momentum into the post-season, but it isn't necessary. Stay confident, keep Mbakwe engaged and this team is still capable of winning in the NCAA Tournament. I've been saying it all year, though my confidence may have wavered at the end of February, this team is capable of getting to the Sweet 16. They are a top 20 caliber team, they are not a top 10 caliber team. Hopefully we win our last two games and that ugly stretch in February can be chalked up as just a batch stretch. A blip on an otherwise successful season.