Share All sharing options for: Golden Nugz - 4.25.13 - Less Insipidly Named than the Playoffs!

- If you've listened to Jerry Kill for any length of time (which, no doubt, most all of you have), you know the one thing he demands out of his football team is toughness. Slightly less generic (though not by much), this concept manifests itself through how physical his team plays.

With that in mind, Chip Scoggins is convinced the Gophers have built off the gruff performance put on display at the Meineke Car Care Bowl (where the above pictured Zac Epping received consecutive personal foul penalties after driving Rad Raider pukes into the Reliant Stadium turf) and have turned the corner by no longer playing like mice.

"When we walked off the field, I turned to [an assistant] coach and said, ‘This is who we want to be,’" Kill said. "I said this is the first time since I’ve been at the University of Minnesota that I feel like we were physical."

I feel like I've heard this statement before. Where?

I can tell you there aren’t many programs in college football that have gone full pads on Tuesday and Wednesday for the last 4-5 weeks, but I do think it’s made a difference in our football team. I think we’ve tackled better, we’ve blocked better, we’ve been more physical. I think that’s helped us, and our kids’ attitude. Our kids have come to practice every week, even when we’ve been beat, they come to work, they don’t complain, and we just keep pushing forward. ... The first half was as good of football that we’ve played since I’ve been here, what I’m used to. I’m excited, I’ll be honest with you. That’s what Coach Kill is used to, a physical, hard-nosed football team that can run the ball and play defense.

So, is that typical hyperbolic coach speak, or pattern recognition of when the team actually played well against a defense not comprised of bloated corpse-meats? Does it really matter so long as Kill proselytizes this group into one that believes they're tuff enuff to be a factor in the B1G? The latter is all I care about.

- Playing off that run/smash/3 yards and dust/brawn/walrusball/toughness meme, the staff understands the key for the offense in 2013 is to capitalize on opposing defenders cheating up and testing their virility against the Maryland-I by hitting play action over the top. Having typed all that out, expect to see nothing but vanilla inside zone runs and hitch routes this Saturday unless Kill whimsically lets Chris Streveler attempt 20 passes to walk-ons.

On a geekier note, I get a number chub at the continued (implicit) references by this staff to Football Study Hall's success rate (and leverage rate) while discussing their offensive goals :

Offensive coordinator Matt Limegrover said the offense’s priority is to gain at least five yards on first down.

Yes, this is typically referred to as "keeping ahead of the chains" by non-pocket protector types. I'll go back to watching Star Trek TNG re-runs now.

- This is, um, sort of terrifying with respect to our linebacking corps:

So Hill’s spot, and the middle spot aren’t the main concern. It’s the other linebacker spot where the Gophers still need help. Senior James Manuel, a converted safety, has been playing there with the first-team defense.

"He needs to be more consistent," Miller said. "He’s one of those that I’m referring to."

And the same goes for Lamonte Edwards, a converted running back from Woodbury.

"He’s made some [plays], and he hasn’t made some," Miller said. "And that’s that consistency part we’re talking about."

FFFFFFFFFFFFF. 13 practices in, still no more clarity around who will step up at weakside backer and ostensibly whether they'll be up to the task.

- WWLbrogdump for today. Rittenbro feels the Gophers are still a year away, while the novel solution to the 13 scheduled to fit 12 actual games scenario of 2016 is to just drop our FCS opponent, regardless of whether doing so would ensure Minnesota ends up playing 6 road games. Good plan.

- Ya like gahwds? Oh, I'm sorry, "guards." Anywho, Andre Hollins is listed by Yarina as a "near-elite" B1G guard returning for 2013-14. I'm sure Brent will correct his blasphemous oversight and put Dre where he belongs. I mean, I'm sure he understands he erred by selecting a dude who didn't play but four games last year or a GODFORSAKENHAWKEYE ahead of him.

- Why don't you just throat punch us next time Izzo, instead of just taking every damn recruit the Gophers wanted?

- @zipsofakron reviews the season that was over at From the Barn.

- After Stephen Bench got the hint, he opted to transfer rather than abdicate the starting QB job to a hotshot true freshman. Meanwhile, Penn State's quarterbacking depth chart -especially the ones who've attempted a pass- looks like this:

- This headline is not fake: Brady Hoke promises free donuts to Michigan students. 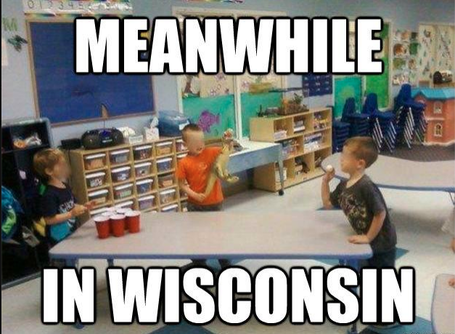 - After prophesying the Death of the BCS, Dan Wetzel comes to the rather ironic conclusion that the milquetoast nature of the college football playoff naming (COLLEGE FOOTBALL PLAYOFF®©™) was by nefarious design. I'm sure Bill Hancock looked at every other sport, noticed that none of them elaborate on their post-season descriptives beyond attaching "playoffs" to the end and called it a day. True, there's no mention of the NCAA, though why would you willingly associate yourself with an organization so shitty? Oh wait.

Now that it's settled, here is your rotating CFBP site lineup: Rose, Sugar, Orange, Cotton, Fiesta and Chick-Fil-A Peach. That's right, CFA is rebranding their bowl back to its original name, as God intended. Also of note, no Northern or cold weather bowl sites as of yet.

- Claiming you got hacked is the thing to do this week, so the newly minted and blandly named collegefootballplayoff.com took to Facebook in hopes of rooting out any Internet tomfoolery. An Austin man breaching your security to vote for Logo #4 fifty thousand times? Likely story -- except I don't see any references to RG3 getting recruited as a safety so I'M NOT BUYING IT #sheeple. Occum's Razor: a groundswell of Mariners fans wanted to put their stamp of college football. Or somebody with an obsession with ninja stars failed a Rorschach test.

- Rutgers: personifying what it means to be New Jersey, forever and always.

- Bob Davie got a contract extension LOLWUT no really, he did!