The Gophers sit atop the table in the B1G and this weekend's series is critical in continuing their run for a title.

Important caveat before I start. I'm not a big Gopher baseball mind. So this preview won't a ton of original in depth analysis from me. You've been warned! 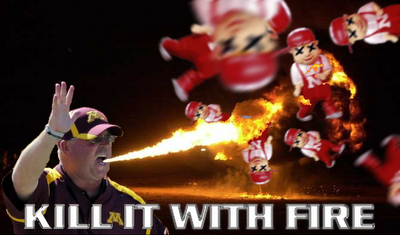 As I said, I'm not a big Gopher baseball guy so my thoughts are simple...it's awesome to see the Gophers in first this late in the year! With all of their remaining B1G games at home and the conference tourney being held at Target Field the opening is there for the Gophers to get on a big run headed into the NCAA's. Let's get it done!

If you're looking for something to do this weekend there is no reason not to make it a Gopher baseball game. The weather forecasts for all 3 days are perfect for catching some baseball. The Huskers are 21-25 overall, 12-6 in the Big Ten. They are coming off a tough series with a powerhouse Indiana squad, having lost 2 of 3.

FIVE TEAMS, FIVE SERIES WINS
Minnesota has won its first five Big Ten contested series this year. The last time Minnesota has opened the Big Ten Conference season with five series wins dates back to 2001 and the first since moving to the three-game series format. In 2001, Minnesota opened with wins against Purdue, Indiana, Michigan State, Michigan and Iowa. This year the Golden Gophers won two of three against Michigan, Ohio State, Iowa and Penn State, while they swept Northwestern. Of the five series wins, four came on the road, with the only exception winning two of three against Ohio State.

DID YOU KNOW?
Minnesota's weekend pitching rotation has combined for a 13-3 record this year in Tom Windle, Alec Crawford and DJ Snelten. The trio leads some statistical categories within Big Ten play. While only starting games within Big Ten play, the trio all rank in the league's top 10 ERA (Big Ten games only). Windle has started in five league games and holds a 2.16 ERA in league action, while Snelten sits at 1.87. Crawford ranks seventh with a 2.22 Big Ten ERA. The Gophers are the only weekend starting rotation to have all three listed in the top 10 opposing batting average as well. Snelten ranks second in opposing batting average, holding his opponents to a .198 average, while Windle is third at .203 and Crawford is ninth at .230. Due to the shortened start against Ohio State and the lost start against Michigan State, Tom Windle still ranks second in the league in strikeouts (37), nine behind Northwestern's Luke Farrell (46).

GOPHERS IN THE LAST TWO BIG TEN SERIES
Although the Gophers as a team are hitting .265, they are hitting .277 in conference action. In fact, in the last two series against Iowa and Penn State, Minnesota has hit .332 and pushed across 49 runs and allowed just 26. In those two series, Kurt Schlangen has hit .435, while Troy Larson hit .421. Connor Schaefbauer has hit .350, while holding an on-base percentage of .519 in that span.

Nebraska enters the Minnesota series with a 21-25 overall record and a 12-6 mark in the Big Ten, after falling in two of three to Indiana last weekend. The Huskers boast one of the best hitting teams in the Big Ten. In overall action, Nebraska has hit .282 as a team, but in Big Ten Conference season, its hitting a league-best .335. Chad Christensen ranks fourth overall in all-game batting average (.380) and is hitting .487 in Big Ten competition, a conference best. He also ranks first in Big Ten games in runs scored (24), hits (37) and on-base percentage (.539). Michael Pritchard is hitting .380 in Big Ten games, while Rich Sanguinetti and Pat Kelly are hitting .360. Scheduled to start of Friday is Christian DeLeon, who has started 12 games this year and holds a .378 ERA with a team-best 40 strikeouts and 78.1 innings pitched. Saturday's starter Kyle Kubat has started in four games and holds a 1.75 ERA, while Sunday starter Aaron Bummer enters the Minnesota series with a 3.38 ERA, 13 appearances and 29.1 innings pitched.

Picked to finish fifth in the conference in the preseason poll by the league coaches, the Minnesota Golden Gophers enter the weekend sitting in first place with two weeks to go.

In conference play, the Gophers have played just one league series at home this season, as they took 2-of-3 from Ohio State at Siebert Field.

Offensively, the Gophers are hitting .265 overall on the year and have been a bit better in 15 league games with a .277 average.

The Gophers have four players hitting over .300 on the year, including Andy Henkemeyer, who leads the team with a .321 average and a team-high 24 RBIs.

Henkemeyer is also tied with Ryan Abrahamson for the team lead in doubles, 12, and is tied with Mark Tatera for the lead in triples, 3.

Abrahamson and Michael Handel are the only players on the team with more than one home run. As a team the Gophers have nine homers, with Abrahamson hitting three and Handel adding two.

Defensively the Gophers are fairly solid behind their pitchers with a .971 fielding percentage. They’ve committed just over an error a game with 50 errors on the year.

The Gophers success this year has been because of its pitching. Minnesota ranks second in the Big Ten with a overall ERA of 2.78. The Gophers staff has been just as good during league play with a 2.79 ERA.

The STrib has a profile on freshman leadoff hitter Connor Schaefbauer and a look at where the Gophers stand as they enter the homestretch. The Daily has a profile of junior ace Tom Widdle and recaps of their most recent game (a loss to UW-M) and of their last B1G series versus Penn State.

Gophers win 2 of 3. With Indiana winning 3 of 3 in their series with Northwestern this leaves Minnesota tied for first with the Hoosiers as they enter their final series against Illinois.