Share All sharing options for: Big Ten Tournament Border Battle - Gopher and Badger Softball Face Off For The Title 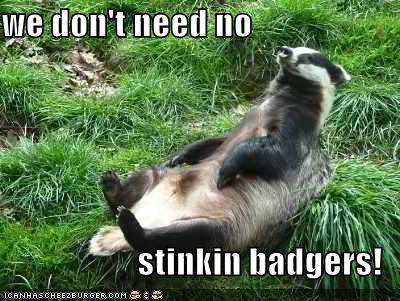 Looking for the chance to cheer a Minnesota team on to victory versus a team representing a school whose mascot is Skunkus Popcornus Crapulus? Then you'll A) need to already be in Lincoln, Nebraska or B) turn on the Big Ten Network at 12pm CST. If you are/do, you'll have the chance to watch the #3 seeded Minnesota Gopher Softball team take on the #4 seeded Wisconsin Badger softball team in the Big Ten Softball Tournament title game.

How Did They Get Here?

Junior Sara Moulton threw her second complete game shutout in as many days, and Kari Dorle's one-out line drive single off the wall in left center drove in the game's lone run in the bottom of the sixth, as Minnesota advanced to the Big Ten Tournament title game with a 1-0 win against Nebraska at Bowlin Stadium.

Moulton improved her record to 31-9 on the season by allowing just four hits and striking out five. It was her second consecutive complete game shutout, as she picked up the win in Minnesota's 4-0 win against Indiana on Friday.

The biggest threat for the Huskers came during the top of the sixth, when they were able to string together three straight singles to load the bases with one out against Moulton. But she got Taylor Edwards to strike out on a changeup in the dirt and cleanup hitter Brooke Thomason grounded out to first to end the threat.

A leadoff double by Mary Massei set the tone for the day and a double by Whitney Massey scored the first run. A single and a walk loaded the bases, setting up a crucial pinch hit situation for Macy Oswald. Oswald drew a walk and the Badgers took a 2-0 lead.

With the table set, Stefanni LaJeunesse stepped into the batter’s box for her biggest pinch hit at bat of the season. With a 2-2 count, LaJeunesse launched a ball over the left center field fence to put Wisconsin up 6-0.