Who needs a fortune teller when you've got HKS Sports?

Share All sharing options for: Minnesota Gopher Baseball - The New Vikings Stadium Designers Are Oracles Into The Program's Future

By now all the hoopla surrounding the Minnesota Vikings new stadium announcement has settled down. Lots of folks have written about why they love it, why they hate it, or why they don't care. Media outlets across Minnesota and the country have breathlessly reported all the details and added to the hype. And through all of this I have not heard a single media outlet talk about the single biggest storyline to come out of this whole stadium reveal...HKS Sports is staffed by individuals who can see into the future. I repeat, HKS SPORTS CAN FORSEE THE FATE OF GOPHER BASEBALL BEFORE IT EVEN HAPPENS!

My sources (who are way better than the ones who told me that Rex Burkhead's mom was dancing on a table) are reporting that HKS has assembled a team of fortune tellers and wizards to see into the beyond. And what they've found is that in the year 2019, Gopher baseball will be regularly selling out the new Vikings Stadium as they come off their 5th straight national title.

But why would HKS go to all that trouble just to let Gopher baseball fans know how awesome the program will be in the future? And why would such earth shattering news go unremarked upon in the media? I've puzzled it out, and the only reason (that makes any sense) is that there is a giant conspiracy between the founders of HKS, the fortune tellers/wizards, the heads of all the media conglomerates (perhaps even SB Nation?), and the crab people to keep all this quiet. I've diagrammed it all with this handy chart: 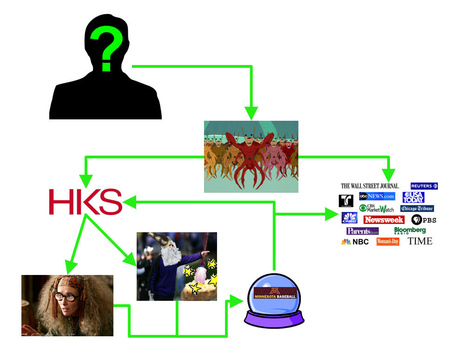 The only thing I'm missing is who the overall leader is and why they'd try to stop us all from knowing about what's about to happen. All I know is that this is the only thing that makes sense. I mean, it couldn't just be that HKS overestimated the attendance of an indoor Gopher baseball game by like 55,000 people. No, that's far too easy of an explanation. Wake up sheeple! That's what the mystery person wants you to think!

Don't the renderings of Gophers playing in the new stadium look sweet? That doesn't look like a terrible bad weather home at all. In retrospect, I'm beginning to wonder if I should have led with that thought instead of my completely sane theory about the images...

Oh, and if you're still reading, consider this an open thread. I had better stories in the pipeline but I was worried that the Gremlins in the SB Nation system might eat it before it could post. So you got this instead. Enjoy!