My brain, it's been pondering stuff.

Time to go all random and you can all come along for the ride. Don't want to? Too bad. This is my post and I'll drive it all over the map if I feel like it. And Jobu help you if I have to turn this post around...

Seriously though, I've done my best to organize this but I'm pretty much just typing out my thoughts on all the sports related topics that have caught my eye over the last few days. If you stick it out until the end you'll be rewarded with a bourbon themed idea though. So there's that.

How is it possible for the NCAA to be this stupid?

I seriously don't understand how the NCAA manages to one up itself in terms of asinine and nonsensical rules and rulings. I'm guessing most of you know what's prompting my brain to think this. That's right Twitter fans, the NCAA has banned the use of hashtags on football fields.

That means that this is illegal... 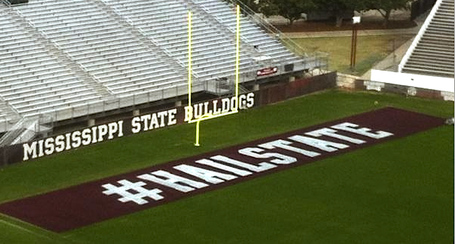 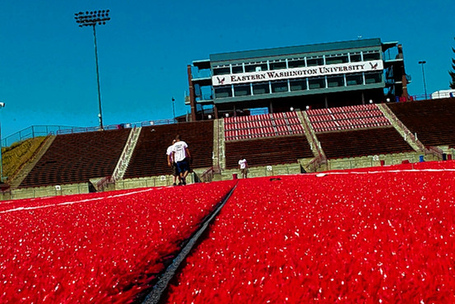 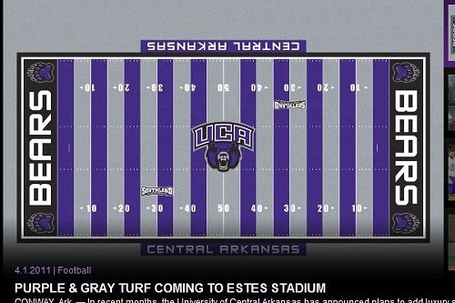 ...are totally kosher. IN WHAT WORLD DOES THAT MAKE SENSE? Oh yes, that's right. In a world where a group of unmitigated a--hats can call cream cheese on a bagel an improper benefit.

And you know who is really getting screwed in this whole deal? Towson. Why you might ask? Because Towson bought a new field turf field last year with, you guessed it, hashtags on it. 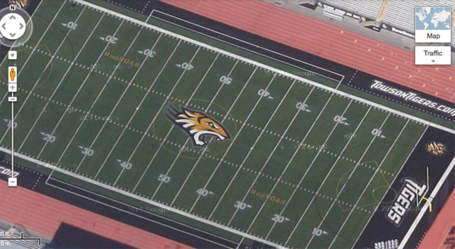 I'm sure this is all stupid enough right? No way it could get any dumber. Well... Go home you pompous gasbags, you're drunk, high, and too stupid to function.

I CAN HAZ BETTER BOAL GAMEZ?

There has been plenty of talk around the interwebs regarding the likelihood of the Big Ten changing it's bowl lineup thanks to some recent comments from Benevolent Overlord Delaney.

The Big Ten's future bowl lineup is starting to come into focus. There will be changes beginning in the 2014 season.

"It could be a lot," Delany told a group of reporters, including yours truly, on Wednesday.

This has spawned speculation about what bowl games might join the B1G's lineup. For example, here is an entry from Mike Hlas' blog in the Iowa City Gazette where he says the best lineup would include dropping the Gator and Heart of Dallas bowls while adding the Holiday and Pinstripe bowls, with perhaps the Kraft Fights Hunger By Spending More On Advertising For Their Bowl Game Then They Do Fighting Hunger bowl. Hmmm...that seems sooooooo familiar. It's almost like a really smart guy I know wrote the exact same thing back in January. Huh. That's your TDG, writing the stories Iowa sportswriters will think of 4 months later.

Anyway, in addition to thinking that Mike Hlas should just have linked to my post and saved himself some time, my brain is really hoping that this whole line of thinking comes to fruition. Like, I really, REALLY want to see some other California bowls in the mix, especially the Holiday Bowl. San Diego is just an absolutely fantastic town to visit.

ALL THE FACILITIES PROJECTS!

The arms race continues! First, Illinois goes and changes the name of Assembly Hall to the State Farm Center. Still no word on if John Groce will be contractually obligated to do the Discount Double Check immediately following every time out. In their defense, State Farm is a local-ish company. On the other hand, they've sold their souls to a company that uses Aaron Rodgers as it's spokesperson. Talk about making a deal with the devil...

In an attempt to overcome their inability to have nice things, Illinois has released plans that make the renovation look suitably impressive. 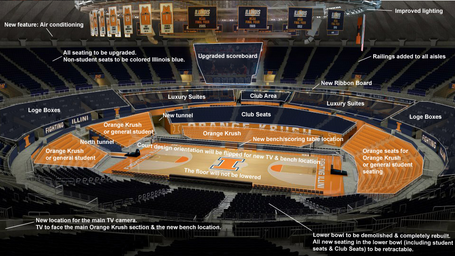 Nice premium seating areas and impressive lobby improvements. However, most notable to me is what they are doing with the student section. Note how they are purposefully putting the students in a position to create noise and distraction from 3 sides of the floor AND are changing the TV camera positions so their students are front and center in every TV shot. Sure beats burying them on one end of the floor and partway under an overhang doesn't it? This is something the U needs to do when Williams is renovated or replaced. I mean, it's something they should do now but we all know that isn't going to happen.

Not to be outdone in the facilities news this week, Texas A&M announced a MASSIVE overhaul of Kyle Field.

Kyle Field will be the biggest stadium in the SEC, per renovation plans revealed to Texas A&M's Board of Regents in a video before a press conference announcing the upgrades. Good Bull Hunting had all the details on the moves that will make the Hate Barn an even more imposing environment for opposing teams, along with images from KBTX's Steve Fullhart's twitter.

The stadium will add at least 20,000 seats to expand to "over 102,000," boasting the largest capacity in the SEC and in the state of Texas. Tennessee's Neyland Stadium seats 102,455 to make it the third largest in college football, so renovated Kyle Field will apparently be slightly bigger than that. It will also be bigger than Texas' Darrell K. Royal Stadium, which "only" seats 100,119, another way for the Aggies to one-up the Longhorns. Of course, capacity isn't much of an issue for Aggies fans, who have crammed as many as 90,000 in Kyle Field's current capacity.

Ok cool. So their going to spend what, $100 million on the reno? (Emphasis below is mine)

The renovations will take place in two phases, beginning in November 2013 and November 2014, with the stadium reopening in August 2015. The $450 million renovation won't see the stadium miss any regular season action. The new Kyle Field will seat 102,500, just about 50 more than Tennessee's Neyland Stadium for the title of biggest in the SEC.

Da fuck? FOUR HUNDRED AND FIFTY MILLION DOLLARS ON A RENOVATION? They are spending more to improve their stadium than the U did to build a fine facility in TCF Bank Stadium. This thing looks like it's going to have insane finishing touches. Are they going to have gold plated toilets for the high rolllers?

After watching that video, I'm actually wondering if they might. That's almost enough to make the die-hard college fan think about what it would be like to be a student at A&M in a few seasons. And then you look around Good Bull Hunting some more and see their (tongue in cheek) campaign to convince Waffle House to open a location in College Station. Side note: quality t-shirt design here: 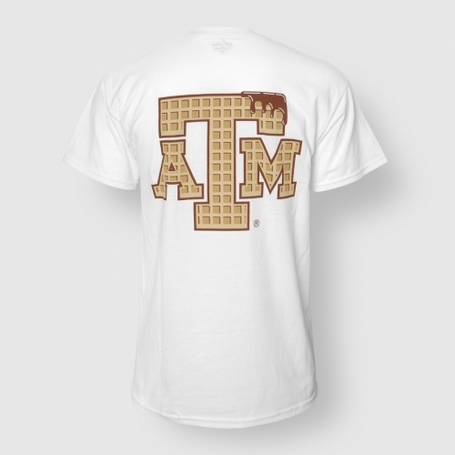 They may be (mostly) joking, but the gravity of this fact should not be ignored. Let this sink in...College Station is such a shithole that THERE ISN'T EVEN A WAFFLE HOUSE THERE. That's right folks. Waffle House, the toothless redneck cousin of Bob Evans, doesn't even want to be there. Is that a place you want to spend your college years? I think not. Also, getting back to the facilities...You know what they say about guys who drive cars that are a little to flashy? Texas A&M, I think you've got some inadequacy issues. THIS IS FACILITIES VIAGRA FOR THE INSECURE SEC NEWBIE EGO.

The facilities fun of this week isn't just for colleges though. The Atlanta Falcons heard about the Kyle Field project and decided they could one up those overall wearing and waffle-less Texans. 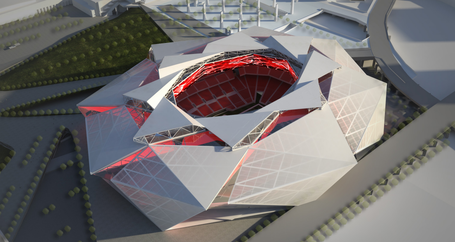 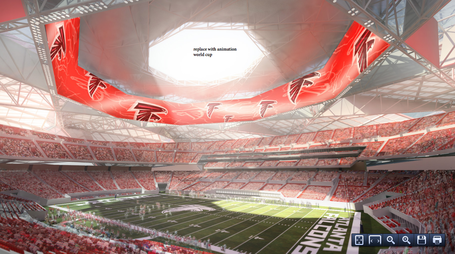 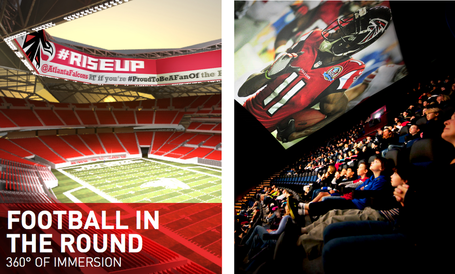 Do any of those photos confuse you? Then watch this video to get the full effect. There is another, more boring, design that takes up the first 40 seconds of the video. Feel free to skip ahead to the AWESOMESAUCE.

Personally, I think it's fantastic! It's unique, it's got a lot of cool (and some completely over the top) potential features. It's not going to be stale, old, or boring in a few years. It's not a worthless copy of Lucas Oil Stadium like the other choice is. It will make whatever tired creation the Vikings come up with look incredibly lame (I don't have high hopes for the design being anything but a retread of boring design decisions already in use).

Seriously, you need to look all the way through this PDF from the design team. You'll either love it or hate it, but I guarantee you'll never have seen anything like it.

Am I a horrible person?

One of the writers for the Dallas Stars SB Nation site has a great piece about how being a Stars fan helped her overcome the social awkwardness and other issues presented by her Asperger Syndrome. It's a really neat story and I think it highlights just how great communities like the one we have here at TDG can be. That said, the whole time I'm reading this I couldn't stop thinking "FUCKING NORM GREEN WHY DON'T YOU GO DIE IN A TIRE FIRE" and other not so nice things. And I barely remember the North Stars from my childhood (and keep in mind this was during the part of my life when I didn't give a crap about hockey). Am I crazy, a horrible person, or is this the normal reaction as a well raised sports loving Minnesotan?

Would anyone be up for some bourbon tasting?

I kind of think a TDG event where we get together and get to taste a bunch of bourbon would be cool. Maybe something that Butcher and Boar could host? I dunno. Could be a little spendy (especially if people bought full servings of some of the samples) but I'd be game. Anyone else find the idea interesting?

I could keep going...

...but at this point it's almost Friday. So I think I'll just stop. Thanks for following me down the rabbit hole. I hope you enjoyed it as much as I did.

As always, feel free to use the comments to tell me I'm crazy. Or, ya know, answer some of the questions I posed. Either way is good. Seriously though, I want to know who'd be down for a TDG bourbon night. So make sure to weigh in on that.