New renderings of an improved indoor practice facility are circulating on Twitter today after being displayed on the TCF Bank Stadium scoreboard for attendees of Coach Kill's football camp.

Every wave hello to some shiny new facilities images!

Designs of proposed practice facility for @gopherfootball and @gophergridiron up on the board before camp. #gophers twitter.com/TCFBankStadium…

It would appear as though the U has completed not just the facilities plan (though that hasn't been formally announced) but also some preview renderings of what the upgraded (or brand new) football practice facility might look like.

The first two images are pretty standard and show an indoor practice facility (IPF) that is similar to the other new ones being build across the conference: 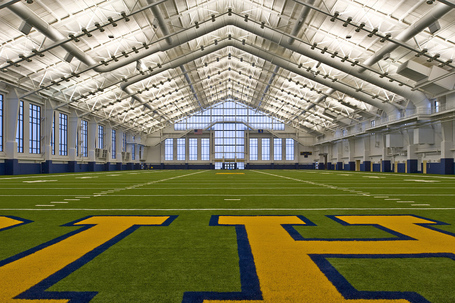 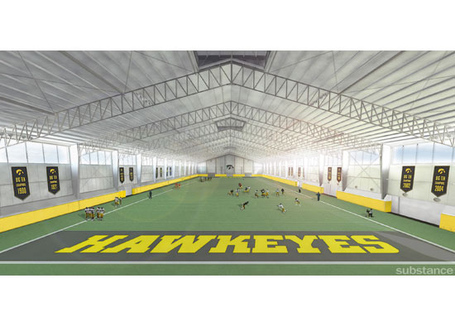 What isn't clear, is whether the image is of a renovated Rod Wallace or an entirely new structure. That question is made even more interesting when you take a closer look at the photo tweeted out by the @TCFBankStadium account: 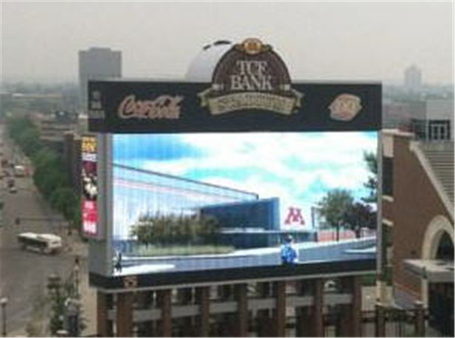 As Matt noted on Twitter, that's a lot of glass on the exterior and is certainly a departure from the current football PF design. Can anyone do a better job of surmising the location of that building (i.e. is it in the current location) from that photo? I can't.

So, what do we know?

- The U wants a brighter, nicer IPF for football. Nothing earth shattering there.

- The early concept drawings have lots of glass on the exterior.

- It isn't even close to paid for yet unless the U is sitting on a big T. Denny check right now.

Everything else (when the facilities plan will be released, the location of the IPF, total projected cost, whether it's a higher priority than a bball PF, etc) is an unknown.

Let the speculation and commenting commence!