Let me start by summing up my reaction to Norwood Teague's facilities presentation to the Board of Regents today in a single GIF:

ED NOTE: We would have also accepted the following:

Moving on to non-GIF related celebration and (more importantly) information...

Teague started by praising the U's student athletes by recapping their academic and athletic successes. He also summarized the department's budget, while being sure to note how it lags behind most of the B1G and Wisconsin in particular. He then went about the process of describing the vision for the athletics facilities.

To open he stressed the following areas:

- Improve our student athlete experience: throughout the presentation Teague spoke at length about how the outdated and cramped facilities the U currently provides forces teams to fight for space to practice, creates a situation where athletes are studying in hallways instead of in an academic center, and where they must keep buckets out in Rod Wallace field 24/7 to deal with leaks in the ceiling.

- Change the future of Gopher Athletics: The plan is designed to make the teams more competitive in recruiting and on the field and as a result, improve revenue and the overall budget. Think "build it and they will come" combined with "a rising tide lifts all boats."

- Attract and retain talented staff: In other words, make it so good coaches want to stay.

- Seamlessly connect athletics facilities to the university and its neighborhoods: This is the "don't go all NIMBY on us neighborhood associations" item

There was a definite theme of "this is a NEED not a WANT" to Teague's proposal. He was constantly highlighting that the U lagged behind other B1G universities and there were multiple anecdotes used to illustrate how the overcrowding of indoor facilities and the age of those facilities hurts the athletes and teams.

Six to eight years and $190 million dollars. That's the overall summary of the Phase 1 plan that Teague unveiled today. If taken to full completion, Phase 1 will include:

The design is to house all of these around the current Bierman athletic building and create a new "Athletics Village". The goal is also to complete the project using only private funds.

Here's a series of screenshots from the presentation. These are conceptual drawings, not the guaranteed final product. (NOTE: All screenshots are from the athletic department's Facebook page. Click for larger image.) 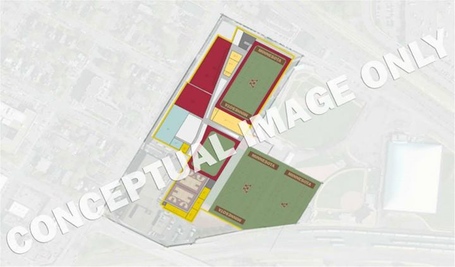 The new Athletics Village will be built around the current Bierman/Nagurski structures. 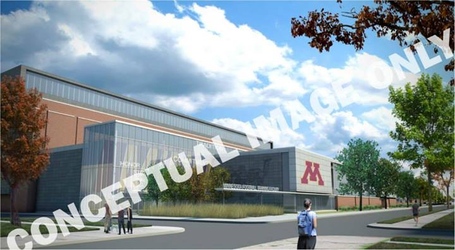 An outdoor look (from the corner of 15th Ave. and 8th Street) at the new football administration building. 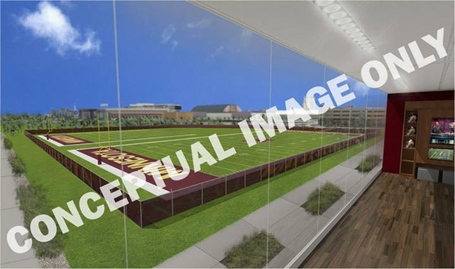 Looks like the football team also gets a touch more practice space on it's second outdoor field. 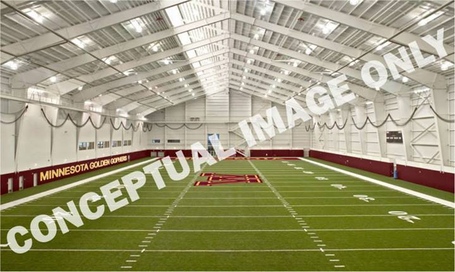 The indoor practice facility concept for football. This is the same image made public during Coach Kill's football camps.

Per Teague, the plan is to give both the men's and women's teams 1.5 practice courts of their own. Their will also be public viewing areas. 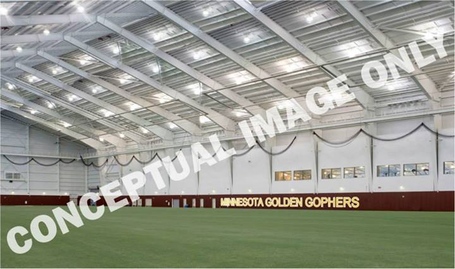 Instead of having to use the football IPF or other spaces, the Olympic sports will get their own dedicated facility. 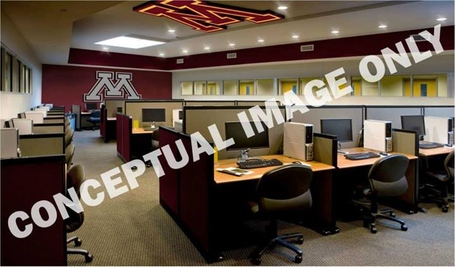 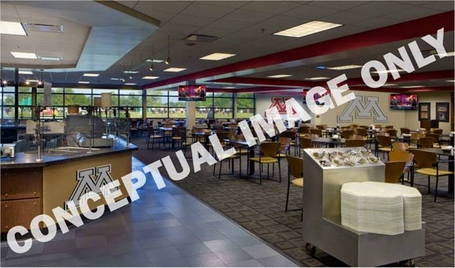 The plan also includes a new training table/nutrition center for all Gopher athletes. Interesting note, it sounds like there is an NCAA rule requiring that these centers be open to the general public for at least 1 meal a day. At other schools professors take advantage of this.

Essentially there's 2 main next steps. Do further assessment of it's is actually feasible to raise $190 MM of private money and actually start raising money. So get your checkbooks ready.

GoAUpher: See the first GIF. I love what Teague, his staff, and Populous have put together. There is a long way to go before any of this becomes reality but I think this is a bold plan and it means that Teague wants to take a much wider approach to this process than I had anticipated. Before we get to the rest of my thoughts I have some random notes from the presentation:

- Teague wouldn't guarantee that the process would be finished in 8 years but said that was their goal.

- There was mention of donors already being on board, but no specifics on amounts or who. Teague declined to give more specifics at the post presentation press conference either.

- It sounds like any renovations to Williams Arena would come in Phase 2.

- Teague hinted that the wrestling facility may already have donors and there was another remark about $8 million available/set aside for Mariucci improvements that I may have dreamed but am pretty sure I heard. It was the only hockey reference I can recall.

- Basketball is supposed to get 1.5 courts per team. That's a slight change from the 1 court per team notes we've heard previously.

- Teague didn't set explicit priorities on what gets built first. Instead he talked about building parts of the plan as the funding is available without going into specifics.

The rest of my thoughts:

- I like the aggressiveness of the proposal. They're aiming big. Nothing is piecemeal and while the design allows them to add things piece by piece to an extent, putting everything in one location forces the issue of getting larger funding to complete the project. The flip side of that is that it means the whole process could stall more easily.

- I love that the Olympic sports get their own IPF. First, it makes selling the plan easier in the realm of internal U politics because more teams than just football and basketball benefit. Additionally, if completed it means that the football team has more control over their complex and don't have to share it with as many groups.

- While I understand the benefits that would exist by moving the football team next to TCF, the idea of an Athletics Village excites me. There is the potential for some cost savings and let's face it, it just makes the most sense given the U's current land situation. Also, see the "we're all in this together" theme from bullet one. It's a great selling point for Teague.

- The Board of Regents sounded supportive of the plan overall. Only 1 regent seemed extremely skeptical while another (Regent Brod) actually called athletics "critical" to the U's image. That one blew my mind.

- I don't see any way this gets fully funded with private money. If Teague pulls that off then he deserves a statue next to the money tree he planted.

- Nebraska's new facilities got name dropped several times. Add this to the trips Teague took down there with T Denny Sanford and it is clear that he liked what he saw and got some ideas.

First, let's state what the Master Facilities Needs Assessment/Plan presented today actually is: a vision. Nothing more, nothing less. These are not schematics or proposals. They are a reflection of A) what the department as a whole needs B) how much it would cost to meet those needs and C) just where Norwood's head is at regarding a new culture of U athletics moving forward.

Second, let's get right down to it: this is also about football and basketball primarily, as they bulk of the new construction primarily benefits the two revenue sports above the non-revenue. Hoops would get their new IPF, as would football, along with some expanded room for offices and additional space for outdoor fields. That a new academic center and Olympic sport IPF are included in the Phase One plans is more to ease the logistics of managing the department's facilities as a whole and make it an easier sell to the Regents and donors.

So, what did we learn today?

- Teague was very coy about which individual pieces are priorities to the Regents and how much money has been raised (more on this in a bit).

Now, the reason why Norwood danced around the "priority construction" is to avoid the problem, as one of the Regents mentioned during the meeting, of fundraising everything piecemeal, though his commentary afterward suggested that certain needs -such as the hoops facility- can begin construction sooner than others.

To do so, the track get bulldozed, as does much of the back parking at Bierman. If this occurs, moving forward on the football facilities are a natural progression, since the new outdoor fields would move to where the current track sits.

About the money raised part. Teague was pretty clever about this too, since if you let (big) donors know how much money has been raised, they may feel inclined to donate less. In fact, as is typical with large capital campaigns, the official fundraising period doesn't begin until several large "seed" pledges are secured.

The main takeaway, for me at least, was how well the Regents seemed to latch on to the idea of moving the entire athletic department forward, and that such a massive investment in facilities for all programs (but mainly just football and basketball) are necessary. The other takeaway? Teague is really banking on the idea that since his vision is now public, he can sell it that much easier than a vague concept of "new facilities."

If what is eventually built comes anywhere close to this vision/strategic planning, color me very happy.

6:39PM UPDATE: Here's how the new master facility concept would sit on the current GNC/Bierman/Track footprint.