So, did something newsworthy happen yesterday?

Holy crap you guys, I'm going to try to pull together one of my famous (infamous?) Homer length Nugz posts. I'm a little worried I might pull a quad or something...I'm pretty out of shape on this length of a links post. Wish me luck!

DCT Moves On To Track

Are you hankering for more DCT related links even though Elliot gave you everything you could ever need here at TDG yesterday? Yes? Ok, try these out:

- Sandell must have read my mind.

- Fuller has his thoughts.

"We don't have the excuse any more of being young," Limegrover said. "We don't have the excuse any more of not having depth. There are no more excuses. I told the coaches that ... We've got to start saying, 'We belong. This is how we're going to do it. This is the idea we're going to have.' And then just move forward with it and get as good as we can at it. That was what the spring was for and those guys have carried that forward into the summer for sure."

This is a big statement to toss out there, especially with the coaching staff aware of DCT's decision. I like the confidence, and it's hard to get optimistic off this sort of statement and the fact that Kill hasn't downplayed this team in the same manner he used for the previous 2 squads. That said, I think we all know the issues the team still faces. But it's almost camp which means I'm fully #TeamSunshineRainbowsAndLollipops until the facts require me to be otherwise.

- In news that should shock absolutely no one, Kill continues to push for new facilities ASAP. I mostly included this link for the top picture associated with the article. Take a good look at that photo. Do you know what room the players are eating training table in? That's the Bierman gym. That's the gym some folks have suggested be used as the MBB practice facility. The gym that every team at the U pretty much fights for to use for one reason or another. Teague wasn't kidding when he said that the facilities upgrades were a need not a want.

- OPTIMUS CENTRAL: The Daily looks at how pressure and expectations are driving RaShede Hageman. The WWL Blog has an interview with Shede. Speaking of Hageman, here's an NFL Draft breakdown of his skillset and what it could mean for his draft prospects. Optimus also had one of the best quotes about the new targeting rule during the Media Days:

Me being [6-foot-6] and going full speed at a running back who's like 5-7, that's hard. And you have to understand that. I'm not trying to go head-to-head with somebody. But I feel like I have to fix my game a little bit. It's a new rule for our safety, so I can't hate on it. But it's kind of difficult when you're 6-6 and you go out at a running back or a quarterback. If I knock off somebody's helmet, now I'm going to get ejected? That's crazy.

Also, I wish I still got to eat like he does: 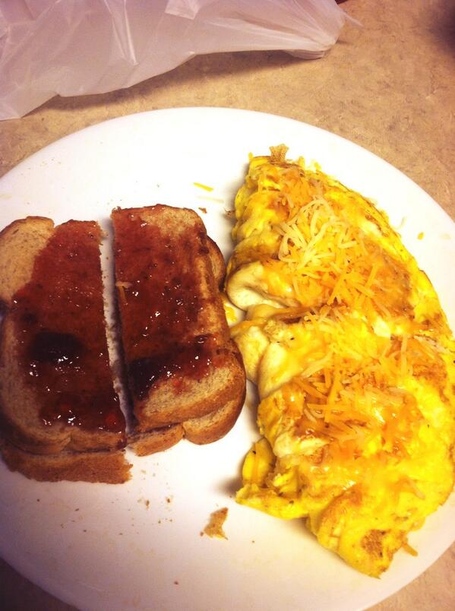 - Fuller has 5 Burning Questions about the Gophers as they enter fall camp. Question #1 is...well...it's not good.

- Stealing a bit from Norsk_Gopher, here are some preseason videos from Gopher Gridiron:

- Actually, these got marked private for some reason so no highlights for you!

- You may not be aware of this, but Berkley Edwards is fast.

- Coach Kill is feeling pretty good about the O-Line depth.

- I'll probably do more with this topic in the future, but the U needs to look at pressuring the U for better tailgate rules in the Stadium Village area like the Vikings are looking to get for the new Dome.

- Down with Goldy has a summary of B1G Media Days. It's worth the read for this paragraph alone:

If there was a king of the mountain sort of battle royale between B1G coaches, Fitzgerald is the heavy favorite to stand alone at the top. The guy is a tank. It would take something like a Pellini/Urban Meyer tag team effort to bring him down. Which of course would end with Meyer back-stabbing Pellini. Jerry Kill would need to quickly implant his brain into some kind of giant robot to even compete. Hoke would be trouble for the first 25 seconds until he tires.

- Tyler Mason of FSN has been doing a bunch of previews. I know GN has already linked to some but I don't have the time or desire to figure out which. So here they are in order of delivery:

Specialists are later today and Coaches are tomorrow.

- Gopher Sports has also been running their preview series:

- QB Chris Streveler's hometown paper has an interview with him.

- Shama says Kill is not concerned about the youth of the QB depth chart.

- Amelia has a great breakdown of the NCAA waivers process that the Gophers are spending a lot of time in this season. Summary? The NCAA sucks.

- Joe C. takes a look at QB platoons across the B1G and finds that youth aside, the Gophers are in better shape than many of their competitors when it comes to knowing who will be under center come Labor Day weekend.

- Northwestern created their own version of the Brock Vereen Show by having kicker Jeff Budzien crash the B1G Media Days.

- Speaking of Northwestern, here are 2 ICYMI items from the past month or so. First, Sippin' On Purple had a writer who got to play in a charity friendly with (and get SC Top 10 embarrassed by) Lionel Messi, probably the best soccer player in the world. That would be the same friendly where another former NU soccer player did this:

And Northwestern released a quality "This Is Sportscenter" parody:

- CBS Sports has predictions for every D1 football conference. We're talking all standings. The take on the Gophers? The majority (5 of 8) see Minnesota finishing above Iowa in the Legends.

- The new targeting rule was a big topic at every conference's media days. I think the idea behind the rule is sound but the execution (having refs make split second judgement calls that will likely depend more on how severe the hit looks than whether it was legal) of a rule that has a penalty of objection is...well, that's going to screw up some games. I'm not alone in thinking this, but Northwestern HC Pat Fitzgerald has the most creative solution I've heard yet. Institute a yellow card like system for warnings on these sorts of fouls.

- Don't ever change Johnny Football. Your bro-ness is an inspiration to us all.

- A link to every CFB team's media guide (at least the ones released online thus far).

- The Big Lead lists their Top 50 players in CBB coming into the 2013 season. Checking in at #28 is Andre Hollins.

- I'm very intrigued by this "Purple Pricing" thing that Northwestern is trying out. After a trial run with some basketball games, this version of a Dutch auction is going live for football. Basic summary is demand based pricing with a price guarantee similar to the one Orbitz uses. Worth a read.

- This might be my new favorite sports blog story. How can I summarize this quickly? The SBN site for the San Francisco Giants (McCovey Chronicles) had a commenter suggest a fun marketing idea in the comments of a post. She did it for fun, not expecting anything. The manager of McCovey Chronicles liked it enough to write a fun post telling the Giants to run with it. Giants fans loved the idea and started emailing the team, telling them to do it. The team and a vendor reached out to McCovey Chronicles and made the idea into a reality.

I heart you internet.

- The Wall Street Journal kisses the collective butts of everyone who loves the Twin Cities. I am cool with this.

- Are you a space nerd like I sort of am? Then you'll like this cool video NASA made by attaching cameras to the booster rockets of the Space Shuttle.

- One day I will get to play Bandon Dunes. And when I do, I'll get to play this sweet new putting course the likes of which the world has never seen.

- Here's the statsy breakdown of what SportsCenter was talking about in the last year. Tim Tebow was oddly not #1 on the list.