WHAT A SUPER DAY!

- Let's open with a nice player profile. Fuller has a great look at RaShede Hageman and his growth as a person and leader.

Principal Todd Goggleye walked into a special education class last month at Kennedy Elementary School in Willmar, Minn., wondering how the kids would react to his 6-foot-6, 312-pound guest.

As soon as they saw Ra'Shede Hageman, their eyes lit up.

Three students threw themselves into his massive legs, attaching like suction cups.

"They had never seen a guy that big," Goggleye said. "He met them for the first time and was already getting hugs."

It's all fun and games until you terrify a little kindergartner Ra'Shede. Trust me on that one.

As the Gophers open fall camp Friday, Hageman's development as a team leader will be on display. His maturity off the field was apparent this summer when the former Washburn standout spoke to kids at places like Kennedy and McRae Park in Minneapolis, where he once played as a youth.

"I just wanted to share my story and really just give little kids an open perspective of who I am off the field," Hageman said. "It was different because in past years, I really wasn't doing much community service."

Hageman spoke publicly this offseason more than ever about his struggles with academics and attitude in college -- and about his emotional childhood before being adopted 16 years ago by his current parents, Eric Hageman and Jill Coyle.

Hageman, a youth studies major, is on pace to graduate in December. He has come a long way since being suspended by former Gophers interim coach Jeff Horton for the last three games of the 2010 season for poor academic performance.

"When I took the job here, it was questionable whether he was going to be in school and how all that stuff was going to work," said Gophers football coach Jerry Kill, who was hired three years ago. "What he's done ... to where he is now is a tremendous story."

Kill met with Hageman, an All-Big Ten selection last season, after last season and encouraged him to reach out to his community.

More than 200 kids heard Hageman speak and answer their questions for about 20 minutes. He dug deep into what he went through as a troubled youth as well as the importance of work ethic and being "obsessed" with not just sports but schoolwork, too.

There are a lot of platitudes I could spout here. In the end, I'm just really happy for Ra'Shede, glad that he took the chance Coach Kill gave him, and excited for him to have a great senior year before heading off to the NFL. Just a great story all around. Hats off to you Ra'Shede!

- Joe C. jumps on the Year 3 story train. He does a nice job highlighting why Coach Kill's "2 recruiting class talk" is mostly expectation setting (though he doesn't say so explicitly):

But Kill is a realist. When first hired in December 2010, he said this rebuilding effort would take patience. With camp opening Friday, he happily details the program’s progress but says this is more comparable to where Northern Illinois was in Year 2.

In Kill’s second season at Northern Illinois (2009), the Huskies went 7-6, losing a hard-fought game to Wisconsin and defeating Purdue before going 5-3 in the Mid-American Conference.

"We were just fortunate at Southern and Northern to put three recruiting classes together that were really good," Kill said. "So we’re really kind of in Year 2 at our place."

That said, Kill keeps calling this year’s incoming freshman class his "second recruiting class," even though it’s technically his third.

Is Kill muddying the water a bit to relax expectations? Definitely. Does that matter? I don't think so. This is a tougher job than he inherited at Northern and the schedule he faces is tougher as well. I expect the usual suspects to make a big thing of this as the year continues. Some more Kill quotes that I wanted to highlight:

"And I think this is the first summer and spring they’ve really bought into that wholeheartedly as a team. That doesn’t guarantee you any wins. It guarantees you the opportunity to move your program forward."

"We need to keep climbing the mountain," he said. "We need to win more Big Ten games; we haven’t done that in a while.

"I feel cautiously optimistic that can happen, but we need to stay healthy. We need one of those signature wins so to speak, where you get over the hump in a critical game and win by a field goal. It seemed like that happened at Northern, that happened at Southern, and now we need to have it happen here at Minnesota."

More clear signs that while Kill feels this team is improved, he isn't ready to let expectations run wild just yet. Meanwhile, I AM SO EXCITED THAT FOOTBALL IS HERE DO YOU ALL HAVE ANY IDEA HOW EXCITED I AM THIS IS JUST THE COOLEST EVER!

- FSN finishes their preseason previews with Special Teams and the Coaches.

- The Coaches' Poll came out yesterday, which gave a Pioneer Press' sports producer the chance to write this inane and downright idiotic gem:

Minnesota Gophers fans were not expecting Jerry Kill's team to earn a ranking in the first college football poll of the season. But some diehards may have held out hope that last year's Meineke Car Care Bowl runners-up would attract a few votes from the coaches.

I'm sorry Kevin, but "Uh...no." is the proper response to this ridiculously overstuffed strawman you just put out there. Even the most optimistic of Gopher Holers wouldn't try to make this claim.

- 4 start PG Quentin Snyder decommited from Louisville. His very first offer following the news? Minnesota. Pitino is everywhere. As a side note, I really hope he starts signing some of the big recruits. Not just for the bball impact. But because I want to start making unnecessary "in ur base, stealing ur dudez" references in situations like this.

- Myron brings national ESPN attention to just how awesome Mo's transformation has been.

- Joel Maturi gave an interview to the St. Cloud times. He called out the Twin Cities media (in that polite Joel way). Some folks might make a thing out of this. I don't think we should care.

- Minnesota fans, we need a better showing at the BTN Big10K in Chicago. Anyone want to run it with me next year? I've heard its a good time.

- BHGP also mocks a Nebraska sports dude's Iowa preview. Seriously, based on the headline I assumed this too would be Batshit Insanity. Instead? Regular Nebraska fan insanity.

- In news that should surprise no one, Big Ten hockey has some of the country's top drawing teams.

- The NCAA tweaked their bracketing rules for the NCAA tournament. It really only matters if you care deeply about doing your own bracketing predictions. The rest of us will let Lunardi learn it.

- Michigan seems intent on squeezing it's fans for every dollar with their new dynamic ticket pricing plan. Incidentally, am I the only one that hears "dynamic pricing" and immediately hears "fans getting money ripped from their wallets and purses?"

- In the world of overdone football fields, I have to nominate the one at Texas A&M - Commerce for coolest and least offensive. 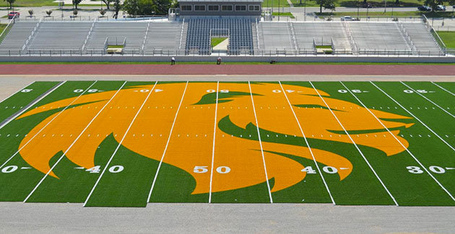 - Camp Randall's new scoreboard is looking pretty decent. An interesting note? If they'd decided to have that be one single video board, it would have been the largest scoreboard in college FB by almost 1000 sq ft.

- There is a podcast devoted to reviewing Saved By The Bell episodes. I love the internet.