It's back! Your favorite statistical overload has returned for more season and game prognostication goodness!

You guys didn't think you'd get to game week without a heavy dosage of stats from your's truly, did you?

Another year of college football modeling (play-by-play data courtesy of collegefootballdata.org and cfbstats.com) and countless hours of extracurricular enjoyment for me. Actually, it was only a handful of hours but who's counting?

I'm especially proud of the single game win probability model I've built this year: the logit model uses statistics adjusted for strength of opponent against the national averages, with additional techniques to help mitigate the effect of outliers on the model. In short, it's pretty damn robust -- built using test data from a 20% sample of all FBS home games from 2005-2012 and validated against the full sample of home games over that time period. Yes, I only modeled for the home team; I ain't got time for home vs. away point adjustments.

Where things predictability get a little murkier is the introduction of year over year modeling of all kinds. I won't get into the details of why this is (though as a seasoned and savvy reader, I'm sure you can come up with an educated guess); just know that there's a large distinction between correlation and determination. Several readily available statistics have good (but not great) year over year correlation but the determination or predictive power of said variables isn't so great using standard parametric techniques. I'm still on the hunt for better mousetraps in that regard, though that's looking more like an offseason project (again) and frankly, I'm still only in my second year of modeling college football. Expect a constant cycle of iterative revisions.

So, the following chart and table represent my effort to simulate the season based upon A) a predictive attempt to score key logit model variables from the previous year B) applying said scored variables into the logit model for single game winning percentage probabilities and C) simulating 100,000 seasons based upon those assigned probabilities. Consume with caution, as the logit model is strong, though the predictor variables aren't yet (and won't be until about week 5 or 6, since I'm still regressing off last year's data until then). GIGO.

* Ed. note (from Matt, not GN): I found that I missed a few factors in this week's modeling that affect the results of the simulation. I'll have the fix in next week, just know that it actually does change the results... for the better (and no, this what not at all intentionally and/or data manipulative.) 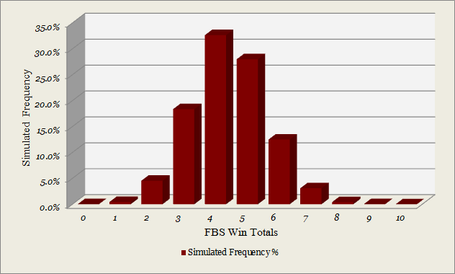 Yes, the computers all hate us. Much like Matt Hinton's breakdown using Brian Fremeau and Bill Connelly's F/+ stats and the Vegas over/under win totals, my simulations peg the Gophers at approximately 4.5 FBS wins and 5.5 wins overall -- right on the edge of fringe bowl territory.

I'd be remiss to point out that the above chart and table look almost identical to what I simulated last season, so the axiom of "better team, maybe not a better record" certainly appears in play. I will, however, point out that the year over year linear predictors tend to over-weight key variables that disproportionately benefit certain teams -- namely San Jose State and Wisconsin. There's simply no telling how much the full scale staff turnover at both spots, plus key offensive losses to the NFL Draft, will have an effect on their performances this season. The same applies to Penn State and NCAA sanctions.

The Rebels are one of the two almost sure FBS victories on the schedule. We're favored by double digits at home for the first time since the NMSU game in 2011, a game that I wish I never had to reference again but will undoubtedly have to over the next week or so.

I'd also like to point out the early season synergy between model and Vegas line/over-under. Methinks bookies use number geeks like me to crank some of these out versus using a big board.

Few things embody fall more than pumpkins and college football. And booze. Sometimes, we get all those things in one.

Thursday night is one of those times, as the libation of the college football kickoff and start of the most glorious season of all is Southern Tier's Pumking.

Yes, I'm pretty sure I used this same beer to describe Illinois last year but who cares? Pumking is the undisputed champ of the pumpkin/yam brews from my POV, with a richness and heft few other beers of its ilk can match. I look forward to this selection from Southern Tier every year, much like I salivate in anticipation of the upcoming return of my beloved sport.

With only 2 days remaining, I say "Hats Off to Thee!" and a hearty "cheers!" to all my Gopher brethren!