I don't know about you, but I can't get enough of all the links.

Share All sharing options for: Golden Nugz - 8.5.13 - ALL OF THE PRACTICE LINKS

It's been 3 days since our last Nugz and 3 open practices happened in that time. The result? A ton of news, pics, and videos to pull together. Football is actually here. Enjoy! =)

- Fuller and Mason both focus on depth in their PiPress and FSN recaps.

- Sandell said the team passed the eye test for the first time under Kill.

No. Nelson is the guy"@BMishuk: is this 'controversy' for real? "Mitch Leidner leading the first-team offense out to start a team drill.'"

- The Fargo media gets in on the Day 1 excitement.

- VINE VIDEOS (scroll over video for a description):

- ALL THE LB STORIES! Joe C. says De'Vondre Campbell made a big impression on the coaches and media on Day 2. Sandell agrees. Tyler Mason says Damien Wilson tries to mold his game after Ray Lewis. Even the team blog gets in on the LB action. Marcus says the LB competition is up for grabs.

- MOAR QB ROTATION STORIES: Joe C. gets in on the MINIONALERT.GIF action, although it's a bit more tempered than a true #QBGAZE story.

- The AP says Phillip Nelson is back with confidence. Shooter talks to PN9 and finds out that he's not a big Twitter guy.

- Joe C. says the Gophers are still weighing their options for a #3 QB and that the loser of the Jones/Streveler competition might play WR (plus other post practice notes).

- Sandell has a ton of notes from Day 3.

- Podcast of Justin Gaard's live coverage of practice #3 for KFAN.

Everything else Gopher Football

- Donnell Kirkwood is looking for a breakout year, but for the team more than himself. I loved one of the videos I saw of him post practice where he said 1000 yards isn't the goal, winning is the goal. He noted that 1000 yards isn't worth much if he loses a bunch of fumbles or misses blocks.

- RaShede Hageman is driven by the expectations for his performance coming into the season.

- Sandell takes a look at Tommy Olson's work at center.

Funny how some think they pulled the offer. I'm Flattered. But I'm a Gopher.. pic.twitter.com/osVdNHUo8h

- Brock Vereen talks about his senior year goals with Chris Monter of GopherHole.

- Steve Pesek of Gold & Gopher has 3 questions for the Gophers.

- The Mankato Free Press has a piece on Phil Nelson.

- The Gopher Football blog has a post on Chris Streveler.

- TOUT VIDEO FROM PIPRESS: Marcus has a lot of video interviews from the last few days up. Find them all here.

- Gopher recruit Payton Jordahl is getting lots of love in the mail.

- Mankato Jesus is on the BTN bus:

- The Gopher FB equipment guys are getting some love:

- Johnny Manziel had a totally flattering new story break over the weekend. SBN looks at all the angles and Good Bull Hunting has the proof that Johnny Football cheated:

- Another Gopher recruiting target narrows his list and keeps Minnesota on it. The latest? Wade Baldwin. Incidently, Amelia has been on fire with recruiting stuff so you should keep an eye on her blog in case we don't recap some of it.

- Those weird NBA unis with sleeves? Not going away.

- The Dolphins tried something different. 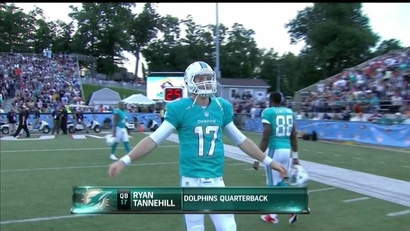 - Arizona has a new practice facility.

- It's good to be Bama when you're recruiting.

- I know many of you like beer. If you do, you might find this story about the turn-around of Cold Spring Brewing to be interesting.

- A key Twins prospect has too many showoff doubles and it has some in the organization worried.

- I'm glad to see that Bama fans are such good spell checkers. 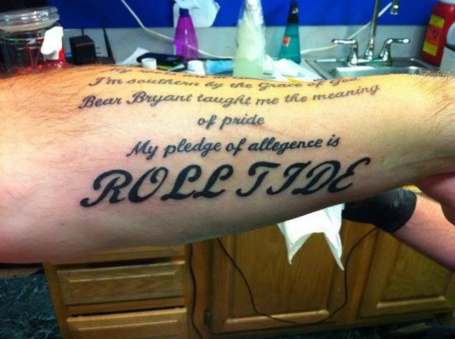