The meme selection committee ran the RPI, record vs. the Top 50, and non-con SOS and came up with the following Sweet 16 faceoff for Gopher Football's _______-I memes.

Hello their meme fans! Thanks again for all the great suggestions for the Maryland-I Meme Contest. There were 14 TDG community members who entered memes, but there could be only 1 TDG T-shirt winner. The lucky individual, selected at random via Excel's random number generator, was Red River Gopher. Congrats RRG!

But that's not the end of the meme contest. There are still bragging rights to be awarded. And rather than pick 3 or 4 memes and having you all decide by voting in a single poll, we decided to create a Sweet 16 bracket of Gopher Football memes. Here's how this process will work:

- Memes were seeded 1-8 in two regions(Maroon and Gold).

- Each pairing will get it's own post with a poll. The poll will be left open for 36 hours.

- Here is the schedule for the voting:

So without further delay, here is the Gopher Football Meme Bracket for the 2013 season (click for full size version): 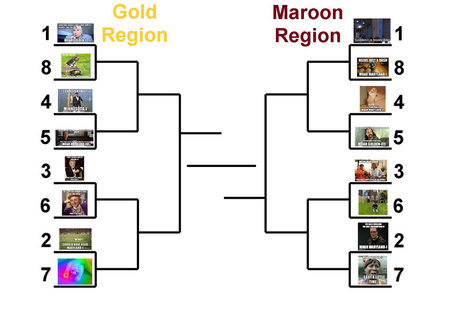 NOTE: The individual voting posts will have full size images.

WHICH MEME GOT HOSED BY THE SELECTION COMMITTEE?

WHO HAS THE EASIEST PATH TO THE TITLE?

WHO IS YOUR FAVORITE TO WIN?