The requisite annual non-conference game against a non-AQ opponent that drives fear straight into the collective heart of Gopher fans. Or should it?

Back, after FCS week (or weak, as GoAUpher misspelled in a Freudian slip) modeling hiatus.

I'm gonna be real upfront here: my year over year predictors that feed these early season models DO NOT like San Jose State. Knowing how the models are built and work, I can intuitively understand why. In general, teams that

tend to not do well the following year. All of the above factors apply to SJSU, indicating that 2013 is likely to be a letdown for Spartan fans. With 3 prospects in David Fales, Noel Grigsby and Bené Benwikere for the 2014 NFL Draft, I can only imagine what the models would project for SJSU next year.

Complicating matters further is an early season schedule in which the Spartans arrive in Minneapolis having only played one FBS opponent -- and not playing all that well, I may add. Weighting factors are not as awesome/accurate when one participant is weighted at 40% of in-season data while the other is 1/5th. Things are uneven and murky, so take the following with the proper granules of salt.

Minnesota enters this contest having scored 4 offensive touchdowns in each of its first 3 games while simultaneously under 2 TDs per game under close conditions. SJSU reached the endzone only once and gave up 4 touchdowns to Stanford a few weeks ago. I bring these figures up as but one data point.

I really don't know what to expect from SJSU, since they've only played one FBS opponent to date and my preseason projections explain only 50-60% of the variance. There's every possibility that a supremely talented QB1 will outperform said projections and play much better -even on the road- against a team not in the AP Top 5.

On the other hand, I do sort of know what the Gophers are going to do, with or without Philip Nelson. They're going to run the ball, and run it often. And they'll probably have some success at it, since they offensive line is generating over 3 ALY per carry (that's good) against FBS competition to date.

The key, of course, is how Mitch Leidner -the likely starter on Saturday due to Nelson's hamstring injury- can manage the offense without making mistakes, Job A when it comes to playing QB1 for Jerry Kill. The depth chart at quarterback for Minnesota is frightening and gives one pause, though the likelihood San Jose State has another first round caliber QB is next to zero, so that's a wash.

That's why, in honor of Ponce and Eskridge, I'm rolling with Bell's Expedition Stout, a hearty brew that cellars well and can supposedly make the trek with you in a backpack, if you're so inclined. 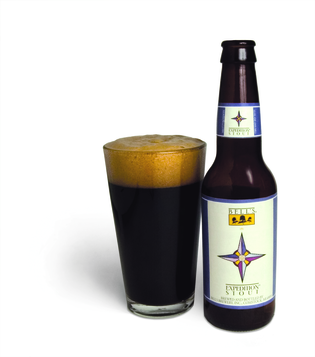